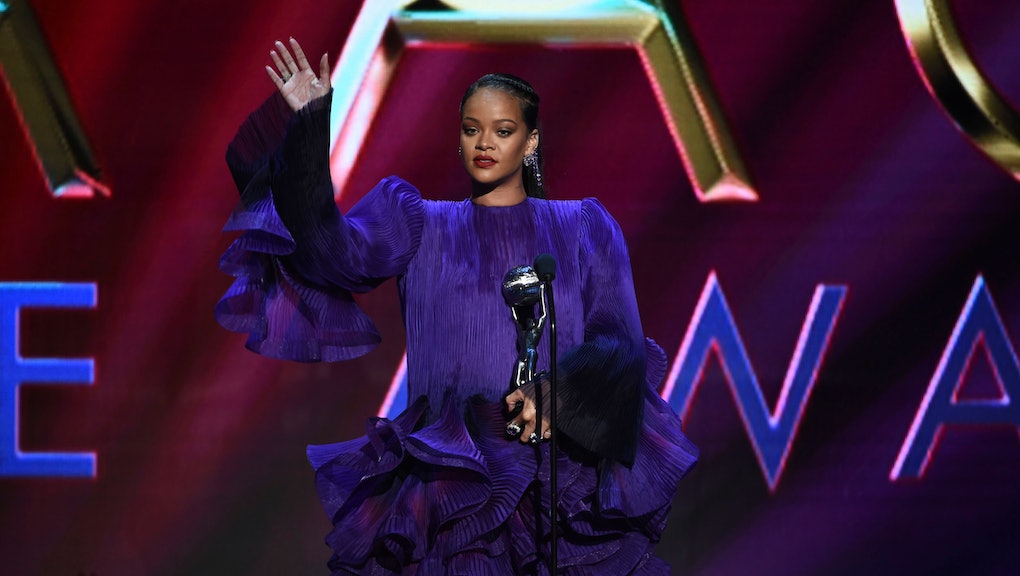 We do not seem any closer to R9 than we were last week, but Rihanna continues to trailblaze her own path outside of the music industry. On Saturday, she accepted the President’s Award at the NAACP Image Awards, which was awarded for her track record as a “stellar public servant” and “tremendous record as an activist and philanthropist,” alongside the hit-making career. In an inspiring acceptance speech, she called on broad intersectional unity to solve what ails the world.

“We can only fix this world together. We can’t do it divided, I cannot emphasize that enough. We cannot let the desensitivity seep in,” she said. “The ‘if it’s your problem, then it’s not mine. It’s a woman’s problem. It’s a black people problem. It’s a poor people problem.’” She then asked the room how many attendees have partners, colleagues, or friends from other races, sexes, or religions. ““They wanna break bread with you right — they like you. Well, then this is their problem too.”

Rihanna implored viewers to bring these friends under the tent to help fight against racist police violence and other egregious forms of injustice. “So when we’re marching and protesting and posting, about the Michael Brown Jr.s and the Atatiana Jeffersons of the world, tell your friends to pull up.”

Named for her grandparents, Rihanna’s Clara Lionel Foundation is her primary vessel for philanthropy. It was founded in 2012, and focuses on providing basic access to education and emergency relief around the world. Recognizing that the prolonged devastation of climate change will require more sweeping infrastructure changes to prepare for future disaster, CLF has taken a different approach to aid. It aims to take a more proactive approach toward rebuilding Caribbean nations in anticipation of future hurricanes, rather than simply resetting after Hurricane Dorian last year.

Rihanna ended her acceptance speech on a hopeful vision forward in combating systemic racism. “Thank you to the NAACP for all of your efforts to ensure equality for our communities, thank you for celebrating our strength and tenacity. We have been denied opportunities since the beginning of time, and still we prevail,” she said. “Imagine what we could do together.”

More like this
What's next for the #FreeBritney movement's most devoted supporters?
By Jamie Lee Curtis Taete
The reason Simone Biles quit was more heartbreaking than we could've ever imagined
By Brandon Yu
R. Kelly was found guilty on all counts, and could serve decades in prison
By Brandon Yu
Stay up to date