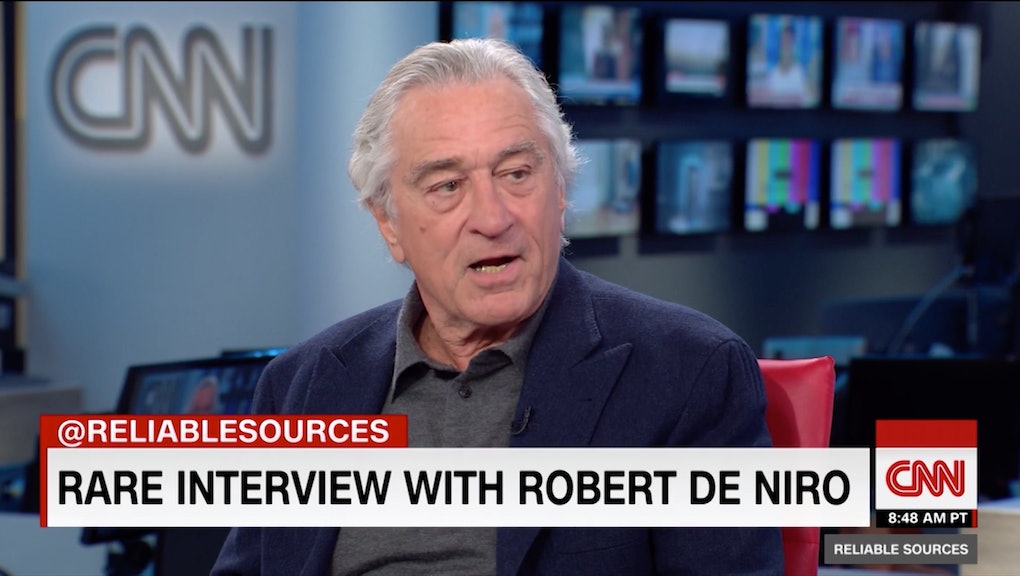 On Sunday morning, Robert De Niro went on CNN and told the president and the Fox News pundits who support him to fuck off.

The famously frank actor was a guest on Brian Stelter’s show “Reliable Sources,” which focuses on analyzing the news media. De Niro was in the middle of a torrent of criticism when he dropped the f-bombs, questioning Donald Trump’s mental fitness and calling him a power-hungry despot.

“When you say that, folks on Fox come after you,” Stelter pointed out.

His outburst caused a stir in the CNN newsroom. “Well, you know, this is cable, so it’s not an FCC [Federal Communications Commission] violation, but it is still a Sunday morning,” Stelter said. Someone off camera yelled, “Whoa!”

De Niro has been one of Trump’s most explicit and unapologetic critics throughout his candidacy and presidency. In 2016, he called him “totally nuts” and “a natural disaster.” He released a video before the election saying he wanted to punch Trump in the face.

At the 2018 Tony Awards, De Niro sauntered to the onstage microphone and declared, “I’m gonna say one thing: Fuck Trump.” The audience at Radio City Music Hall gave him a standing ovation. Just last week, at the New York Film Festival premiere of The Irishman, De Niro told Variety he hopes the president gets impeached.

Fox News responded to the actor’s angry words, calling on CNN to explain why the profanity aired on Sunday morning “without an apology or acknowledgement,” but the network hasn’t commented. Though he apologized on-air, De Niro hasn’t walked back his statements either. For the moment, Trump seems to have bigger things to whine about and hasn’t addressed the incident on Twitter.

De Niro’s unbridled rage seems to resonate with many Americans, who feel frustrated that Trump’s transgressions have gotten more serious, yet his removal from office seems like such a long shot. The actor summed it up in true tough-guy fashion: “We are in a moment in our lives, in this country, where this guy is like a gangster,” he said. “We say over and over again, ‘This is terrible, we’re in a terrible situation, we’re in a terrible situation,’ and this guy just keeps going on and on and on without being stopped.

More like this
Megan Rapinoe, Nneka Ogwumike, and 500 more elite women athletes took a stand for abortion rights
By Keith Nelson Jr.
Merely changing ‘The Activist’ from game show to documentary misses the point
By Shamira Ibrahim
Uma Thurman recounted her abortion as a teen in a powerful rebuke of the Texas law
By Kara Weisenstein
Stay up to date