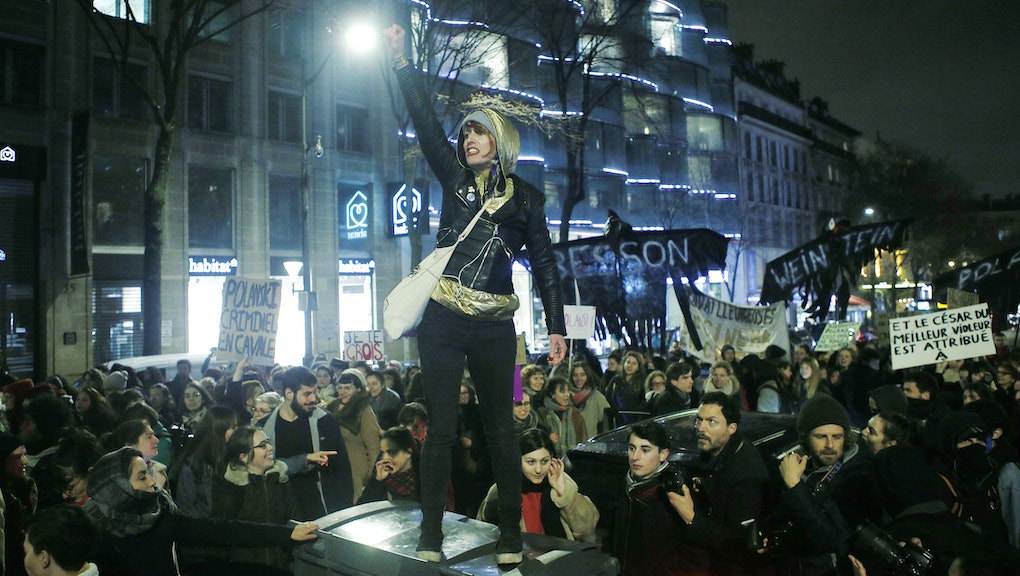 One week after Harvey Weinstein was found guilty of a criminal sexual act in the first degree and rape in the third degree, the top French film awards handed their directing prize to Roman Polanski. This resulted in uproar at the 45th César Awards, where the director and star of Portrait of a Lady on Fire, Céline Sciamma and Adèle Haenel, led a small walk out of the awards. Other women followed suit, echoing the hundreds of protesters against Polanski’s recognition in the Paris streets that evening.

Polanski, whose latest film An Officer and a Spy was nominated for 12 awards at the Césars, has been a U.S. fugitive of justice since 1978 when he pleaded guilty to having sex with a 13-year-old girl. He’s taken refuge in France for most of the time since his fleeing his sentencing, where he maintains dual citizenship. Following the nominations, a number of French feminist groups and more than 200 members of the film industry called for “profound reform” of the Césars academy. The entire leadership board collectively resigned just 15 days before the awards.

Sciamma and Haenel’s Portrait, which expanded stateside in February, was also up for 10 César awards that night, including Best Director and Actress. As they left the Théâtre du Châtelet and walked through the lobby, Haenel clapped and said “Bravo, pedophilia!”

In an interview with the New York Times prior to the awards, Haenel spoke about being the first prominent French actress to speak out about abuse in her country’s movie industry. Last year, she accused the director Christophe Ruggia of sexual harassment and inappropriate contact beginning when she was 12 years old. Haenel also strongly condemned the Césars’ decision to nominate Polanski.

“Distinguishing Polanski is spitting in the face of all victims. It means raping women isn’t that bad,” she said. Haenel also highlighted that while the #MeToo movement took hold in other international film industries, France has lagged far behind in its progress. “It is one of the countries where the movement was the most closely followed on social media, but from a political perspective and in cultural spheres, France has completely missed the boat,” she said.

Prior to the show, hundreds of protesters gathered outside the concert hall, pulling down a security barrier and clashing with police who fired tear gas. Their signs were unambiguously targeting Polanski’s recognition. Some of them read: “shame on an industry that protects rapists”; “victims, we believe you,” and “no to impunity."

Since fleeing his sentencing in 1978, Polanski’s career largely went on uninterrupted in the meantime, with the Oscars awarding him Best Director in 2003 for The Pianist. Like with his award for An Officer and a Spy, he did not claim it in person. Only after the #MeToo movement laid bare the systemic rot of sexual abuses in the film and entertainment industry did the Academy revoke Polanski and Bill Cosby’s membership in 2018.

The Oscar-winning star of his latest film, Jean Dujardin, along with the entire cast and production team, boycotted the awards in solidarity with their director. Polanski released a fiery statement, turning to the subject matter of his latest film about the Dreyfus Affair as a shield. “What place can there be in such deplorable conditions for a film about the defence of truth, the fight for justice, blind hate and anti-Semitism?” he said. “These fantasies of sick minds are treated as established fact,” Polanski said of the expected protesters.

As it turns out, the Oscars are evidently not the only awards show capable of hosting an “own the libs” referendum, like Green Book’s controversial win in 2019. In fact, many have pointed out that the European film circuit, the same one which honored Joker with the Golden Lion at the Venice Film Festival, tends to honor far more odious transgressions than what will pass as awards controversy in the U.S. New films from Polanski, Woody Allen, and Nate Parker — all filmmakers prominently accused of sexual abuse — premiered their latest films at Venice last year.

The outcomes of award shows are open to all sorts of value projection, but there’s no clearer message that the women of the voting body don’t matter when films not made by sex criminals are sitting right there as an alternative. It remains to be seen if the 45th César Awards could be a watershed moment in how the international film industry weighs the significance of despicable acts, or just a disheartening reminder that progress isn’t linear.

More like this
In 'Roadrunner,' Anthony Bourdain shows us the beauty of the mundane
By John Saward
8 shows like 'Ted Lasso' to watch if you need more feel-good TV
By Brandon Yu
Phoebe Bridgers and John Mulaney announced tour dates and the internet imploded
By Chloe Stillwell
Stay up to date