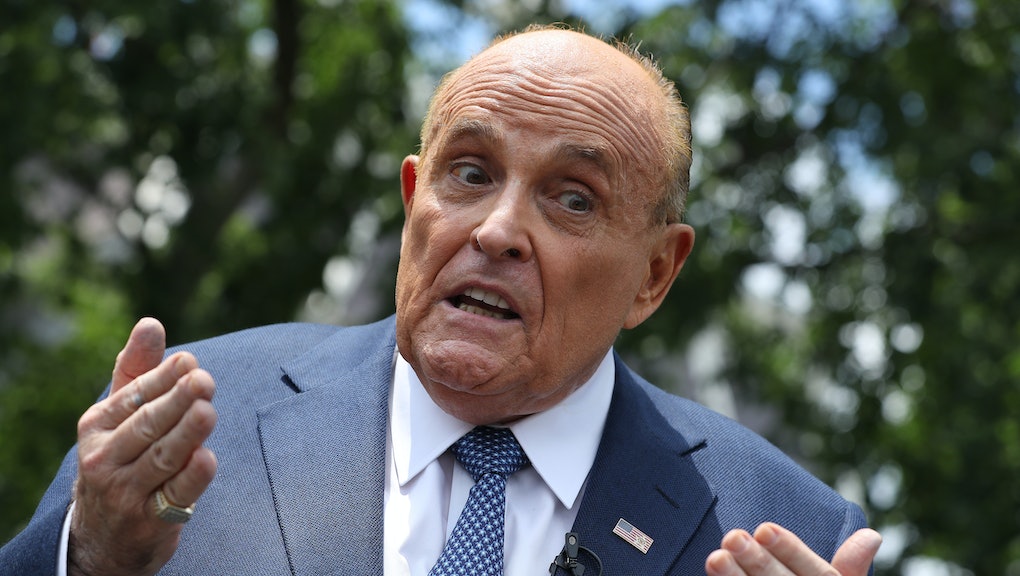 As numerous studios delay projects and grapple with new filming techniques during a pandemic, Sacha Baron Cohen appears to be surging ahead with the next season of Who Is America? His latest victim is former mayor and Donald Trump’s personal attorney, Rudy Giuliani. In an interview with Page Six, Giuliani says that he called the NYPD on Cohen, who attempted to tape an interview clad in a pink bikini.

As he tells it, Giuliani thought he was summoned to Manhattan’s Mark Hotel for a serious interview about the Trump administration’s floundering response to COVID-19. The purported outlet offered him payment for the interview, but he asked that it be redirected to the Stephen Siller Tunnel to Towers Foundation. It began normally enough, with a woman interviewing Giuliani in front of a lights set-up and camera, before Cohen came charging in.

“This guy comes running in, wearing a crazy, what I would say was a pink transgender outfit,” Giuliani told Page Six, emphasis mine. “It was a pink bikini, with lace, underneath a translucent mesh top, it looked absurd. He had the beard, bare legs, and wasn’t what I would call distractingly attractive.”

Giuliani says that he didn’t recognize the new interviewer as Cohen at this point, but immediately reported it to the police, causing Cohen and his team to flee. The comedian, who’s duped any number of political figures into interviews from Bernie Sanders to Ron Paul, was apparently on Giuliani’s radar. “I thought about all the people he previously fooled and I felt good about myself because he didn’t get me,” he told Page Six. We’ll have to see if the footage bears that out!

Then, in a completely dizzying twist, Giuliani admits to being a Borat fan and attempts Borat voice on the record. “I am a fan of some of his movies, Borat in particular, because I’ve been to Kazakhstan. [Adopting a Borat accent, Giuliani repeats a famous line from the movie: ‘She is my sister. She is number four prostitute in all of Kazakhstan.’] That was pretty funny,” he told Page Six. The meme format will forever be updated to <Rudy Giuliani doing Borat voice> and I'll be taking no further questions on the matter.

Cohen’s been a steady presence in the news lately, with his most recent publicly documented stunt occurring at the far-right “March for Our Rights 3” rally in Olympia, Washington. He Trojan-horsed his way onstage to lead the crowd in a sociopathic singalong about the “Wuhan flu” and violence against journalists, among other things. He also faces a nagging lawsuit from former Alabama Senate candidate and alleged sexual predator Roy Moore, for a 2018 segment in which Cohen used a fake device to detect pedophiles.

More like this
Caitlyn Jenner's campaign is off to a great start!
By Rafi Schwartz
Caitlyn Jenner is officially running for governor of California for some damn reason
By Rafi Schwartz
LeVar Burton, patron saint of patience, explained cancel culture to a clueless Meghan McCain
By Kara Weisenstein
Stay up to date