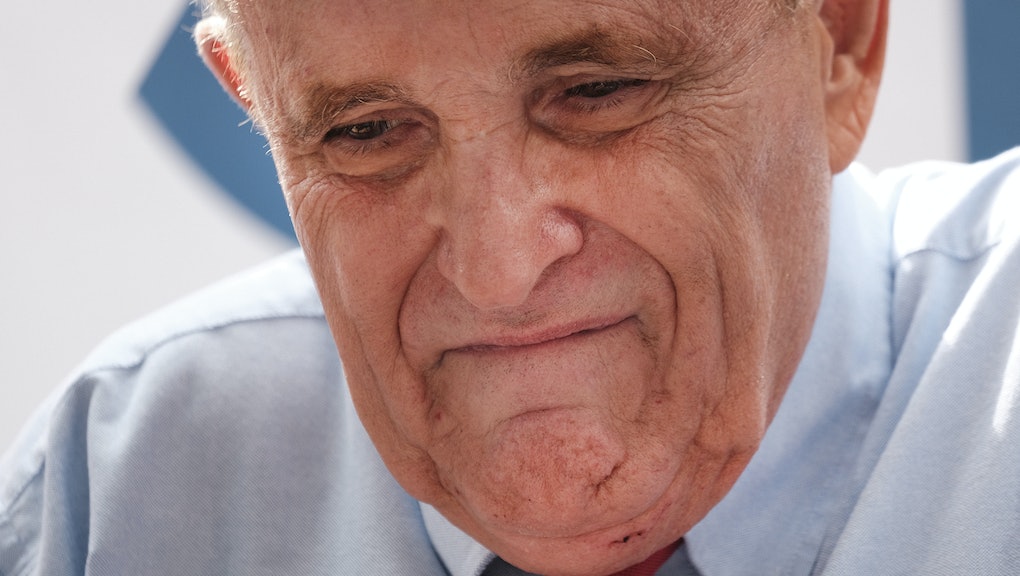 Former federal prosecutor, New York City mayor, and quivery-jowled Trump administration "lawyer" Rudy Giuliani has been barred from practicing law in New York State for his many, many, many shameless lies regarding the 2020 presidential election. In the hilariously dry-titled "the Matter of Rudolph W. Giuliani," the New York State Supreme Court's First Judicial Department ruled that Giuliani's "demonstrably false and misleading statements to courts, lawmakers and the public at large" regarding former President Donald Trump's claims of voter fraud were grounds to immediately suspend the New York law license he'd earned more than 50 years earlier.

For over 30 pages, the ruling lists in excruciating detail the various lies, misdirections, and half-truths Giuliani spewed in the service of trying (falsely) to anoint Trump the victor in 2020. Particular time is spent in regards to the wholly untrue allegations of election fraud in Pennsylvania where, the ruling states, Giuliani "fail[ed] to provide a scintilla of evidence for any of the varying and wildly inconsistent numbers of dead people he factually represented voted in Philadelphia during the 2020 presidential election."

The ruling also took Giuliani to task for his repeated efforts to undermine faith in Georgia's electoral system — one of the inflection points that the Trump team has systematically attempted influence in its broader effort to overturn the entire 2020 race. Per the ruling:

Respondent stated that dead people voted in Georgia during the 2020 presidential election. He claimed that he had the names of 800 dead people who voted based upon the number of people who had passed away in 2020. Respondent further stated that this number was really in the thousands. At another point he claimed that 6,000 dead people had voted. This claim was refuted by the Georgia secretary of state. After reviewing public records, the secretary of state concluded that potentially two votes may have been improperly cast in the name of dead voters in the 2020 election and those instances were being investigated. Respondent's claim of thousands of dead voters is false. So is respondent's claim of 800 dead voters.

Crucially, the decision to bar Giuliani from practicing law links the former president's chief attack dog's exponentially deranged post-election rhetoric to the attack on the U.S. Capitol Building on Jan. 6.

"One only has to look at the ongoing present public discord over the 2020 election, which erupted into violence, insurrection, and death on Jan. 6, 2021, at the U.S. Capitol, to understand the extent of the damage that can be done when the public is misled by false information about the elections," the ruling said.

At this time Giuliani has not publicly responded to the decision. He is currently in the midst of a number of separate lawsuits regarding his work to overturn the 2020 election results, including a $13 billion case brought by Dominion Voting Systems Inc., whose machines he claimed were used to subvert a(n entirely untrue) Trump victory. Giuliani had welcomed the Dominion suit, claiming it would "will allow me to investigate their history, finances, and practices fully and completely."

That might be a little harder if he plans to do any of that in New York State.