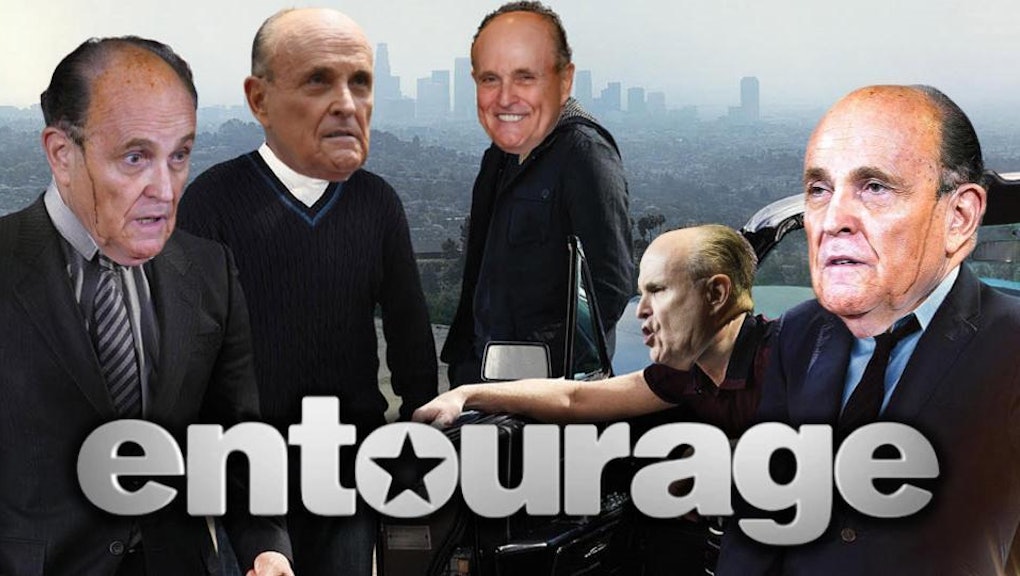 Rudy Giuliani's entourage is shrinking, but his bills are not

Picture the following scenario: You're out on a date (remember those? Wow!). At a certain point in the evening, the other person asks what you do for a living. Now, imagine you have to tell this person — a person with whom you are having a lovely time and whom you would like to see again — that you are a full-time, professional member of Rudy Giuliani's entourage. There are plenty of ways to humiliate yourself in front of a prospective romantic partner, but for the life of me, I can't think of one so unctuously off-putting as admitting out loud that you have placed yourself in the employ of one Mr. Rudolph William Louis Giuliani — a man who farts and melts and revels in being the loudest, most unhinged lunatic in the cigar bar.

Well, no longer. Because, apparently Giuliani — a man once considered (briefly) for a Cabinet position in former President Donald Trump's administration — has been forced to downgrade his usual crew of five, who typically orbited the former New York City mayor as he went about his day. According to Politico, Giuliani has been forced to axe multiple staffers and associates recently, in part to save money as he stares down the barrel of a $1.3 billion defamation suit over his role amplifying Trump's post-election conspiracy theories.

Giuliani, whose Gordon Gekko-esque lifestyle of booze and cigars radiated an aura of Manhattan wealth, has reportedly been somewhat strapped for cash lately, possibly related to Trump's refusal to pay his one-time top attorney for work done on his behalf. That characteristically Trumpian bill-stiffing has coincided with Giuliani's own legal woes, which culminated in a surprise FBI raid late last month.

It's gotten so bad, it seems, that a number of Giuliani's political pals have started actively lobbying Trump to dip into the $250 million fund Trump raised after losing the election, to help cover Giuliani's mounting legal expenses.

While Giuliani's exact net worth is hard to pin down, multiple estimates put it in the ballpark of $45 million. However, his expenses — including $42,000 a month to his ex-wife Judith — coupled with the fact that by taking on Trump as a client, he resigned from his well-paying, high-profile position at the firm Greenberg Traurig suggest that his financial problems could be more acute than his estimated worth would imply.

Either way, it seems like Giuliani has found a way to keep his expenses at least slightly lower, to the detriment of first date stories everywhere.

More like this
Donald Trump, king of scams, says Bitcoin is a scam
By Rafi Schwartz
Marco Rubio wants to give survivors of domestic terrorism … one year of student loan relief?
By Rafi Schwartz
Newly uncovered IRS documents reveal exactly how the rich swindle the rest of us
By AJ Dellinger
Stay up to date