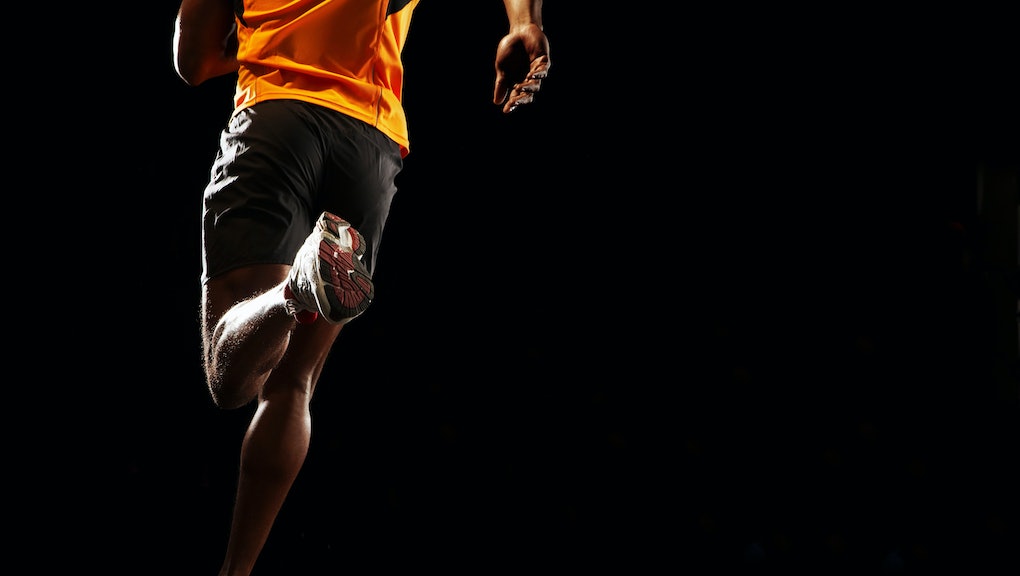 Running shoes: How science can help you to run faster and more efficiently

Long-distance running times are dropping — and the first sub-two hour marathon was completed recently by Kenyan athlete, Eliud Kipchoge. Some are arguing that innovations in trainer design are playing a pivotal role in these improvements. But what is the science behind these elite running shoes? Can they really make such a big difference? And can they get even better?

Over the last two decades, there has been growing focus on the engineering of sports equipment, including running shoes. But while we are seeing rapid development in this area, these steps are often incremental improvements rather than massive strides of change.

The first ever running shoe appeared about 200 years ago and both materials and design have improved enormously since then. But if you consider the changes on a year-to-year basis, the variances are fractional. They do, however, add up.

A running shoe should protect the foot and the runner from injury. It provides stabilization of the foot and protects skin from damage. It should also limit potentially harmful impact forces as the foot strikes the ground, while returning energy to the runner.

Another claim is that if there is more cushioning in the midsole, then an athlete can run with straighter legs, again making them more efficient.

Running shoes are designed in a way that improves running efficiency. Science suggests that if you can reduce the energy it takes to run, then in theory, you should be able to run faster and for a longer period.

To do this, a number of techniques can be adopted. First, we can reduce the mass of a shoe to make it lighter. This will allow a runner to swing their legs more efficiently. Another claim is that if there is more cushioning in the midsole, then an athlete can run with straighter legs, again making them more efficient.

Adding stiff plates within the [midsole], may also help an athlete to run better by redistributing positive lower limb joint work from the knee to the joint of your toes above the ball of your foot. These stiff plates may also store and return energy to the runner.

In general, when we compress this midsole, and then release it, we want as much energy as possible to be returned. The more energy that is returned, the more efficiently an athlete should be able to run.

It can, of course, be difficult to design tests that systematically explore all these factors, but they are being explored by science.

Every runner is different

Major sporting brands spend a lot of time and resources designing and tuning running shoes, but the biggest challenge they face is the fact that everyone is different.

The design and engineering that goes into a running shoe is quite heavily dependent on the runner, and their requirements. Each person will have his or her own running style and, of course, every foot is unique. There is never going to be a one-size-fits-all in shoe design.

A sprinting shoe would also be entirely different to a marathon shoe, for example. Marathon footwear needs cushioning to reduce injury risk from many impacts over a long distance; while a sprinting shoe could benefit from being stiffer without necessarily requiring as much cushioning.

Similarly, some runners strike the ground right on their heel. These “rear-foot strikers” likely need more cushioning. Others will strike more on their forefoot. They are probably less concerned with cushioning, and could benefit from a more minimalist running shoe, or even running barefoot.

Testing falls into two main areas. The first is engineering testing: testing of the design and materials. This involves testing the shoe in isolation.

For example, you might want to look at the aging of a shoe. This might involve putting an artificial foot in the shoe and compressing it thousands and thousands of times to mimic someone running, and then seeing how the properties change over time.

But you should also explore the interaction of the shoe with the athlete, investigating the effect the footwear has on the runner, their performance and the general physiological state of the individual.

To test this, athletes might be asked to run over force plates while being filmed with a motion capture system, to see how the footwear influences their movement and ground reaction forces. We could also look at the injury risks at this time.

You might also have participants running on treadmills and then monitor their oxygen levels. In these types of experiments you can see how efficient they are at running with different kinds of footwear.

Materials are probably the most crucial thing in footwear science. Many of the latest innovations in running shoes are based around the materials being used.

The shape of a shoe is more or less fixed to the shape of the foot. But you might make the midsole thicker and from a softer, more resilient material, providing a bigger distance for it to compress over, so it can absorb and return more energy.

You can consider a range of things when looking at different materials. You might want to consider using lighter materials, materials that return more energy or materials, which allow the shoe to be more fitted to the foot.

Running shoe midsoles are typically made from moulded materials like EVA foam. The bottom of a shoe needs to be rubbery and provide grip, and often textiles go on top to form the upper.

The future of footwear

I believe the future of running footwear is in sustainability and customization. In future, people could be able to design their own shoes to their preference. I also believe shoes will be designed to better suit the needs of the runner. For example, we might monitor how someone runs in the lab and then design a pair of shoes specifically for them.

One thing is certain, though. We still do not fully understand what makes the best running shoe and science is key. We still have a long race ahead of us.

This article was originally published on The Conversation by Thomas Allen. Read the original article here.

More like this
The paused Johnson & Johnson vaccine just means that science is working
By Melissa Pandika
How long a weed high lasts, according to science
By Melissa Pandika
We don't trust our tap water — and it's a big problem
By Asher Rosinger
Stay up to date