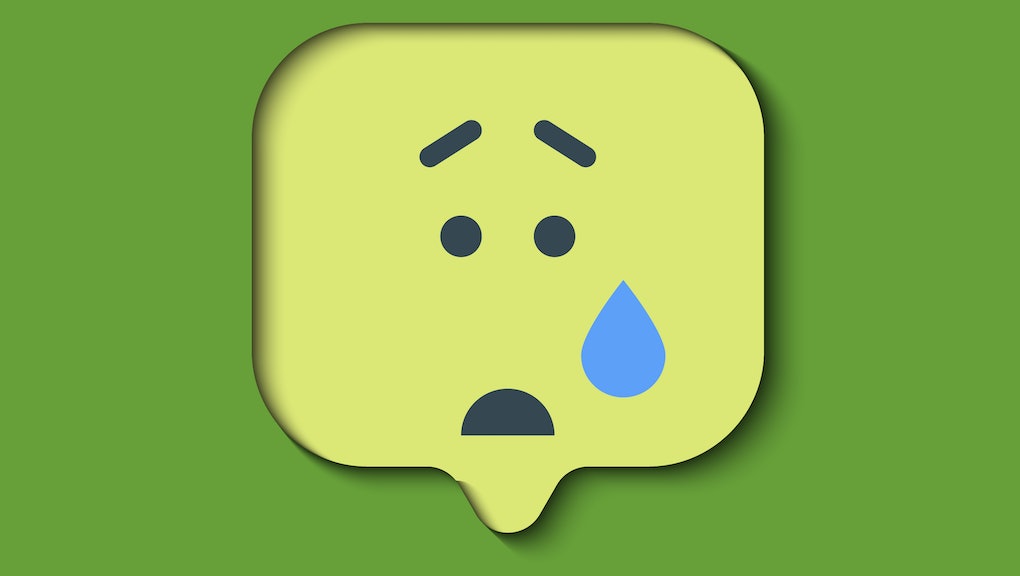 Sad culture normalizes mental illness. But does it also glamorize it?

When I stumbled upon the Cry Baby Instagram account a few months ago, I immediately hit “Follow.” The clothing brand’s posts feature close-ups of gorgeous, teary-eyed celebrities and reassurances that, as its bio states, “it’s ok to cry” — in one photo, a sign posted on a window reads “CRYING SESSION AT MY HOUSE TONIGHT AT 8. PULL UP.” Ariana Grande appears in the stories highlights wearing a sweatshirt embroidered with the brand’s name. It was peak sad culture.

As a self-described softie who gets teary-eyed even over commercials, I felt appreciated and seen. But as I thought of the brand in the context of other social media accounts I had begun following, I wondered: Had sadness become trendy?

Besides clothing brands like Cry Baby and The Sad Society, there are the all-too-relatable depression and anxiety memes from Instagram accounts like Aborted Dreams and Emotional Club. In Mo Welch’s comic series, also on Instagram, the main character, Blair, jokes about loneliness and constantly staying in with her cat. On the So Sad Today Twitter account, Melissa Broder broods, “i’m always staring at people because i’m just like shocked they’re ok w being alive” and “i hate you do you ever think about me?”

As someone who manages an anxiety disorder, I appreciate how this content can normalize mental health issues and build community for people who struggle with them. But I also wonder, how healthy is all of this? Can it further mire people in sadness, or even romanticize depression and other forms of mental illness? The psychologists I spoke to say it all depends on whether you’re creating or consuming the content, and to what extent you’re doing so.

To be fair, society has always aestheticized sadness in some form or another, dating at least as far back as Romeo and Juliet, as i-D points out. Mostly recently, the “Internet Sad Girl” phenomenon birthed a subculture of young people, mostly women, opening up about their sadness online. The Establishment traces its origins to 2011, when Lana del Rey burst onto the scene with her tear-smudged eye makeup and plaintive torch songs.

What sets this incarnation of sad culture apart is its coinciding with the rise of Instagram, Tumblr, and other platforms that have made it easier than ever for users to share their innermost emotions in raw, confessional-style posts, including literally crying into the camera, per The Establishment.

“The Internet gives people a sense of anonymity and protection from face-to-face judgment that sometimes leads them to share parts of themselves they don't normally share,” Erin Vogel, a social psychology researcher at Stanford University, tells Mic. Leora Trub, an associate professor of psychology at Pace University and a practicing clinical psychologist, agrees, adding that being sad online seems to be “an antidote” to the idealized personas typically created online.

On the one hand, this openness can bring connection, support, and validation, Trub says. If you’re feeling down, “it feels kind of good to know there are other people out there that are feeling this way.” Laughing at their sadness or anxiety through a funny meme, or visualizing their struggle as an object, like an anxiety necklace, may help some people work through their pain, as well as dismantle the stigma around mental health issues, she adds.

As with anything taken to an extreme, though, turning only to social media can backfire, and may even worsen depressive symptoms. For starters, focusing excessively on expressing your symptoms and reading about others’ symptoms could hinder your recovery by making it hard to imagine things getting better, Vogel says.

As a clinical psychologist, Trub tries to help people connect to the painful "emotional piece" — including the vulnerability and shame — of their difficult experiences. Reading a stream-of-consciousness Instagram post may give you “the rhetoric of sadness and loneliness… but the emotional piece of that isn’t there,” she says. “The deeper processing that helps people really come to terms with their pain and understand themselves through it — that’s hard for that to happen in that space.” In other words, people may scroll through social media, expecting healing, but it's not going to provide nearly the same journey or process as actual therapy.

What’s more, by consuming this content, you’re “normalizing the rhetoric, but you’re missing the element of how painful it all is,” Trub says, which may glamorize mental illness. Indeed, she’s noticed that many of the undergraduates her doctoral students work with tend to have “a wish for diagnosis, a wish for medication, a sense that that’s what will make them unique and interesting,” she says. “I do think that social media plays a role in that.” Earning or enhancing your identity with diagnosis, as you can imagine, can be pretty problematic on many levels.

This disentangling of verbal or visual expressions of mental illness from the suffering underlying them could lead young people who are struggling to develop a sense of self to view mental illness simply as a way to self-identify. Trub recalls one young woman who “really wanted” a bipolar diagnosis and a prescription for lithium, often used to treat the disorder, probably because she’s received “a lot of validation… that a mental health diagnosis makes you interesting and complicated,” Trub says, “but she has no idea how painful that life actually is.”

Likewise, I worry that social media portrayals of mental illness as quirky or edgy may lead some people to see it as something they could "try on," not unlike a fashion accessory. Having lived with generalized anxiety disorder for most of my life, I wish I could shed my pervasive, persistent anxiety as easily as I could an outfit at the end of the day — and I worry that people who treat it as such may feed the misconception that people who really do have mental health conditions are "faking it" to seek attention, or feel cool or special.

And while poking fun at mental illness helps some people cope, others may see it as trivializing their struggle. For instance, in response to a photo video producer Kelsey Darragh posted of herself wearing a t-shirt that reads “Anxiety Queen” on Instagram, one user commented, “Funny that my anxiety is literally debilitating and makes me wanna die but at least you made a cute shirt from it.” In Trub’s perspective, though, everyone has the right to work through their difficulties in any number of ways, including those that may be trivializing to other people.

Research suggests that people those who create this content are more likely to reap benefits than those who just consume it, according to Trub, most likely because sharing their pain necessarily involves tapping into the emotional piece of whatever tough situation they’re facing and can yield an affirming “Same” or “I felt that” from other users.

“When you take more of a risk [by being vulnerable], the potential of getting what you need is greater,” she says. Trub notes, though, that repeatedly posting sad rants does carry the risk of alienating people; they may rush to offer support initially, but generally aren't equipped to handle that volume or type of information.

Ultimately, whether online sad culture is healthy or unhealthy all comes down to how we use it. Regardless of whether you’re posting or consuming sad content, Trub suggests asking yourself whether doing so is actually making you feel better, and whether you’re also engaging in other activities to fulfill your needs. When it’s so easy to passively scroll through Instagram, a little mindfulness can go a long way.

More like this
What are neopronouns and how do they honor identity?
By Tracey Anne Duncan
Racism and cocktail culture: The whitewashed history of your favorite drinks
By Joseph Lamour
How much sleep you need, depending on your age
By Dana McMakin
Stay up to date