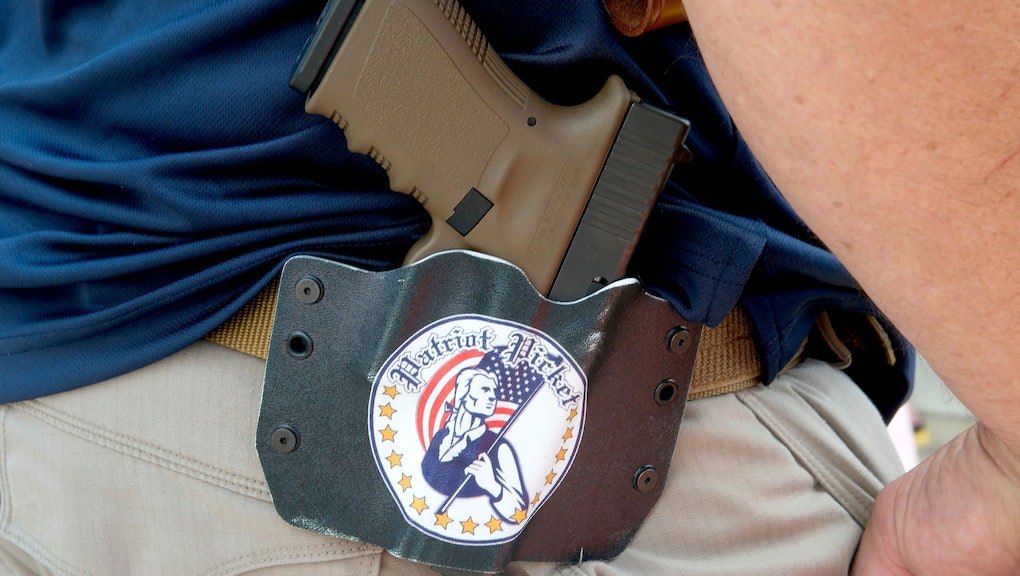 San Francisco labeled the NRA a terrorist Organization. Will that have any effect on gun control?

On July 30, just a few days after a shooting at a garlic festival in Gilroy, California resulted in three deaths and several injuries, a San Francisco official introduced a city resolution declaring the National Rifle Association a domestic terrorist organization. This week, it was approved unanimously by the San Francisco Board of Supervisors, a legislative body within the city government.

“The N.R.A. exists to spread pro-gun propaganda and put weapons in the hands of those who would harm and terrorize us,” Christine Stefani, the Board of Supervisors member who introduced the resolution, said in a statement after its passing. “Nobody has done more to fan the flames of gun violence than the N.R.A.”

On average, there are 36,000 deaths and 100,000 injuries every year in America due to gun violence, the resolution points out, adding that there are over 393 million guns in the US, greater than the number of people in the country. “[Yet our] elected representatives, including the President, have taken an oath swearing to ‘support and defend the Constitution of the United States against all enemies, foreign and domestic,’” the resolution says.

The NRA, meanwhile, according to the resolution, “promotes extremist positions, in defiance of the views of a majority of its membership and the public,” undermining the general welfare of US citizens. Through its advocacy, the NRA “has armed those individuals who would and have committed acts of terrorism.”

The NRA responded by vehemently denying these claims. “This is just another worthless and disgusting ‘sound-bite remedy’ to the violence epidemic gripping our nation,” Amy Hunter, an NRA spokesperson, said in a rebuttal released to the press. “This is a reckless assault on a law-abiding organization, its members, and the freedoms they all stand for. We remain undeterred, guided by our values and belief in those who want to find real solutions to gun violence.”

The resolution has no tangible legal impact, but according to Stefani, per the New York Times, “words matter.” She also said that the action is “a step in fighting the negative impact of the N.R.A.”

Some experts who study how we as a nation react to gun violence are skeptical about this “step.” “Nice sentiment, but seems a bit symbolic and frivolous,” Jeffrey Fagan, a professor at Columbia University who specializes in criminal law, tells Mic. He says the measure is “unlikely [to] reduce the number of guns in circulation, and the lethality of existing weapons,” and that San Francisco “might be better off claiming that the NRA is a criminal enterprise, rather than a terrorist organization.”

If the city was to go that route, Fagan explains, its attorneys could use the federal RICO statute — most prominently featured in high-profile mafia-related racketeering prosecutions — as potential grounds for a case. Fagan also noted that the city has a “long history of litigation against gun manufacturers,” so they could be more prepared than other municipalities for future legal action.

San Francisco could also be opening itself up to a defamation lawsuit initiated by the NRA. “It could probably cost the taxpayers of San Francisco quite a bit of money if the NRA decides to sue them,” says Joseph King, an associate professor at John Jay College in New York City who specializes in terrorism and organized crime. “I think they would have a good case.”

King, who personally would like to see Congress pass stronger gun laws, including an assault rifle ban and the closing of the so-called “gun show loopholes” allowing buyers to sidestep background checks, says the resolution seems to be little more than an advantageous political move on the part of the city’s legislators. “I don’t see any great effect it’s going to have on anybody outside of San Francisco,” he says. “It’s a waste of time and taxpayer funds.”

Still, the resolution “urges” other cities, states, and the federal government to also label the NRA a domestic terrorist group, if only to influence the group’s greater reputation. Other legislative bodies could follow suit.

“This was a bold move by the city of San Francisco to be the first one to take a step in calling out an organization that has spent decades and millions of dollars to support guns,” Rafael Espinal, a member of the New York City Council, who represents parts of Brooklyn that experience gun violence at a greater rate compared to other city neighborhoods, tells Mic. “I, myself, believe this is something New York City should do, since the city that has historically had some of the tightest gun regulations. I think it’s important that we take the next step and call out the NRA for all the work they’ve done to keep dangerous weapons on our streets.”

He adds that taking such steps as the San Francisco resolution shows that there’s support from Americans in the fight against assault weapons and guns in general. “I think that if we have more cities, more states sign on and do the same, it’s going to send a clear message to Congress in Washington that we need stronger gun laws,” Espinal says.

More like this
No matter who wins, the Olympics host city always loses
By Amelia Merrill
Mexico is suing U.S. gun manufacturers over firearms flowing across the border
By Rafi Schwartz
More than 200 GOP lawmakers asked the Supreme Court to overturn Roe v. Wade
By Rafi Schwartz
Stay up to date