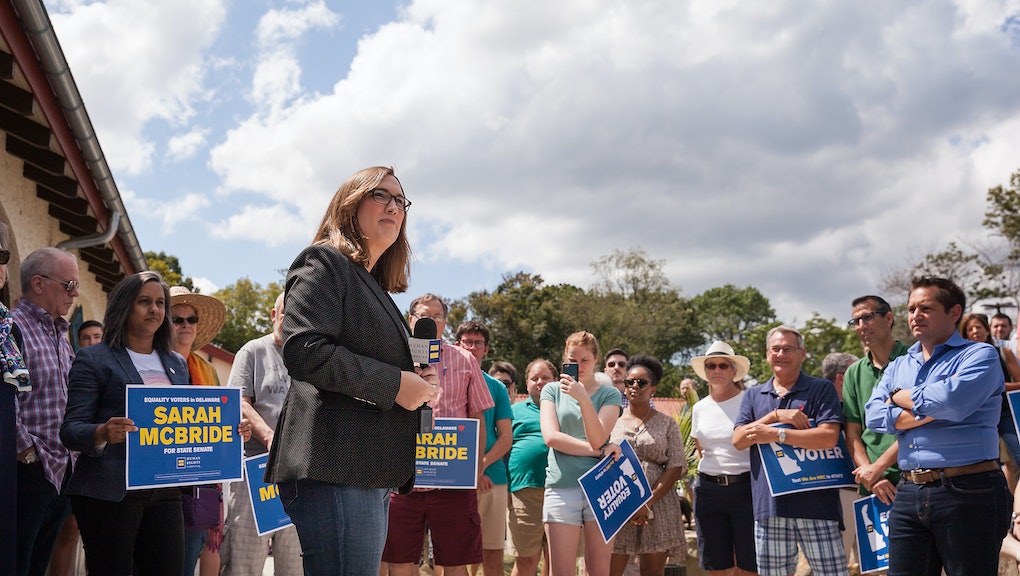 Sarah McBride ran a boundary-breaking campaign, and she's not done yet

“He didn’t skip a beat,” Delaware State Sen.-elect Sarah McBride remembers. She’s referring to President-elect Joe Biden’s late son Beau Biden’s reaction when she publicly came out as transgender in 2012, at the age of 21. McBride, now 30, had worked with Beau on his 2006 and 2010 campaigns for attorney general of Delaware and considered him a “dear friend.”

“What really struck me was the seamlessness with which he used my name and pronouns,” McBride tells Mic. “He was the real deal,” she says, before adding that his leadership in pushing for Delaware’s Gender Identity Nondiscrimination Act was key to its successful passage in 2013.

McBride has made national headlines for her identity for most of her career. She was the first openly transgender person to ever work at the White House when she interned for the Obama administration starting in 2012, and she was the first openly transgender person to ever speak at a major party’s national convention when she spoke at the 2016 Democratic National Convention. When she takes the oath of office this winter, she will be standing on the same floor she stood on almost eight years ago with her family advocating for that nondiscrimination bill. She had been out for less than a year at that time, and though her parents struggled when she first told them she was trans during her junior year of college, they made clear that they loved her and supported her.

“We can’t create solutions for a diverse community if the full diversity of that community is not reflected in the representatives of the people.”

When McBride first came out, her mother asked rhetorically, “What are the chances I’d have a gay son [referring to McBride’s older brother] and a trans child?” McBride’s hope at the time, she says, was that her mother would get to a place to ask that question “not out of self-pity, but out of awe 一 out of awe at the diversity of our family, the strength of our family, and the experiences that that diversity would bring to our family.” McBride says her mother has not only gotten to that point, but passed it; both of her parents are “among the fiercest advocates for equality” that she knows.

Many people are certainly celebrating her historic win; the likes of Chelsea Clinton and Katie Couric have tweeted their congratulations. McBride says the messages she’s received personally have been “overwhelmingly celebratory.” While several races took days to be called, her quick victory Tuesday was one that people could lift up immediately as a victory not just for Democrats, but for representation and inclusion.

While the media has sometimes focused on her trans identity more than her policies, McBride doesn’t resent that. She says she’s not only proud to be trans and to advocate for the trans community, but she also believes that the gender diversity she brings to her state’s legislative body is important. “I strongly believe that diversity in government doesn’t just provide a symbolic message of inclusion — it tangibly impacts the quality of the policies we pass,” McBride tells Mic. “We can’t create solutions for a diverse community if the full diversity of that community is not reflected in the representatives of the people.”

That being said, she’s quick to add that she didn’t run to be a trans state senator, but to represent all of her constituents. The lead issue McBride ran on, in fact, was access to affordable, quality health care, because that’s what voters in her district said was important to them. For McBride, like for so many, the issue is personal: At 24, McBride lost her husband of four days to cancer.

McBride met Andrew “Andy” Cray at the White House in 2012, and they started dating as she began her internship there. Though she was at the White House from 6 or 8 in the morning until 8 or 11 at night, Cray’s job as a policy analyst at the Center for American Progress brought him to the White House for meetings, so they’d be able to see each other during the work day. He was working to expand health care access for trans people, and McBride says Cray’s passion about health care as a fundamental human right informs and motivates her own commitment to that issue to this day.

“We were incredibly lucky,” McBride says of how she and Cray had good health insurance and a flexible employer, “but we were still struggling to keep our heads above water.” McBride knows what it’s like to receive a surprise medical bill and to try to keep up with work while juggling the full-time job of oncological care. Whether it’s cancer or coronavirus, McBride doesn’t want anyone in Delaware to struggle financially because of the health care they need.

McBride’s national profile has grown in the years since Cray’s death in 2014. In 2018, she authored a book with a foreword written by Joe Biden. When McBride announced her campaign in 2019, she says Biden told her he was proud she was running for their home state’s senate. McBride believes Biden’s commitment to trans equality stems in part from his son Beau’s passion for the issue. On Saturday, the president-elect became the first to mention the word “transgender” in a victory speech.

When asked about a tweet that speculated she would be the first trans president, McBride said she has no interest in running for higher office. “This is the district that I was born and raised in,” McBride says, “and I want to give back.”

She adds: “I believe that a life well-lived is a life of service to others and in pursuit of change. This is the place where I feel like I can make the most amount of change.”

More like this
The EACH Act would overturn a "blatantly racist" abortion rule. Will it pass?
By Clare Busch
The real reasons employees aren't rushing back to work
By Noah Berlatsky
How tax prep companies conspired to make filing your taxes so damn hard
By Pat Garofalo
Stay up to date