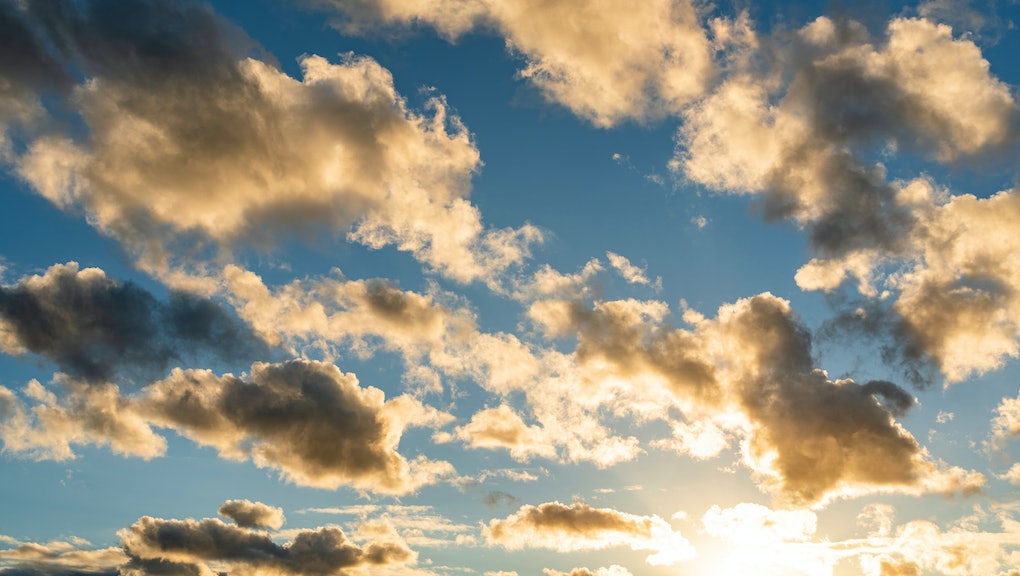 The climate is changing and the planet is warming thanks to human activity. But if humans can change the climate, why can't we just change it for the better? A radical and controversial plan that would artificially modify the Earth's atmosphere to cool the planet is starting to gain traction, according to the New York Times.

The idea hinges on a concept called solar geoengineering or solar climate intervention. Climate change occurs because greenhouse gases trap the Sun's energy in our atmosphere, causing that energy to warm the planet. Solar climate intervention would require reflecting some of that energy back into space. This would help cool the planet or at least keep it from getting hotter.

This type of effect occurs naturally from time to time, like when volcanic eruptions create ash clouds that block out the sun. Scientists have documented temporary cooling effects, which can sometimes last for months, that follow volcanic events. Some believe that a similar effect can be created artificially, which would theoretically buy the planet some time before the effects of climate change are exacerbated and give humans some additional years to cut back on their reliance on carbon-emitting fuel sources like natural gas and coal.

The theory of this type of climate intervention has been around for years, but until recently has been widely panned by most of the scientific community. The concept is controversial. It's not entirely clear how one performs tests and simulations to fully understand how intentionally modifying the atmosphere might affect the planet and what unexpected consequences it might produce. Even if the idea does work, we run the risk of the plan being so successful that it just creates more complacency; why change our behaviors and cut back on carbon emissions when we can just artificially cool the planet any time we want?

And yet, we've done such a miserable job fighting off climate change on our own that scientists have put "build a machine that literally changes the atmosphere" back on the table as a potentially viable solution. SilverLining, a nonprofit organization that funds solutions to fight climate change, announced that it was handing out $3 million in research grants to several universities and research organizations across the country with the goal of studying the effects of solar geoengineering. The research will focus on questions like how high into the atmosphere would aerosols have to be released to what size should the particles be.

The major investment follows $4 million of government-backed research on similar concepts. Last December, Congress approved the National Oceanic and Atmospheric Administration to start researching the feasibility of the technology and to develop techniques to determine if other countries have already started secretly using solar geoengineering technology.

Scientists seem relatively confident that they can successfully replicate the effects of natural climate interventions. “We know with 100 percent certainty that we can cool the planet,” Dr. Douglas MacMartin, a researcher in mechanical and aerospace engineering at Cornell University, told the New York Times. The problem is, they have no idea what happens next. There's no indication of whether this change will affect weather events or the global food supply. Alternatively, we have a pretty good idea of what will happen if we continue to fail to address climate change. By comparison, the unknown almost seems promising.

More like this
The ethics of solar power are more complicated than you think
By Vanessa Taylor
The skyscrapers of the future will be made of wood
By Rima Sabina Aouf
Somehow, a majority of Americans still don't think climate change will affect them
By AJ Dellinger
Stay up to date