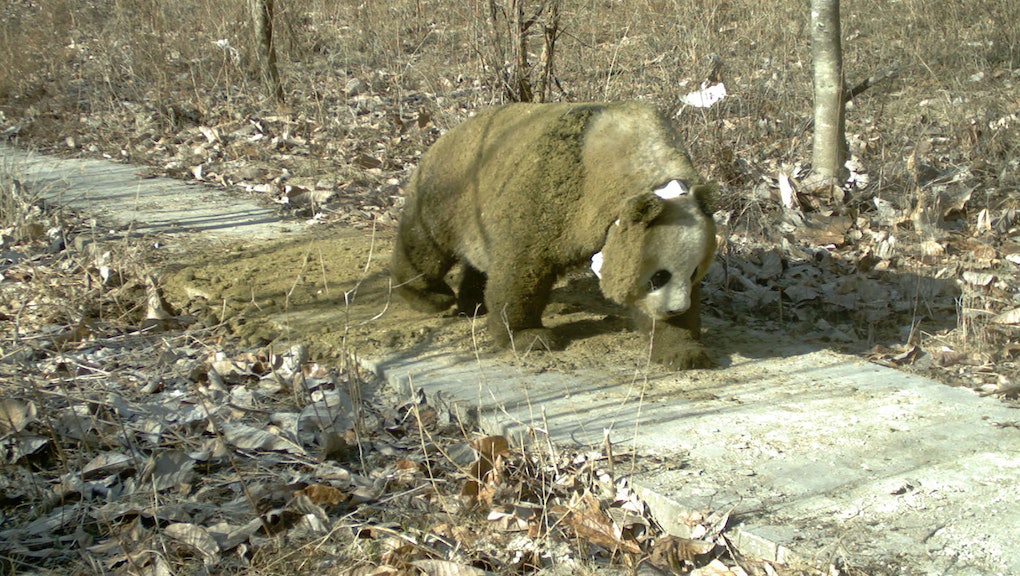 Giant pandas, those adorable mascots of wildlife conversation, like to roll around in horse poop. They can't get enough of the stuff. Just really getting filthy with it, rubbing it all over their bodies when they come across it in the wild. Until recently scientists weren't sure exactly why they did this, but a new study published Monday in the Proceedings of the National Academy of Sciences has finally solved the mystery. According to researchers with the Chinese Academy of Sciences, pandas are likely using the poop to keep themselves warm during the cold winter months.

Making this discovery wasn't as simple as one would imagine. Many species of animals huff feces to identify predators or figure out another creature's mating status. But the subspecies of giant pandas in the Qinling Mountains seemed to specifically seek horse manure. The bears would smell the poop, rub their fat, fluffy cheeks in it, roll their round bodies in it, and use their paws to smear it all over the rest of their bodies. Checking for threats and mates didn't explain this behavior.

So a team of researchers decided to set up cameras to track the pandas from 2016 to 2017. They caught 38 instances of poop bathing. The scientists noted that the pandas only picked manure that was less than 10 days old. And then they realized pandas weren't rolling in poop all the time — only when the temperature dropped below 59 degrees Fahrenheit.

When the scientists examined samples of fresh horse manure for a clue, they realized it contained a bunch of beta-caryophyllene (BCP) and beta-caryophyllene oxide (BCPO). They put their observations together and theorized that perhaps these compounds had something to do with the cold weather.

Due to laws prohibiting experiments on pandas — they're a protected national treasure in China — the research team tested their hypothesis on mice. One group of mice was sprayed with a BCP-BCPO solution. Another group was sprayed with saline. They found that the group with the BCP-BCPO solution tolerated cold temperatures better than the others; they were less hesitant to walk on cold surfaces and didn't need to huddle together for warmth.

This led the scientists to believe the wild Qinling pandas were using fresh horse poop to stay warm. Pandas don't hibernate during the winter like other bears, and their bamboo diet doesn't help them build up fat for insulation. So they might've learned they could bathe in poop to make up for it.

The discovery also doubles as an insight into the pandas' history. Horses aren't an animal pandas would run into in the wild. The authors believe the bears picked up this habit as human trade routes cut through their natural environment.

This could be one instance where human activity might've helped pandas out a bit, if only to stay warm during the winter in the grossest way possible.

This article was originally published on Dec. 9, 2020

More like this
"Brood X," a plague-level cicada infestation, is coming for us this spring
By Rafi Schwartz
Google Earth's new Timelapse feature is a rude awakening for climate skeptics
By AJ Dellinger
What cities will be most affected by climate change?
By Vanessa Taylor
Stay up to date