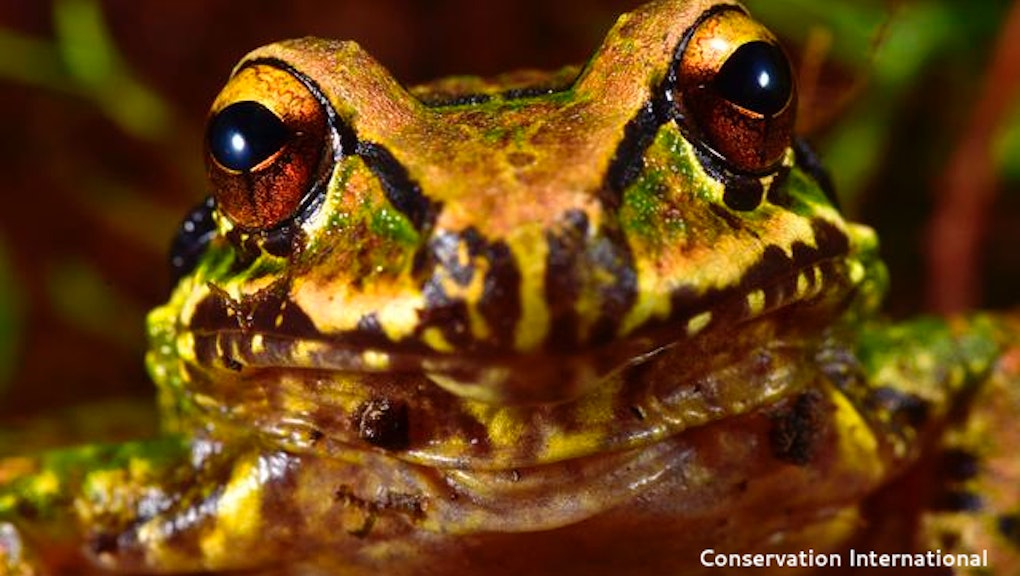 Scientists just discovered a bunch of new animals, including one of the tiniest frogs in the world

There are a lot of headlines out there about familiar animal species being pushed to the brink of extinction thanks to our complete pillaging of the planet and the resultant collapse of biodiversity in once-thriving ecosystems. Much rarer is the announcement of new animals which we didn't even know existed before. Thankfully, today we've got just such news from a team of scientists who traversed the Bolivian Andes to bring us the discovery of 20 new animal and plant species, plus the re-discovery of four animals that were thought to be extinct.

The findings were recorded by Trond Larsen of non-profit environmental group Conservation International and 17 scientists who set out to explore Chawi Grande, an area just outside of Bolivia's capital city, La Paz that is occupied by the native Hualylipaya community. The area is often referred to as Zongo Valley, or the "heart" of the region, where biodiversity thrives throughout steep mountains and largely untouched habitats.

Over the course of a 14-day expedition, the team was able to document dozens of species that were previously unknown to science or believed to have been lost forever. The findings were published on Monday by Conservation International.

Among the new species discovered on the trip through the Bolivian Andes was the lilliputian frog, a tiny creature that measures in at just about 10 millimeters in length, or about half the width of a dime. The little animal is believed to be the smallest amphibian in the entirety of the Andes, and one of the smallest in the world. The lilliputian frogs make their homes in thick layers of moss, making them particularly difficult to find.

Also spotted for the first time ever during the trek was the mountain fer-de-lance, a venomous pit viper noteworthy for the heat-sensing pits on top of its head that can detect prey. According to researchers, only one or two new species of viper is discovered in the Americas every decade, making the discovery of this snake particularly exciting.

Joining the mountain fer-de-lance in becoming known to the scientific world was the Bolivian flag snake, a newly identified slitherer that bears red, yellow and green colors similar to the Bolivian flag. The snake was found deep in the undergrowth of the forest, hanging out around the crest of the mountain at the highest elevation the scientists surveyed.

Scientists were also able to spot four new types of butterfly species deep in the Bolivian Andes. That includes two species of metalmark butterflies, which were spotted feeding on flower nectar in a forest clearing. Two other species, one of the metalmark family and one of the satyr, were caught soaring across the forest canopy.

Of course, it wasn't just new species that scientists set their eyes on while exploring the Zongo Valley. They also spotted four species believed to have gone extinct.

Perhaps the most exciting of those findings was the devil-eyed frog, a creature only barely known to science prior to its rediscovery. According to Conservation International, the amphibian had only been observed once before, more than 20 years ago, and had not been identified since then. As it turns out, the devil-eyed frog has made quite a comfortable home in Bolivia, where scientists said the species is now "relatively abundant" in the cloud forest. The species often hides beneath moss and in the roots of bamboo, making spotting it a difficult proposition.

Joining the devil-eyed frog in returning to the list of known species was a satyr butterfly known by the scientific name of Euptychoides fida. This adorable fluttering flyer was thought to have gone extinct 98 years ago, but has apparently been residing in the Zongo Valley.

These creatures, along with a number of others, provide new insight into the planet and particularly the biodiversity of the region of the Bolivian Andes. It's also worth noting that in addition to supporting these previously undiscovered species and others that were thought to have been pushed past the brink of extinction, the region also supports a local population of humans who survive without disrupting the precious ecological balance of the Zongo Valley. Protecting and conserving these areas is not only beneficial to the plants and animals that call the area home, but also to humans who benefit from the dynamic and lively ecosystem.

More like this
Biden's American Jobs Plan throws $2 trillion at America's crumbling infrastructure
By AJ Dellinger
"Brood X," a plague-level cicada infestation, is coming for us this spring
By Rafi Schwartz
PPE litter is making Earth's plastic pollution problem even worse
By AJ Dellinger
Stay up to date