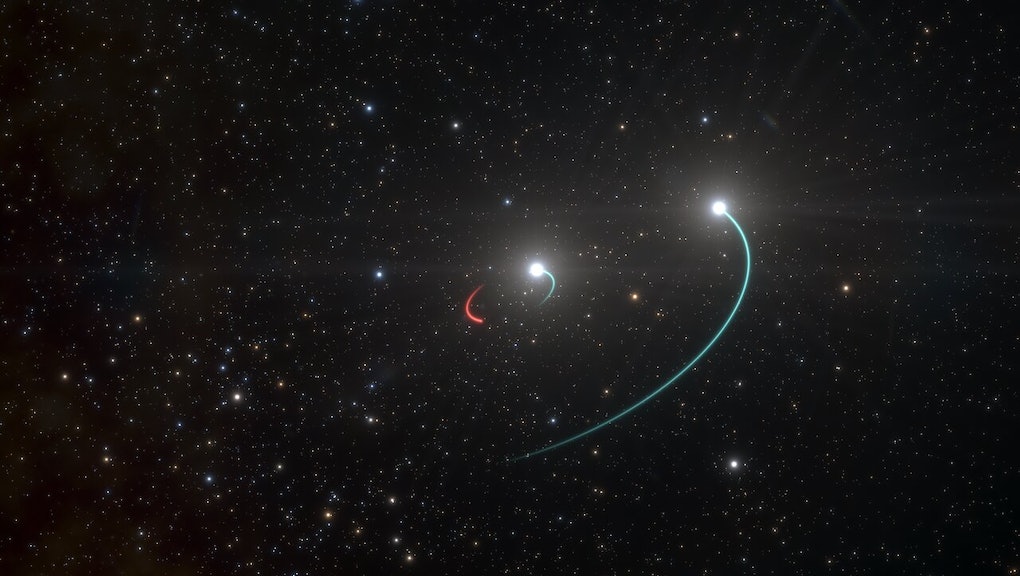 Scientists studying a 'nearby' star system announced on Wednesday they have discovered the closest known black hole to Earth. The star system, called HR 6819, features two orbiting stars that have interested astronomers since the 80s. Those stars were the initial reason researchers were looking at HR 6819, and the discovery of the black hole was a happy accident. The news means black holes could be much more common than most people think and could be all over the Milky Way galaxy.

"If you find one that is very close to you, and you assume you're not special, then they must be out there everywhere," astronomer Thomas Rivinius, the lead author of the study, told National Geographic.

'Close' is relative here. The black hole in HR 6819, which is four times the mass of the sun, is still about 1,011 light-years away from the Earth's solar system, but it's closer than the one that used to hold the title, which is over 3,000 light-years away.

The events that led to finding the black hole began back in 2004, when scientists spent four months using a powerful telescope at the La Silla Observatory in Chile to check out the pair of stars in HR 6819. As the team observed the stars' behavior, they realized they were rotating around something else, some sort of "mysterious third object." It took five years for another scientist to lead a follow-up study to find out what that third object could be. Unfortunately, the lead researcher, Stan Štefl, died in a car accident and no further work was done until last year when Rivinius, Štefl's former colleague, decided to go back to HR 6819. A separate study about a different star system made his team think of similar characteristics they found in HR 6819. So they set out to look at the stars to search for clues that they might be dancing with a black hole.

Finding something that's practically invisible among the darkness of space is tough. "It seems like it's been hiding in plain sight," commented astronomer Kareem El-Badry, who wasn't involved in the study, to National Geographic. "It's a bright enough star [system] that people have been studying it since the 80s, but it seems like it's had some surprises."

The team's discovery has given them hope that they could learn more details about black holes by observing this one due to its proximity.

"Usually when you have a black hole with a star around it, we can't actually see the star go around the black hole," study co-author Marianne Heida told National Geographic. "This one is so close by, we should be able to see the motion ... and that means you could get a much better handle on the black hole's mass, if it all works out."

More like this
For a blessed 11 minutes, Jeff Bezos was not on Earth. Here's what he missed
By AJ Dellinger
These 6 countries are most likely to survive a climate change-caused societal collapse
By AJ Dellinger
For the record, this lake in Patagonia is not supposed to be neon pink
By AJ Dellinger
Stay up to date