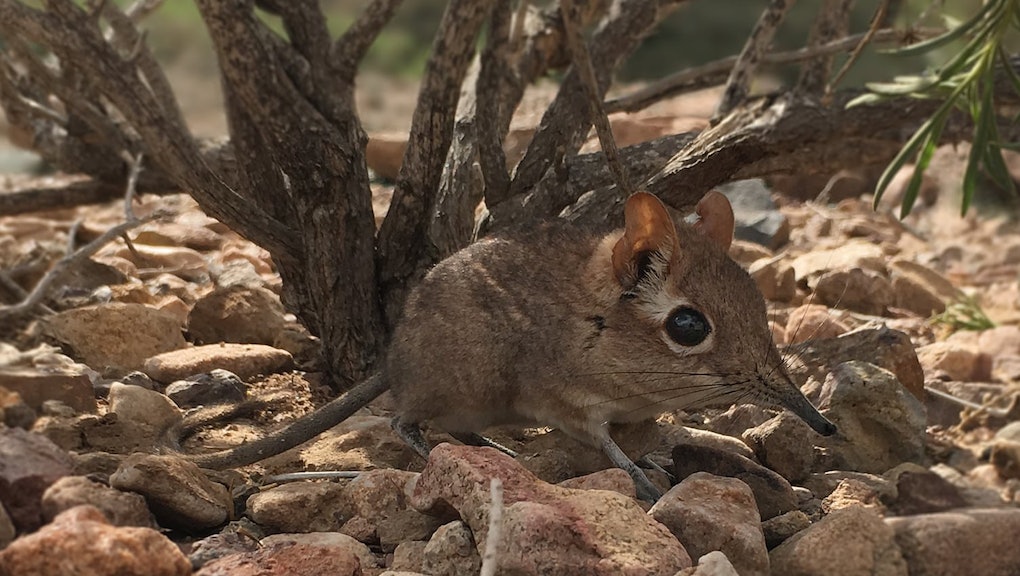 The elephant shrew lives! That's the good news from scientists today as field researchers announced the rediscovery of the Somali sengi, a species that has been missing for 50 years. Thanks to a tip from local conservationists, the rodent-sized animal was finally found, surprisingly safe and sound, in Djibouti, a country neighboring Somalia where it was originally discovered in 1881.

The Somali sengi is a very weird creature with an elongated nose and a characteristic tuft of fur on its tail. They mate for life, use their snouts to eat bugs, and can run at speeds up to 18 miles per hour. The sengi are commonly known as "elephant shrews" because of their small sizes and long noses. However, they're not related to shrews, which has led some scientists to call them the less misleading "sengi" instead.

Despite being the same size as shrews, sengis are more closely related to elephants. The Somali sengi is one of the 20 species of sengis unique to Africa.

Not much else is really known about the Somali sengi because it hasn't been seen since 1968. As conservationists grew concerned about the lack of sightings, the Global Wildlife Conservation group — an organization that strives to protect endangered species — eventually placed the animal on its 25 Most Wanted Lost Species list.

Finally, last year, local Djibouti conservationists told researchers that residents have seen sengis running around. A team traveled to look for them, setting over 1,000 traps baited with peanut butter, oatmeal, and yeast extract. They were able to capture 12 sengi, providing the scientific community with the first live photos, videos, and specimens of the Somali sengi.

"It was amazing," U.S. research scientist Steven Heritage told The Guardian. He was part of the team that went to Djibouti along with the world-renowned elephant shrew expert Galen Rathburn. Rathburn, who studied the sengi for decades, had never seen a live Somali sengi until the expedition. He died shortly after the expedition due to cancer.

"When we opened the first trap and saw the little tuft of hair on the tip of its tail, we just looked at one another and couldn't believe it," Heritage recalled. "A number of small mammal surveys since the 1970s did not find the Somali sengi in Djibouti — it was serendipitous that it happened so quickly for us."

According to the locals, the Somali sengi were commonly seen running around in Djibouti.

"Our interviews with local nomadic and pastoralist people indicated that they see sengis regularly," Houssein Rayaleh, another member of the research team, told Agence France-Presse. But no one had realized these were the 'lost' species of sengi scientists were looking for.

The number of Somali sengi caught was uplifting news to environmentalists, who worried they had gone extinct. The research team concluded that the sengi had somehow learned to spread out their tiny territories to cover different areas for survival. Furthermore, there didn't appear to be many imminent threats to their habitat, which is too arid and dry for humans to develop, so they've been able to thrive in their new homes.

The team sent a recommendation to the International Union for the Conservation of Nature (IUCN) to reclassify the Somali sengi as "Least Concern" on its list of threatened and endangered species.

More like this
Heat waves are killing baby birds by forcing them to flee their nests before they can fly
By AJ Dellinger
14,000 scientists warn of "untold suffering" if we fail to act on climate change
By AJ Dellinger
For the record, this lake in Patagonia is not supposed to be neon pink
By AJ Dellinger
Stay up to date