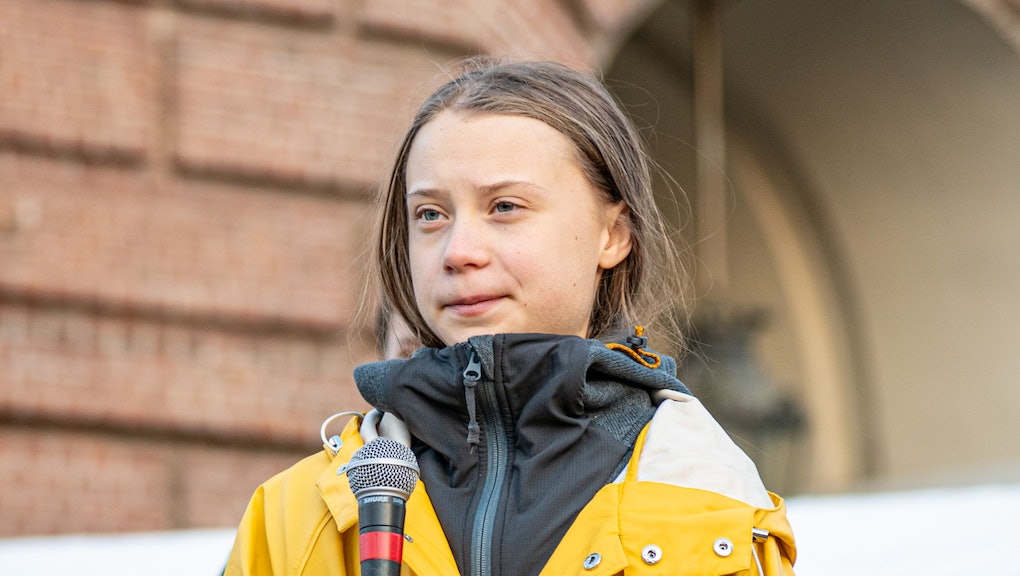 There's a lot to talk about when it comes to youth climate activist Greta Thunberg like her notable speeches calling out politicians or her appointment as Time's person of the year. Instead, radio host and former Trump aide Sebastian Gorka decided to comment on Thunberg's body after a guest brought her up on his show. It would be a disgusting remark even if it was directed at an adult but Gorka deciding to make a crack about a minor made it so much worse.

On Tuesday, Media Matters, a progressive nonprofit organization, posted a clip of Gorka and his guest, Andrew Klavan, an author and political commentator. The clip begins with the two discussing Nick Sandmann, the Covington Catholic student who sued CNN and recently settled.

Klavan goes on to say that Sandmann deserves the settlement and tried bringing up Thunberg as a way to argue that the media favors left-wing teenagers over conservatives. While doing so, he ended up tripping over the pronunciation of her name.

"You know, these are people who will defend Greta Thuns -- whatever her name," Klavan said. "What is her name? Greta Thunberg?"

Unfortunately, this isn't the first time an adult has taken a shot at Thunberg. Once, Breitbart contributor John Nolte tweeted, "I can't tell if Greta needs a spanking or a psychological intervention." President Donald Trump even went after Thunberg by mocking her on Twitter and months later saying she needed to "work on her Anger Management problem."

Given this, it's not surprising to see a former Trump aide make a gross crack about Thunberg. However, it's clear that people aren't going to tolerate grown men making any type of comments about teenage girls. It didn't take long after the clip dropped for social media to explode with responses.

The clip is even worse than that, though. As multiple Twitter users pointed out, Greta Thunberg may be 17 now, but her birthday was on Jan. 3. The transcript between Gorka and Klavan make it clear that the two thought they were referring to a 16-year-old girl.

In the past, Thunberg taken grown men attacking her in stride. She turned the tables on Trump and made his mocking statement her Twitter bio. When Trump accused Thunberg of having an anger management problem, she did it again.

The constant cracks about Thunberg show that her critics are unable to respond to her actual message. It's much easier to call Thunberg "mentally ill" as a way to delegitimize her, like Daily Wire contributor Michael Knowles did, or "brainwashed" ( that one's from the singer Meat Loaf).

This is something that Thunberg herself has called out. In response to Meat Loaf, she tweeted, "It's not about what some people call me. It's not about left or right. It's all about scientific facts. And that we’re not aware of the situation. Unless we start to focus everything on this, our targets will soon be out of reach."