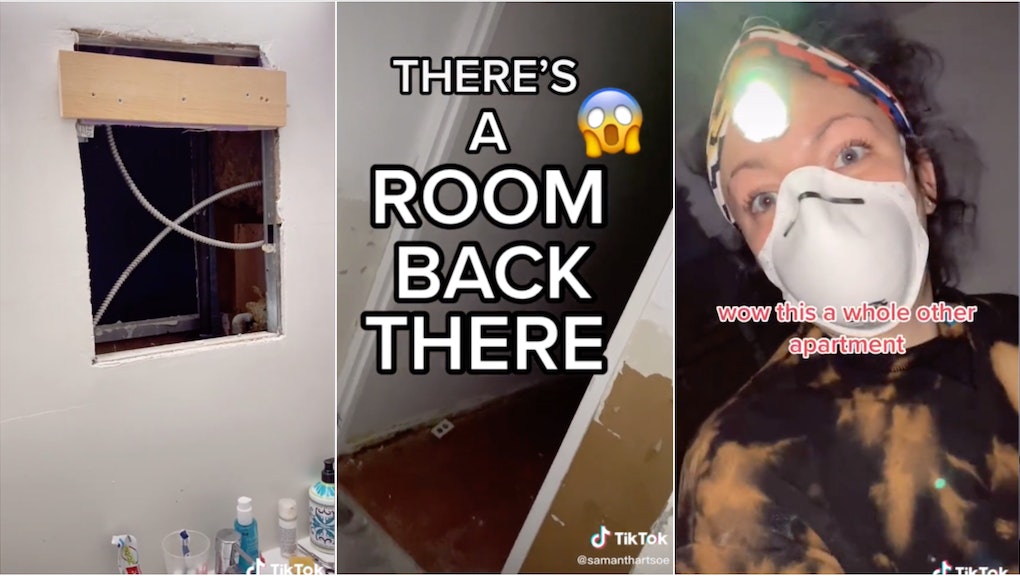 Secret room TikTok is like falling down the creepiest rabbit hole

We’ve all been stuck inside our respective dwellings for a year now. And it’s perhaps symptomatic of this fact that TikToks of people discovering secret rooms in their homes have lately been going viral. The creep-factor of finding a hidden chamber in the place where you live is well-documented. In fact, it’s the premise behind plenty of horror flicks and detective novels. But since TikTok turns people into documentarians of their own lives, we’re now able to vicariously investigate spooky stuff with strangers in real time.

The latest high-suspense saga to capture the internet’s imagination documents one woman’s shocking discovery in her New York City apartment. The four-part mini mystery is worth watching firsthand, because it’s thrilling entertainment. But I’ll break it down for you anyway: in her first TikTok, Samantha Hartsoe complains her apartment is freezing and investigates the source of a draft. She determines cold air is coming from an unlikely source, her bathroom mirror, and takes it off the wall only to discover — shocker! — a gaping hole leading to an entirely separate, decrepit apartment. Naturally, she climbs through to investigate. A friend wonders aloud if there could be someone living in the hidden rooms, à la Parasite. Other viewers have compared it to Candyman, the 1992 horror film about a hook-handed killer who emerges from mirrors. Hartsoe’s initial TikTok about the secret apartment has amassed nearly 8 million views in 24 hours.

Another creepy discovery that thrilled TikTok recently was a secret basement, found by TikTok user @unfortunateexistance, who now regrets skipping a home inspection when she moved in a year ago. She documented the moment she pulled back her carpeting to reveal a rough-hewn trapdoor. “Honey, we have a basement. We have a fucking basement,” she marvels in a February 19 TikTok that’s been viewed over 14 million times. In subsequent videos, she investigates the detritus down there, including a rocking chair, an old pickle jar, and her fusebox (which she’d been unable to locate prior). Honestly, “secret room TikTok” is mostly revealing just how many buildings out there aren’t up to code.

Once you start looking, there are tons of videos just like this. A viral prompt from TikTok user @hardboiledtaryn in December 2020 asked people whether there was a part of their house they never knew existed. Sasha Jones replied with a chilling tale of a secret attic found above the apartment her family lived in for 10 years. When her brother investigated the space, he found signs someone had been living up there: a bed, dresser, sheets, and a pair of shoes. Everything was covered in dust, and a set of footprints led from the bed to the space above Jones’s room and back, with no sign anyone had exited. She said she experienced bouts of sleepwalking and sleep paralysis while living there, which stopped when she moved out. Her series of TikToks about the mysterious attic have been viewed more than 3.5 million times.

Because it’s TikTok, clout chasers have jumped on the trend in the last year, ratcheting up the tension when there's actually nothing to speak of. Searching "#secretroom" or "#hiddenroom" on the app turns up a plethora of strangely placed cabinets and people “investigating” what’s inside them. A few videos made me say, “That’s a laundry chute, my dude.” Other folks have taken to TikTok to show off custom-built secret passageways and hidden rooms — many-a-kid’s fantasy and quite a flex if you’re loaded and feel like living like Kim Kardashian.

When TikToks of secret rooms are the real deal, however, they can be thrilling. Take the exploits of British man Freddy Goodall, who has unearthed all sorts of secrets in his 500-year-old home. In one saga, posted last May, he found a passageway behind a library bookcase that led to a chamber full of old, torn-up books and hypothesized they were leftover from the mansion's time as a boarding school. He's also discovered wine storage and tunnels that once led to servants' quarters. I'd wager his TikToks are more exciting than any show on HGTV.

More like this
The Olympics can't pretend athlete protests aren't happening
By Kara Weisenstein
Can TikTok's new résumé feature really help you find a job?
By Tracey Anne Duncan
A #MeToo’d Ryan Adams made his bed and now seems pretty uncomfortable in it
By Chloe Stillwell
Stay up to date