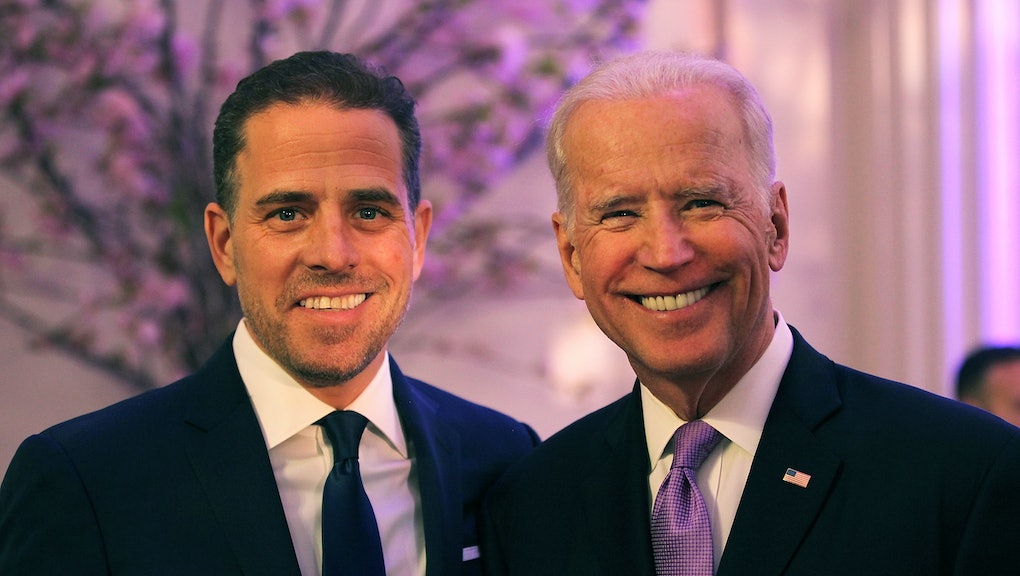 Senate Republicans are advancing their controversial investigation of Hunter Biden

On Wednesday, the Senate Homeland Security and Governmental Affairs Committee voted to issue a subpoena related to its ongoing investigation into Hunter Biden, Joe Biden’s son. In an 8-6 vote along party lines, the committee moved to subpoena Blue Star Strategies, a lobbying firm that provided consulting services to Burisma, a Ukrainian gas company that hired Hunter Biden as a board member. President Trump has encouraged the investigation, and said in March that he plans on using Hunter Biden’s work for Burisma on the campaign trail. “I will bring that up all the time,” he said at the time.

Republicans have alleged that the younger Biden’s role created a conflict of interest for his father, who was at the time involved in combating corruption in Ukraine while serving as vice president in the Obama administration. While Hunter Biden admitted that serving on Burisma’s board showed “poor judgment,” he said that nothing he did there was “improper.” No evidence of any malfeasance by him or his father exists, but Trump’s determination to have the Bidens’ work in Ukraine investigated ultimately led to his impeachment.

The subpoena seeks documents Blue Star Strategies as well as a deposition from Karen Tramontano, its CEO. Tramontano said in a letter to the committee that it has “willingness to cooperate.”When Trump's impeachment trial kicked off, Senate Republicans claimed that Joe Biden tried to remove Viktor Shokin, a Ukrainian prosecutor, in order to keep Shokin from investigating supposed corruption at Burisma. However, Shokin was not, in fact, investigating Burisma when he lost his job, and Shokin’s removal was supported by the international community at the time.

The investigation now seems designed by Senate Republicans to attack and embarrass Biden during his campaign for president. Nancy Pelosi told the Associated Press that the subpoenas were “a clear act of retaliation and political retribution intended to help the president keep his job.”

This latest development echoes a strategy that Republicans have used a lot in recent decades: drum up vague charges against high-profile Democrats, and then draw out those charges in Senate trials that never actually reveal wrongdoing, but do tarnish their subject’s reputation. The extensive investigation into Hillary Clinton’s role in the 2012 attack on a diplomatic compound in Benghazi comes to mind.

At the vote, however, Florida Sen. Rick Scott, another Republican on the committee, said that “we need to get to the truth about the Bidens’ relationship with Burisma. These hearings will provide the Senate with the full picture.”

Biden’s team criticized the panel for focusing on partisan investigations instead of working on coronavirus-related matters. “Sen. Johnson should be working overtime to save American lives — but instead he’s just trying to save the president’s job,” said Biden spokesman Andrew Bates.

Democrats on the committee also pushed back on the subpoena. “At this moment when Americans need us to work together, this extremely partisan investigation is pulling us apart,” said Michigan Sen. Gary Peters.

Clearly, the investigation aligns with Republicans’ previous attempts to smear Joe Biden by linking him to vague allegations of corruption, leading to months of negative headlines for Trump’s opponent during the peak of campaign season. However, the entire project may prove unsuccessful. With tens of millions unemployed and a pandemic still raging through America, how much will people care about an obscure conspiracy theory involving Ukrainian prosecutors and gas companies during the Obama administration? Only time will tell, but the GOP seems to be assuming that voters’ appetite for this stuff is substantial.

More like this
Title IX will once again protect against gender identity discrimination
By Rafi Schwartz
Americans are feeling something weird and unfamiliar: optimism
By AJ Dellinger
In his first address to Congress, Biden took on the country's vices: guns and police brutality
By Rafi Schwartz
Stay up to date