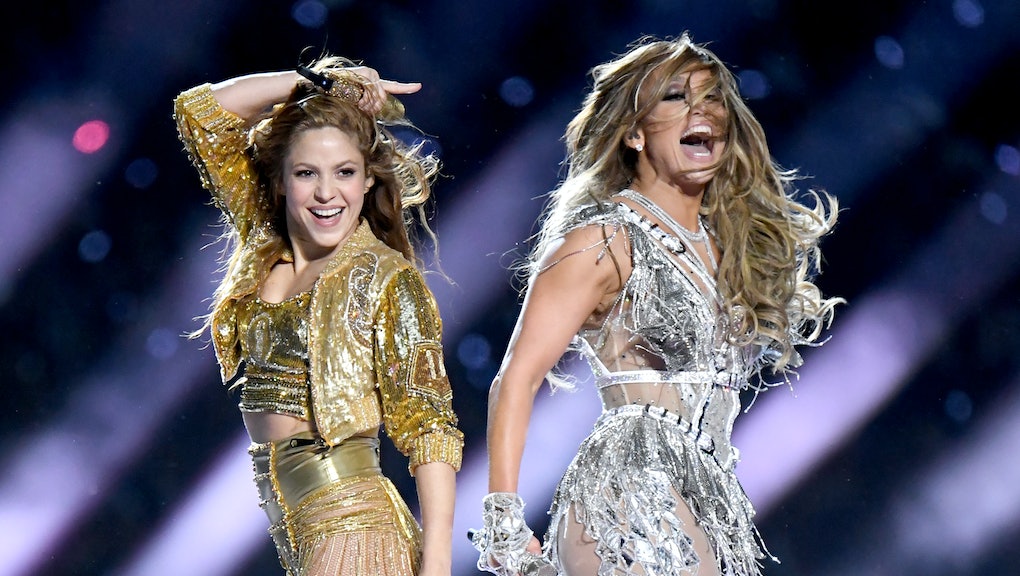 Shakira and J. Lo's halftime performance built on the subtle politics of past halftime shows

Sunday night's game marked the 54th Super Bowl, but it may surprise you to learn that the halftime show, a media event nearly inextricable from the sporting itself, hasn’t been part of the Super Bowl for all that long. The show became a glitzy pop spectacle in the early 1990s, as rival networks competed for eyeballs during the game.

New Kids on the Block were the first major pop act to perform, in late January 1991. Interestingly, the show didn’t air on TV till after the game had already ended — that year, halftime was superseded by ABC News’ coverage of Operation Desert Storm.

Shakira and Jennifer Lopez electrified Miami's Hard Rock stadium at halftime this year. Their glorious co-performance gave me shivers, cleared my skin, did my taxes, et cetera. It also contained a few subtle-yet-powerful political statements. Lopez donned a double-sided Puerto Rican and American flag to sing "Born in the USA" with her 11-year-old daughter, Emme Maribel Muñiz. Before that, she and a dozen other children crawled out of cages, while Lopez sang "Let's Get Loud."

Long before taking the stage on Sunday, Lopez said it was "super important for two Latina women to be headlining the Super Bowl, especially right now in Trump's America." The powerful optics were partly why she signed on when Roc Nation recruited her and Shakira to perform. Jay-Z announced in August 2019 he'd partnered with the NFL to "enhance" its social justice and entertainment efforts, in the wake of the Colin Kaepernick controversy.

Anyhow, last night's show wasn't the first time pop stars have used the Super Bowl as a platform, accidentally or intentionally. Here’s an overview of times musicians have gotten political during halftime:

Michael Jackson’s performance in 1993 codified the Super Bowl halftime show as a major cultural event. The broadcast drew an estimated 133.4 million viewers in the US, setting a record for TV viewership at the time.

Before he revolutionized the way music factors into football’s biggest night, the King of Pop had no idea how big a deal the Super Bowl was. He reportedly suggested changing the name of the game to the “Thriller Bowl.”

Reflecting on his groundbreaking performance years later, Rolling Stone noted the ‘93 Super Bowl was one of the last times Jackson was fully in charge of his image and career. Just months later, he was accused of child molestation — charges that haunt his legacy even today, more than a decade after his death.

Halftime was relatively mellow over the next decade. Tanya Tucker, Diana Ross, and The Blues Brothers all played in the mid-to-late ‘90s; in 2001, halftime producers MTV finagled an all-star lineup featuring NSYNC, Britney Spears, Nelly, Mary J. Blige and Aerosmith. Then the Twin Towers were attacked on 9/11. The NFL chose U2 to play a tribute to those killed in the attacks; as the band played, the victims’ names were all displayed.

Justin Timberlake warned he’d have people naked by the end of his song, but the world wasn’t ready to see Janet Jackson’s bedazzled breast for half a second on live television. “Nipplegate” led to an immediate crackdown on nudity and perceived indecency in broadcasting. MTV was fired from producing the halftime show, “Janet Jackson” became the most Googled search term in the history of the internet, and the incident (and public interest in rewatching video of it) actually helped birth YouTube.

Now with 16 years of hindsight and perspective, a lot of critics have astutely pointed out that Jackson took all the flack for the gaffe, even though the "wardrobe malfunction" was Timberlake's fault. Janet was the artist who was blacklisted and blamed. Meanwhile, Justin's solo career blossomed, and he was eventually welcomed back to the Super Bowl with open arms. In 2018, Timberlake headlined halftime, and the NFL actually let him sing “Rock Your Body” again on live TV... but without Jackson this time.

After “Nipplegate,” there are like six seasons where the NFL places safe bets: classic rockers like Bruce Springsteen, Paul McCartney and The Who headlined the Super Bowl from 2005 to 2010. (This era did bequeath the incredible 2007 Prince performance of “Purple Rain” in the rain, perhaps the best Super Bowl halftime show of all time, however.)

The Black Eyed Peas broke the contemporary pop fast in 2011, but it wasn’t until Beyoncé’s breathtaking performance at the New Orleans Superdome in 2013 that the halftime show got its mojo back. Beyoncé became the then-second-most-watched Super Bowl artist, with 110.8 million people tuning in. When the stadium lost power in the minutes that followed, the whole incident generated more than 299,000 tweets a minute, making it the second-most tweeted moment in the history of Twitter at the time.

Last year’s Super Bowl took place in Atlanta, Georgia, the current hip-hop capital of the world, but the NFL had a hard time finding any black artists willing to perform at halftime, in the wake of the Colin Kaepernick controversy. Gladys Knight was forced to defend singing the National Anthem before the game, and Maroon 5 delivered one of the blandest performances in Super Bowl history. They opened their set with the song “Harder to Breathe,” which if you think about it in the context of police brutality in this country is just… oof.

Last year, Jay-Z’s Roc Nation signed on to produce the halftime show, and for its first venture with the NFL, brought on superstars JLo and Shakira to headline the Super Bowl in Miami, Florida, one of the most Latino cities in the nation. “I think it’s important in this day and age for two Latin women to be standing on that stage,” Lopez told Variety recently. In an age of xenophobia and white supremacy, when Trump is still agitating for his wall on the US border with Mexico, that representation is valuable.

Still, a lot of people feel the NFL glossed over its recent gaffes. “Lopez and Shakira have a crossover appeal — that’s how the NFL uses its halftime show,” Louis Moore, an associate professor of history at Grand Valley State University, told The Undefeated. “But at the same time, the combination of J. Lo, Shakira, and Jay-Z is doing something different. Almost like the NFL is pacifying what’s going on with [Colin] Kaepernick,” he added.