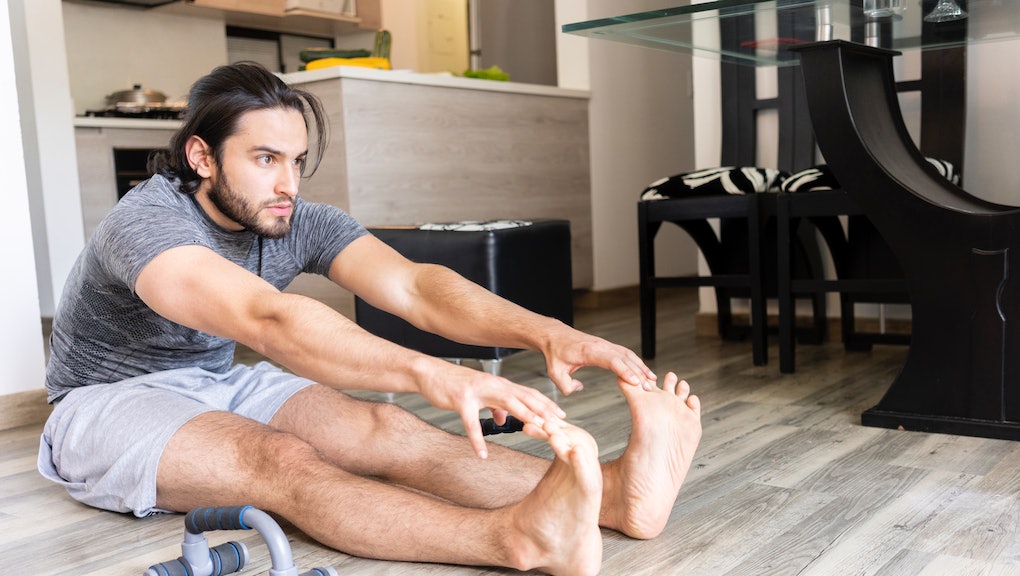 Should you get high before working out?

Sure, you've got a great fitness routine that's doing wonders for you. But have you ever tried working out while high?

I have, though not necessarily on purpose. (I live in California, where purchasing weed is legal with a medical marijuana card.) Usually it's because I took a puff or two before remembering that I meant to run that day. Much to my surprise, however, a little marijuana didn't slow me down. In fact, as with many activities, pot seems to make exercise more enjoyable.

As it turns out, I'm hardly alone in this discovery.

What kind of athletes use marijuana?

Aside from Arnold Schwarzenegger taking some drags off a joint in the documentary Pumping Iron and Olympic swimmer Michael Phelps facing disciplinary action over a notorious bong incident, a number of basketball and baseball players have been said to get high. NFL players have touted weed as a safer alternative to painkillers, and there's evidence it could help protect the brain from traumatic injury.

Runners in particular seem to have a special relationship with weed. Avery Collins, who routinely runs ultramarathons that are hundreds of miles in length, told the Guardian in May that taking marijuana edibles before practice runs "helps me stay in the moment and embrace what's going on right then and there," and that half the runners he meets are "avid cannabis users."

So it appears there's anecdotal evidence marijuana is often no impediment to fitness or athletic achievement — but it's still worth asking if it actively helps.

Marijuana and exercise: The benefits

Believe it or not, the U.S. Anti-Doping Agency lists marijuana and cannabinoids as banned substances because they have "the potential to enhance ... sport performance." Here's what the agency says about the potential boost athletes can get from weed (emphasis ours):

While the effects of marijuana can decrease hand-eye coordination and distort spatial perception, there are other effects that can be performance-enhancing for some athletes and sport disciplines. Cannabis can cause muscle relaxation and reduce pain during post-workout recovery. It can also decrease anxiety and tension, resulting in better sport performance under pressure. In addition, cannabis can increase focus and risk-taking behaviors, allowing athletes to forget bad falls or previous trauma in sport, and push themselves past those fears in competition.

Now there's even a gym in San Francisco devoted to this concept. Power Plant Fitness, co-owned by Jim McAlpine (an entrepreneur and marketing executive) and Ricky Williams (a former NFL player who retired after testing positive for marijuana) promises that members "will be allowed to consume cannabis at the gym before or after working out." It's the culmination of a mission shared by both men, as evidenced by McAlpine's creation of the weed-friendly 420 Games and Williams' advocacy for the mindful combination of cannabis and sport: to challenge the stereotype of the couch-bound stoner.

Used correctly, McAlpine told Outside magazine, "cannabis takes the things you love and lets you love them more. With fitness, that can help get you into the zone, into eye-of-the-tiger mode." He envisions his own line of edibles for this express purpose.

What do other fitness experts make of his passion?

Bill Ross, a personal trainer whose fitness company has been named among Denver's best for 2015 and 2016, sees the appeal.

"I believe that [marijuana] can be effective or destructive based on the person using it, as well as the delivery," he said in an email. "If it is an intense exercise routine it can benefit the body [with an] increased number of cannabinoids," which Ross said can function like natural endorphins, improving your focus and drive.

Marijuana workout effects: The science behind marijuana and exercise

The reason people report better workouts on weed is the body's endocannabinoid system, a network of receptors throughout the brain, nervous system, organs and tissues that regulate everything from pain to appetite to fatigue. It's a complex system, but put simply, it helps to keep all your biological functions in balance — a condition known as homeostasis.

This network responds to both chemicals produced within the body, called endocannabinoids, and the similar cannabinoids found in marijuana. So when research shows, for instance, that the pleasant phenomenon known as "runner's high" is caused in part by a surge of endocannabinoids, it's not surprising that marijuana may mimic that effect. The result, according to that study, is "euphoria, anxiolysis, sedation and analgesia" for a runner — a sense of well-being, the reduction of anxiety or stress, and a dampening of pain.

On top of all that, marijuana use has been linked to a healthier metabolism, and, contrary to what you might assume, enhanced respiratory function. "Low to moderate users actually showed increased lung capacity compared to nonsmokers," according to a study in the Journal of the American Medical Association. Surely that would come in handy while exercising.

The potential drawbacks of exercising on marijuana

So far, this all sounds like great news: In sensible amounts, weed seems to give us a natural boost when we're ready to get active.

"Unfortunately," Ross said, "not everyone has the same reaction, and [some] are not able to focus as well or push through the intense workouts." It seems that, as with many of marijuana's possible effects — whether that's a panic attack or sexual bliss — pot's usefulness in exercise is individual-specific.

It's also dose-dependent — effects may depend on how much you take. This means athletes would no doubt have more success microdosing, or taking just enough cannabis to reap its therapeutic effects, than they would smoking the strongest strains. They may also prefer a product higher in cannabidiol, or CBD, which offers relaxation and pain relief without the psychoactive high you get from weed's tetrahydrocannabinol, or THC.

Even the benefits can have their downside, though. One problem, according to Ross, "is that even though you are able to push the pain threshold higher, there is a risk of the long-term cumulative damage" to your muscles, tendons and joints. Knowing your body's limits can be an important part of getting fit, and by making those limits blurrier, weed can lead us to work ourselves too hard.

Knowing your body's limits can be an important part of getting fit. By making those limits blurrier, weed can lead us to work ourselves too hard.

The science of working out on marijuana is still murky

Only in the coming years, as marijuana is increasingly legalized and studied, will we start to get a clearer picture of what incorporating weed into regular exercise does to the body. For now, we're heavily reliant on anecdotal evidence, and there's no prescribed way to make weed work for your routine.

That said, the next time you're torn between toking up and getting a quick pump in, just know it doesn't have to be an either/or decision.

This article was originally published on March 20, 2017

More like this
How long a weed high lasts, according to science
By Melissa Pandika
Want to study cannabis chemistry? This Michigan university is now offering a scholarship
By Melissa Pandika
COVID-19 vaccine drug interactions: Is there anything I should avoid?
By Joseph Lamour
Stay up to date