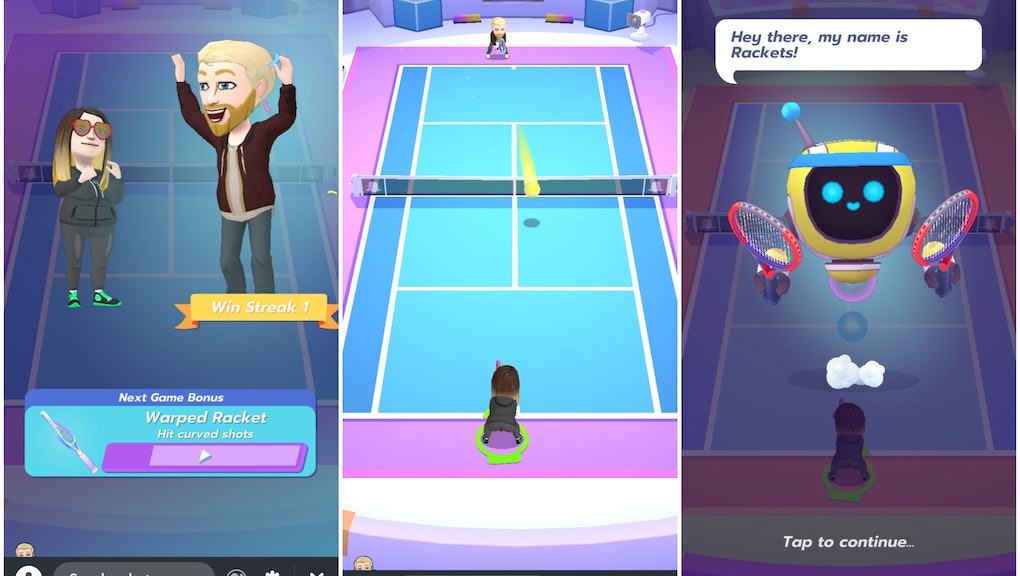 Snapchat's gaming platform Snap Games is host to a few fun-filled mini games that you can invite your friends to play on the go. One of the first titles for the platform, Tiny Royale, proved it was just as formidable of a diversion as any "bigger" console release, and could easily capture your attention while being played right from within Snapchat. Unfortunately, the same cannot be said of Snapchat's new Bitmoji Tennis game, which is colorful but ultimately hollow.

Bitmoji Tennis is a sprightly and friendly looking endeavor that somehow muddies the often universally understood game of tennis (which one of the first video games of all time, Pong, worked to adapt). It's cute, but it ultimately falls flat when compared to the previous Snap Games offering. In fact, compared to most mobile tennis games, it simply can't measure up.

In case you haven't heard, Snap Games are titles that can be played from within your Snapchat client, so setup is extremely quick and easy. You can open a conversation with a friend, then look for the rocket ship icon to the right of your text box. From there, you can select a game to play from a list that looks like it's continuing to grow. While keeping up with your conversation, you can jump into a game with a partner and play together.

Bitmoji Tennis is an extremely simplistic game of tennis — until it's not. Instead of using onscreen controls to give you free roam all over the court, Snap Games opted to limit your mobility. You can only tap to serve the ball and run left or right. Your Bitmoji avatar will swing their racket when you get close to the ball automatically, taking away one of the most addictive parts of tennis games: that satisfying "thwack" of a well-timed hit. From there, you volley back and forth just like any other "traditional" tennis game. The first player to five points wins.

I understand that simplicity is key here, and making the game accessible to all by keeping the controls automated is great in theory. I can even get behind the auto-swing mechanics. But what truly wrecks the experience is the fact that you need to tilt your device to aim your shot. This doesn't work for a few reasons. On my iPhone X, while my accelerometer is accurate, for some reason I need to make more exaggerated movements to curve the ball I'm hitting in a direction that's feasible.

This means I have to move the phone away from my field of view, so I can't see where I'm aiming very well. You can tap the screen to move your player, but you also have to tilt your phone to aim, which is difficult to do simultaneously. In short, it's an awkward experience. Shoehorning quintessentially "mobile" controls like tilting to aim isn't a great idea, and it's not great on the accessibility side of things, either.

Since this is a free game inside of Snapchat, you'll be privy to a few advertisements here and there — and if you sit through them between sets, you'll be given the opportunity to upgrade your tennis racket. That'll give you an edge over the next opponent you manage to play a round of tennis with, but you still have to watch an ad — that's the biggest downside of the entire thing.

There are a few other niceties in-game as well. You can track your stats via the main menu to see how many times you've won against your friends, your best streak, longest rally counts, and more. These are all quite rudimentary stats, however, that you'd expect from most tennis titles.

If you don't have any friends currently around to play with, however, you can't really play the game. True, the entire point of the game is to recruit Snapchat friends to enjoy it with you, but a game platform like this should have a way for you to play solo if you prefer. True, you can hit up the training bot to try and practice your serves, but it's nothing like playing with real, full-fledged AI. It's a shame there's not more for single players to mess around with for when, perhaps, their friends are asleep.

I like the idea of Bitmoji Tennis. It's cute, it's fun, and it has interesting ideas since it's part of Snapchat. But the execution simply doesn't work in a way that makes sense for tennis. The key to making these games more accessible is making sure the current control setup more closely mirrors other games on mobile devices – i.e., no tilting. Here's hoping if Snap Games is going to continue to implement motion controls in its future titles, it's not done in such a frustrating way. The platform has plenty of potential, so it's time to put it to work.