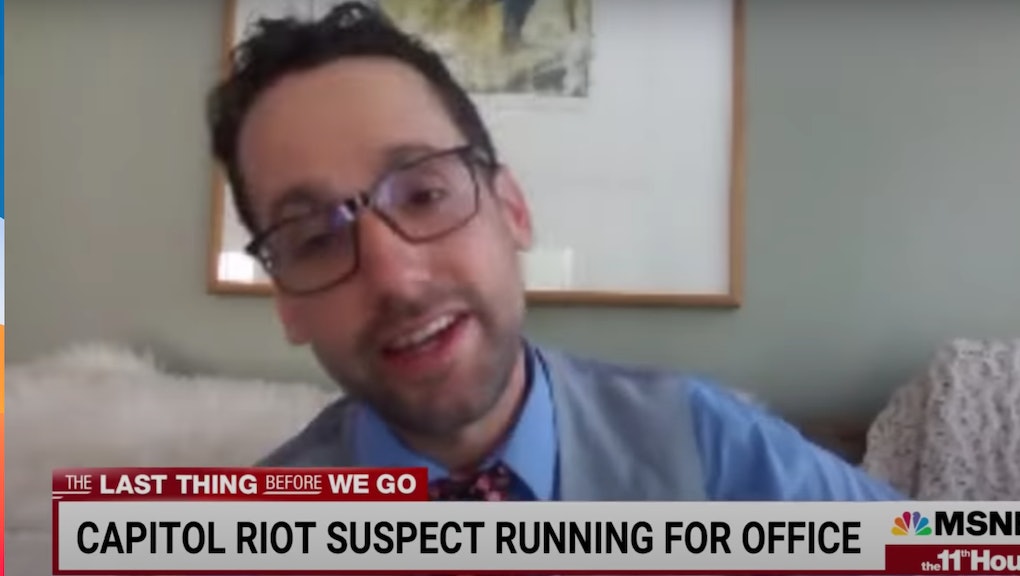 You probably don't know the name Jason Riddle, but you might recognize his face: He's the guy who famously stole a bottle of wine from a Capitol Hill office and chugged it in the middle of the Jan. 6 insurrection, earning himself a small little spot in American history and a nice fat federal arrest record for his troubles.

You might say Riddle is a self-motivated go-getter. A real American entrepreneur. A man with a dream in his heart and a hustle in his ... whatever part of the body hustle lives in. After all, this is someone who used his brief time trying to overthrow the U.S. government to earn an extra $40 by selling stolen Senate documents to some random loiterer outside the Capitol building. And now Riddle has chosen to parlay his 15 minutes of fame into a run for office. The only problem is: He's not quite sure which office he's running for.

Speaking with NBC10 Boston reporter Katherine Underwood, Riddle announced his candidacy to replace five-term New Hampshire Democratic Rep. Annie Kuster in the 2022 midterm elections, reasoning that "any attention is good attention, so I think it will help me." What wasn't helping him, however, is the fact that he had no idea what Kuster did, or even where she worked.

"I thought Anne was a state representative?" Riddle admitted to Underwood, who then patiently walked her interviewee through the differences between federal and local elections.

"A state rep is in the statehouse in Concord," Underwood explained, referencing the New Hampshire capital

"Yeah, that's what Anne is!" Riddle proclaimed, before accepting Underwood's insistence that "no, no no, she's in Washington."

"Oh," he said, finally realizing that he'd just made a complete goober out of himself on a nightly news broadcast. "Well I guess I've gotta run against that then."

I guess so, dude! Only, it turns out Riddle is apparently barred from being in Washington while his federal case is pending, which might complicate his claim that participating in the insurrection "tells [voters] I show up."

But hey, he seems like a smart guy. I'm sure he'll figure something out.