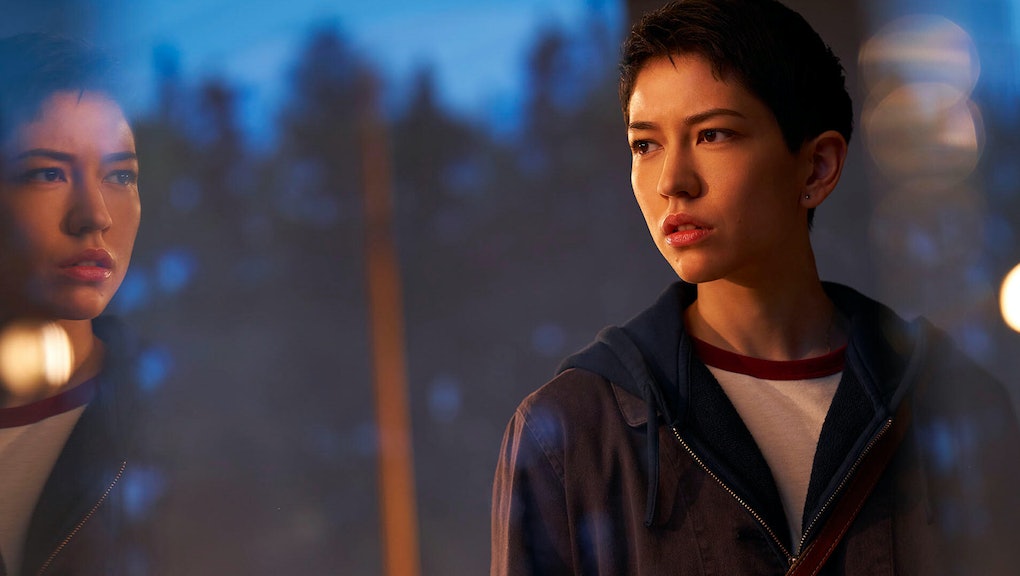 Sonoya Mizuno, star of 'Devs,' is poised to conquer the multiverse

In FX's new Hulu exclusive series Devs, the actress Sonoya Mizuno plays Lily Chan, a brilliant and determined software engineer who becomes embroiled in the eerie machinations of an ominous tech company determined to discover mysteries about the universe. As the show's central character, Mizuno — whose previous roles include Ex Machina and Crazy Rich Asians — offers a portrayal of a dynamic hero that's unfortunately an outlier for female characters in many sci-fi dramas. We watch as she unravels an increasingly complex web of mysteries, all surrounding quantum physics and the question of whether or not fate is real.

The way things are going these days, questions about fate seem particularly appealing. Devs arrives as most the world faces lockdown orders to stop the spread of coronavirus, which continues to wreak havoc around the globe.

When I speak to Mizuno over the phone, the 34-year-old actress is in Japan with all of her siblings (“I'm one of six and most of us don't live in Tokyo”) who had gathered to be near their father, who was ill. He passed a few weeks back, and then the coronavirus pandemic was declared a few days later. So the family has been in Japan, mourning together, ever since.

“To have [the pandemic] as well as what we have going on is, yeah, it's a lot,” she conceded. “But we're not alone, clearly.”

Mizuno stars opposite Nick Offerman (Parks and Recreation) in Alex Garland’s (Annihilation, Ex Machina) technological thriller about a quantum computing company with a super-secret division working on a machine that could alter the universe. Offerman plays Forest, the enigmatic, melancholic founder of Amaya, a fictional tech monolith. Mizuno’s Lily is a software engineer working in the company’s encryption division. She’s becomes involved in the corporation’s shadier dealings when her boyfriend, Sergei, who works for Amaya’s AI team, winds up dead. From the looks of things, he self-immolated at the foot of a gigantic, ominous statue of Forest’s dead daughter, who was also named Amaya. And that’s just episode one.

Mizuno says she “loved” getting into Lily’s skin. “It was really refreshing to play a woman like that. It was really liberating to be able to go for it, as that person, and have short hair and not be wearing makeup and not be hyper-sexualized,” she said. “At some point you have to think, 'Well, fuck it.' If I'm not liked, I'm not liked. But I'm gonna be this person as fully as I can.”

At some point you have to think, 'Well, fuck it.' If I'm not liked, I'm not liked. But I'm gonna be this person as fully as I can.”

Devs deals in some pretty high-minded concepts. Like most of Garland’s film work, it’s rooted in technological and scientific reality, just extrapolated for drama. Quantum computers, like the one that powers the mysterious project at Amaya, do exist; Garland, Mizuno and the Devs visual effects supervisor toured Google’s quantum computing lab in Santa Barbara as research for the shoot. One of the core mysteries of the show deals with the many-worlds interpretation of quantum mechanics — think Sliding Doors, where everything that happens in “reality” also branches into infinite alternate realities contained within parallel universes.

Garland gave salon-style science lectures to his cast during rehearsals, on the basics of quantum physics and philosophies on human morality. “Particularly when we started, at the beginning of the process, he would talk us through the scientific side of things so we had an idea of what was going on,” Mizuno affirmed. “He understands the science of all of it so well. It's not like he's making it up as he goes along. And he has support from a lot of scientists and people in the tech industry who are working with quantum computers and stuff like that.”

As the series unfolds — new episodes arrive every Thursday — the many-worlds theory raises a number of emotional concerns. One scene from episode five illustrates the many possible permutations of heartbreak and love in the universe, as well as the split-second nature of traumatic events. It's sci-fi that lingers in your mind after you're done watching.

In the end, does Mizuno believe in all this stuff?

“All of the people who work [in Google’s quantum computing lab] believe in the many-worlds theory, because they literally couldn't do their job if they didn't. I guess my feeling is that I definitely don't write it off,” she said.