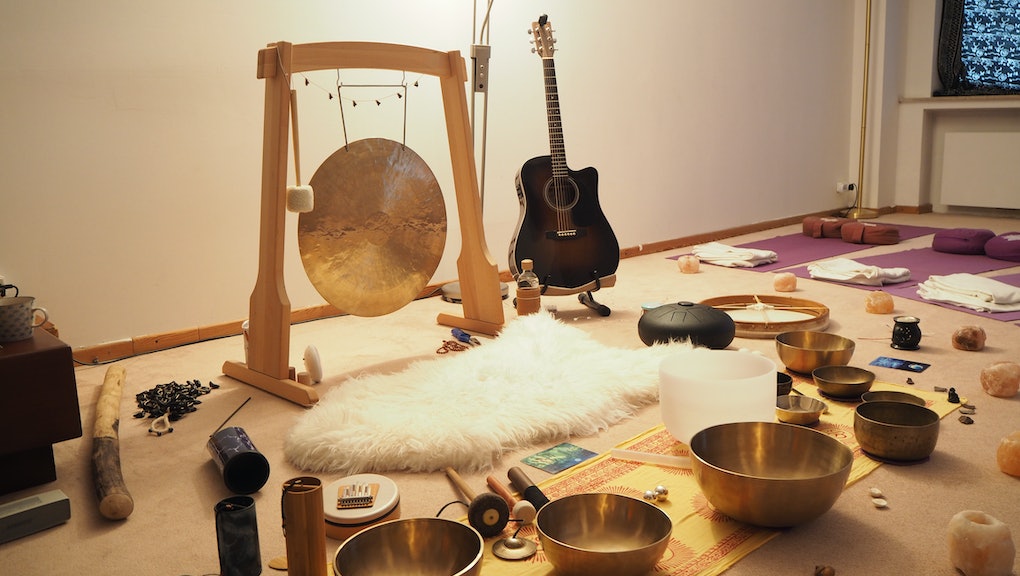 Like some 40 million other Americans, or about 18% of the US population, I live with an anxiety disorder — generalized anxiety disorder, to be exact, characterized by excessive, persistent anxiety or worry, which can fray relationships, as well as work performance. I take anti-anxiety medication, which helps dampen the background hum of anxiety, at least enough to make it easier to employ the coping strategies I’ve learned in therapy. But since I know my anxiety will never completely vanish, I’m always game to experiment with different ways of managing it. Last weekend, I looked into whether sound healing could help with my anxiety.

Sound healing may seem like a Goop-y wellness trend, but people have turned to sound to help them feel better for millennia. Tibetan monks have used singing bowls for meditation and relaxation, while across religious traditions, chanting is believed to aid in mental and physical healing. Now, there’s even scientific evidence for the healing properties of sound, although some approaches require more rigorous studies. Some studies suggest that music therapy may help with anxiety in certain medical settings, such as childbirth and prior to surgery. In a small 2018 study, music therapy lowered stress and anxiety in people with Alzheimer’s disease.

Sound healing encompasses a broad umbrella of approaches, such as singing bowl therapy, guided meditation, and music therapy, per Healthline. I signed up for an event that seemed falls under music therapy, led by producer and multi-instrumentalist Fred Clarke Alvarez. According to his website, Alvarez lived for years in the Andes and the Amazon, and his sound healing, which employs pre-Hispanic Andean instruments, is rooted in Peruvian shamanism.

When I first got the ticket, I balked at the idea of lying still for what would be two whole hours. “I can’t relax for two whole hours,” I texted my sisters. “Maybe you need two-hour healing,” one of them replied. It was slight shade with the best of intentions, so I went with it.

“Are you trying to be a crunchy San Francisco stereotype, though?” I asked myself as I stepped into the venue, a room in an artist residency space in Oakland. A table was set up with snacks and cold genmaicha, and the hardwood floor was strewn with pillows and candles. Flutes, drums, and other instruments rested atop a patterned blanket in the center of the room. Alvarez told one of the attendees about a dream he had about a mutual acquaintance of theirs. “We were talking about really cosmic stuff,” he said. I fought to shush the judgmental voices in my head.

The hosts dimmed the lights, and we all gathered in a circle around Alvarez’s instruments. I sat cross-legged on a pillow as I listened to Alvarez describe his path to sound healing, and its importance in this “time of transition.” Then I sprawled out on my yoga mat and closed my eyes.

Alvarez paced around the circle as he played his instruments, sometimes two at a time, pausing at each person. He began with an instrument that sounded like a didgeridoo; its low, sonorous drone sank into my body, making me pleasantly drowsy. I wish he could have played it a bit longer.

Some sound combinations were like instrumental ASMR — trickling water or rattling shells, paired with a flute or lute-like instrument. Some instruments were particularly evocative, reminiscent of a bird rustling its feathers or a high-pitched falcon cry. I was annoyed with myself for letting images of parrots and rainforests crowd my mind, when I was supposed to be emptying it (even though I’m well aware that “clearing your mind” isn’t a thing).

Then I got annoyed by how often I kept shifting position. I wanted to feel comfortable — but not so comfortable that I fell asleep and would have nothing to write about the experience. Lying on a hardwood floor, though, even with a yoga mat, hurt my lower back. The chorus of snoring that erupted from two of the attendees irritated me even more, rupturing the tranquil, spiritual state of mind I was already struggling to maintain.

Sound healing reminded me of how harsh I am on myself, and that when I stop the self-deprecation and let go of expectations of what my thought patterns “should” look like, I can finally chill.

About an hour in, I decided to get the relaxation I paid for, even if it meant falling asleep. I rolled over on my side and let myself imagine gurgling creeks or whatever else, even if that made my mind more likely to wander toward looming deadlines, or the Japanese fried chicken spot my partner and I planned to hit up later that night. I dozed off — five or six times. During the last half hour or so, I floated in a woozy, half-asleep state, misty rainforest scenes blurring into memories of the work week. Toward the end of the session, I awoke to the musty fragrance of some herb or incense burning. I sat up and listened as Alvarez and other attendees sent up prayers and intentions.

Sound healing reminded me of how harsh I am on myself, and that when I stop the self-deprecation and let go of expectations of what my thought patterns “should” look like, I can finally chill. Now I’m glad the session lasted two hours, because I needed time to reach that point. I’m not sure if I’d sign up for another sound healing session, but if I do, I’d remember to be patient with myself; no one is timing how long it takes me to relax.

After the session, I joined my partner at the Japanese fried chicken joint, still in a somnolent haze. But I was skeptical; was my haze because of the sound healing, or the fact that it was already pretty late and I’d had a full day? I’m still not sure. I can tell you this, though: I normally awaken at least once every night (because, anxiety) — but that night, I slept for seven hours straight, and I even took a two-hour nap the next afternoon.

More like this
We don't trust our tap water — and it's a big problem
By Asher Rosinger
Empty middle seats cut coronavirus risk drastically, according to new study
By Tracey Anne Duncan
Having a bad trip? This hotline can help you find your chill
By Melissa Pandika
Stay up to date