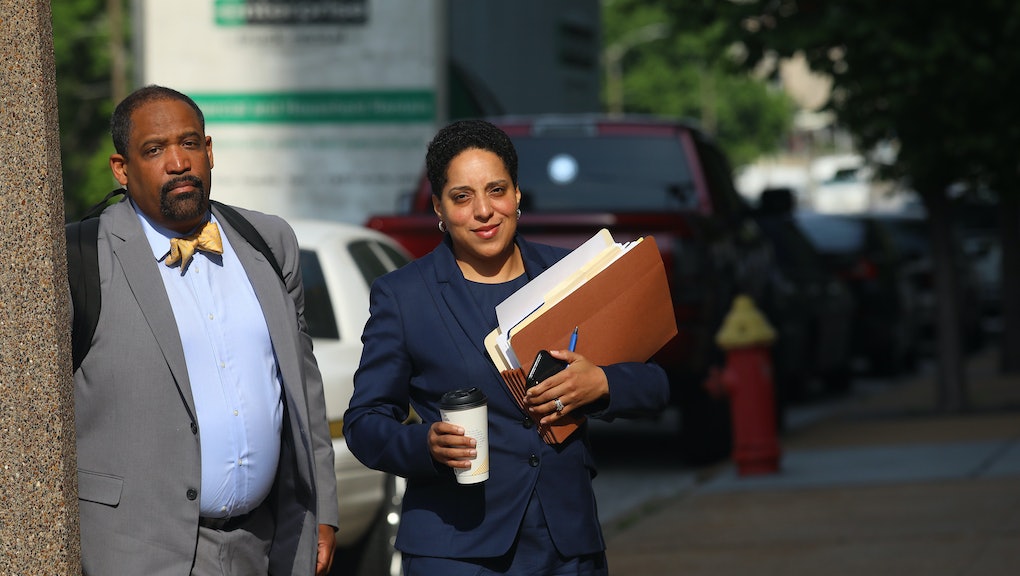 St. Louis Circuit Attorney Kim Gardner is suing her own city, alleging that “entrenched interests” motivated by racial bias have blocked her from doing her job. The Associated Press reports Gardner filed court papers Monday, and the city of St. Louis and the St. Louis Police Officers Association are among the defendants listed in the suit. Gardner claims her civil rights were violated and counterintuitively invoked the Ku Klux Klan Act, a law that was passed in 1871 to address racially motivated violence committed by the Klan and other vigilante groups.

“The Ku Klux Klan Act was adopted to address precisely this scenario: a racially-motivated conspiracy to deny the civil rights of racial minorities by obstructing a government official’s efforts to ensure equal justice under law for all,” the lawsuit reads. “The stakes are high. This case cries out for federal enforcement.”

According to NPR, the conflict bubbled over when former Gov. Eric Greitens (R) got in legal trouble for allegedly blackmailing his mistress. He reportedly took compromising photos of her and used them to deter her from speaking out about their affair; Greitens is married. Gardner hired William Tisaby, a third-party investigator and former FBI agent, to look into the matter. Tisaby’s findings led to an invasion of privacy charge against Greitens, though it was later dropped after Tisaby was accused of lying during a deposition. Greitens resigned in 2018.

Gardner also claims the police union “has gone out of its way to support white officers accused of perpetrating acts of violence and excessive force against African American citizens.”

Special prosecutor Gerard Carmody indicted Tisaby for perjury. The lawsuit states Gardner was critical of this development because of Carmody’s friendship with one of Greitens’s attorneys, but her concerns were ignored. Carmody also publicly supported Gardner’s opponent during the 2016 election, per The Washington Post. Carmody is listed as a defendant in Gardner's lawsuit, along with his son and daughter, who helped him with the Tisaby investigation.

Gardner also claims the police union “has gone out of its way to support white officers accused of perpetrating acts of violence and excessive force against African American citizens.” The lawsuit states that Jeff Roorda, the Police Officers Association's business manager, openly supported Darren Wilson, the officer who shot and killed Mike Brown in Ferguson in 2014. It also mentions a 2017 incident where four police officers attacked an undercover Black cop who was working a demonstration that followed the acquittal of a white officer who killed a Black motorist.

The documents additionally recall the firing of two police officers who were accused of making racist comments on Facebook. One post insulted a Black police officer who took a picture with activists. He was called “Captain ‘Hug a Thug’” and “a disgrace to the uniform.” Another post defended the display of confederate flags. “If the Confederate flag is racist, then so is Black History Month,” it read.

Gardner asserts her opponents’ goal was to “to thwart and impede her efforts to establish equal treatment under law for all St. Louis citizens at every turn; to remove her from the position to which she was duly elected — by any means necessary — and perhaps to show her successor what happens to circuit attorneys who dare to stand up for the equal rights of racial minorities in St. Louis.”

Gardner’s lawsuit is being funded by Mothers Against Police Brutality. She believes it is the first of its kind and acts on behalf of the citizens of St. Louis. “This is about the will of the people being silenced by a concerted effort to stop reform in the city of St. Louis, and this has to be addressed,” Gardner explained to AP.

She continued: “This is saying, 'No more are we going to let the powerful few who want to hold onto the status quo prevent an elected prosecutor from doing her job.”

More like this
New York has set aside a massive, first-of-its-kind fund for undocumented workers
By Rafi Schwartz
Georgia's voter suppression law is bad, Coca-Cola and Delta have finally decided
By Rafi Schwartz
With this new bill, North Carolina is again at the forefront of the GOP's anti-trans push
By Rafi Schwartz
Stay up to date