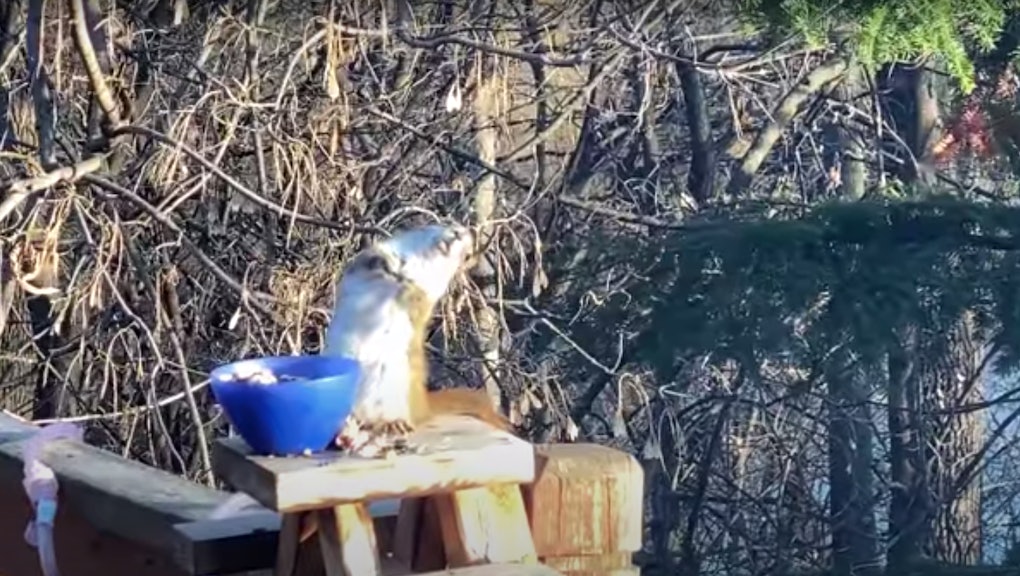 A drunk squirrel was caught on camera last week after it indulged in a bit too much fermented pear. In a video posted on YouTube, the squirrel can be seen staring into the absolute void as the pears hit. Dazed, it slowly drifts sideways as it loses its balance. Then, once the edges of the trees start to blur and it feels the anxieties of a life spent scurrying around the forest floor melt away, if only for a couple of hours, the squirrel clings to the side of the food bowl to steady itself.

And then it dives in for another round.

Honestly, after everything this year has been, this squirrel is a big mood.

The footage was taken in Minnesota by Katy Morlok. She started feeding the wildlife outside her window while working from home, she explained to local station FOX 9, and decided to put out some old pears she found while cleaning her refrigerator.

The squirrel, a frequent visitor she named "Lil Red," took a pear and ran up a tree.

After an hour, he came back down — tipsy and ready for another.

"And then it kind of dawned on me," she told FOX 9. "Oh no, those pears were so old, I betcha they fermented."

Morlok quickly got rid of the rest of the pears, cutting Lil Red off before he got too drunk. She worried about the squirrel all night after he left, but things seemed all right by morning.

"In the morning, he came back for his little hangover breakfast," she said, "and he's been fine ever since."

Tomorrow, our first Thanksgiving drink will be to you, Lil Red. Cheers.

More like this
"Brood X," a plague-level cicada infestation, is coming for us this spring
By Rafi Schwartz
Biden's American Jobs Plan throws $2 trillion at America's crumbling infrastructure
By AJ Dellinger
PPE litter is making Earth's plastic pollution problem even worse
By AJ Dellinger
Stay up to date