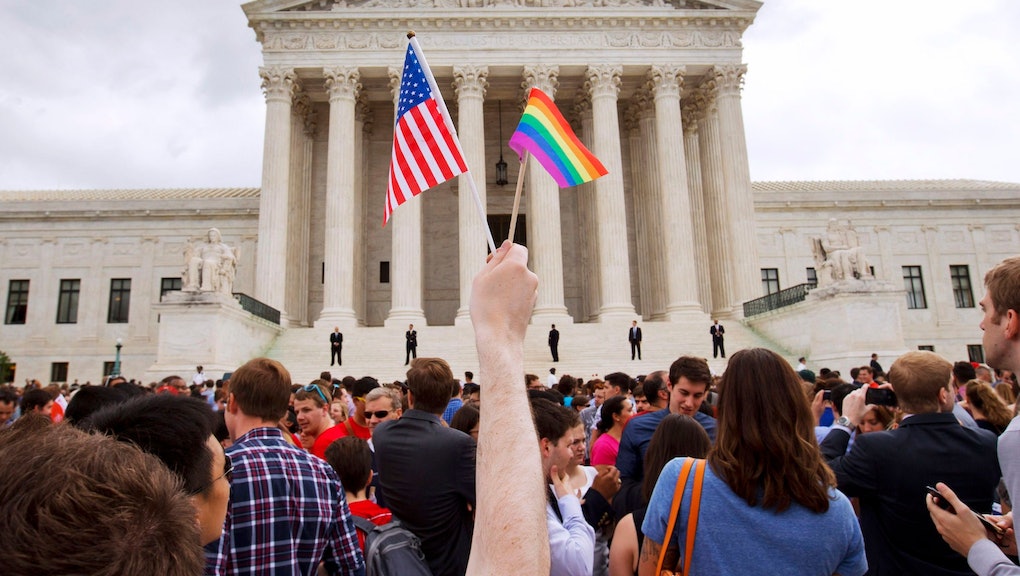 The Supreme Court is set to wade into the LGBTQ rights movement once again. On Oct. 8, just the second day of arguments for the fall term, the justices will evaluate whether the Civil Rights Act of 1964 should be interpreted to prohibit employment discrimination based on sexual orientation.

The Supreme Court agreed to take up the workplace discrimination issue earlier this year, consolidating the cases Altitude Express v. Zarda and Bostock v. Clayton County on their docket. In Altitude Express, former skydiving instructor Donald Zarda sued the New York skydiving company, alleging that he'd been fired because he told a female customer he was "100 percent gay"; Zarda apparently did so to defuse tension because the woman was wary of being strapped to a man for a tandem dive. In Bostock, child-welfare advocate Gerald Bostock alleged that he was let go from his government job with Georgia's Clayton County after he joined a gay softball league; he was told he was fired for "conduct unbecoming of a county employee."

A third case, R.G. and G.R. Harris Funeral Homes v. Equal Employment Opportunity Commission, concerns whether discrimination protections exist for transgender employees. Aimee Stephens, an employee of Harris Funeral Homes, had informed her bosses in a letter that after presenting as a man for years while at work, she intended to come out publicly and begin arriving to work in appropriate women's attire; she was fired two weeks later by the owner of the business, who identifies as "deeply religious" per The Washington Post. The Harris Funeral Homes case will be heard alongside the consolidated Altitude Express and Bostock cases.

The Utah-based Deseret News noted that the court's fall term is particularly consequential for religious freedom advocates as well as those fighting for LGBTQ rights. In addition to the three cases mentioned above, there is a fourth case related to religious schooling that will also be heard during the October term. "The surge in cases can be explained, in part, by the Supreme Court's reticence in recent years to issue broad rulings," Deseret News reported, citing legal experts.

The trio of discrimination cases will comprise the first arguments for the high court regarding LGBTQ rights since 2015's Obergefell v. Hodges, which ruled that the Constitution granted same-sex couples the right to marry. Before Obergefell, there was a series of related cases concerning gay rights, including United States v. Windsor (2013) and Lawrence v. Texas (2003).

In the case of Obergefell, former Justice Anthony Kennedy provided the deciding vote in the 5-4 decision. He retired last July and has since been replaced by Supreme Court Justice Brett Kavanaugh, who along with Supreme Court Justices Neil Gorsuch, Clarence Thomas, and Samuel Alito, gives the court a significant conservative lean. Chief Justice John Roberts, previously a reliably conservative presence, is now at times the bench's swing vote.

FiveThirtyEight reported earlier this year that Kavanaugh's ideological score during the court's October 2018 term was "very similar to Kennedy's score from the [October 2017] term," but Kennedy displayed a willingness to side with the court's liberal wing on certain issues that Kavanaugh has not shown. "The fact that Roberts and Kavanaugh are now at the median means the court's ideological center will likely be solidly conservative going forward," FiveThirtyEight predicted.

And skewed center aside, the outcome may hinge upon semantics — "whether the justices focus on the words of the statute or their sense of what the lawmakers who voted for it in 1964 understood they were doing," The New York Times explained. In this case, a strictly literal interpretation of the law may spell trouble for the LGBTQ advocates.

More like this
The DOJ only prosecutes 17% of hate crime suspects, a damning new report says
By Vanessa Taylor
A state-by-state list of racist Confederate monuments that have been removed so far
By Vanessa Taylor
The U.N.'s human rights chief just called for reparations on a global scale
By Vanessa Taylor
Stay up to date