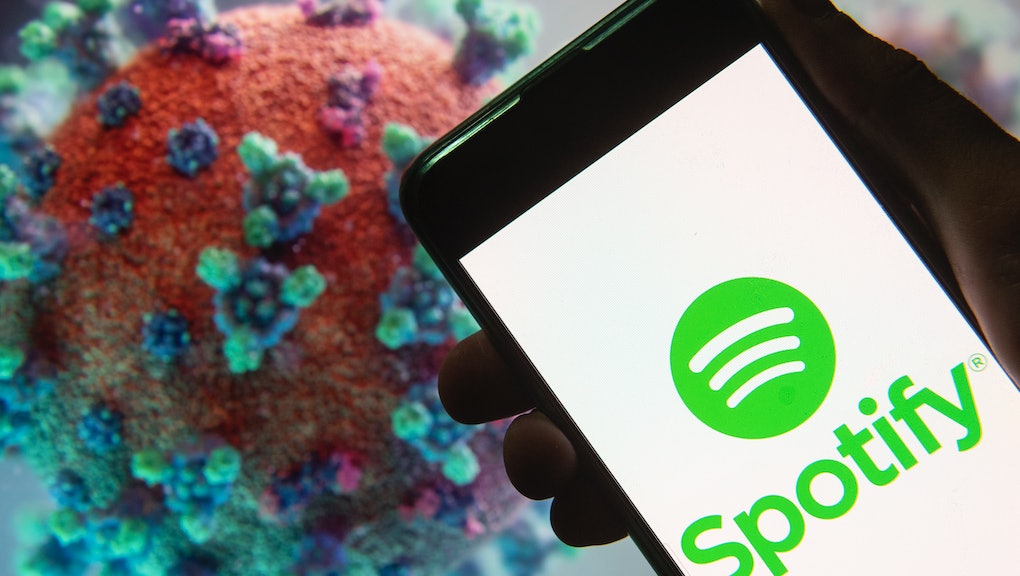 Perhaps counterintuitively, a new report indicates that music streaming has become less of a priority in the times of quarantine, with Spotify streams falling across one major metric in the past month.

According to Quartz, countries impacted the most severely by coronavirus have seen significant declines for the top 200 most streamed songs on Spotify. The report notes a 23% slide in streams of Italy’s top 200 singles from March 3 to March 17 — covering the shift from when Italy’s prime minister announced national quarantine on March 9. Year over year, it’s declined nearly an average of 4 million streams per day — February 2019 brought in 18.3 total streams per day for the top 200, while the recent two week period brought in only 14.4 million per day.

Although less steep of a drop, other countries being hit hard with coronavirus and social distancing practices have seen a similar decline in the top 200 over the same two week period. The U.S. charts slid 13.3%, with Spain falling 12.7% from March 3. The top 200 singles hit 77 million this Tuesday, which was its lowest mark for a Tuesday this year.

So what to make of the shifts in data? Damon Krukowski, one of the early pioneers of exposing the streaming industry’s meager payouts, wondered on Twitter if the dip could be correlating with significant changes in work and commute practices.

Although a report by Statista, conducted with streaming data from 2017, indicated that Friday and Saturday are the most popular days for streaming. This could reflect different practices and anecdotal results for different genres and artists — people likely aren’t bumping ‘90s dream pop before going out on the town, although I’d respect the decision.

That said, with social life as we know it being upended in most every respect, these typical contexts for listening to music at home are changing by the day. Music streaming is now fighting for even more of the same real estate consumed by video streaming and heightened stresses of reading about the pandemic. Under quarantine, those who do commute may not have the same opportunity to carve out an hour in the morning or at rush hour for listening. Another study conducted last year found that Spotify’s most popular times for listening occur between 4:00 and 8:00 p.m., possibly accounting for a large segment of weekly rush hour commute. The restaurant and retail industry’s indefinite hiatus feasibly contributes to the decline in streams, since many smaller establishments are soundtracked by a bartender or cashier plugging their phone into the speaker system.

As every other arm of the music industry faces significant turmoil in the months ahead, artists have already petitioned for Spotify to triple its artist payouts to help cover lost touring revenues. This would undoubtedly be a boost for struggling independent musicians across the world, but would still account for such a meager portion of their income — if Spotify would even be able to deliver immediate aid without pushing the entire business model off its axis.

Bandcamp’s taking a different approach to help replenish months of lost touring income. This Friday, from midnight to midnight PST, the site will be waiving its revenue share to put more money directly in the hands of artists and independent labels. It is certainly bold, decisive action for any industry platform to take, and will be an effective starting point for changing the way we think about helping artists in a time of crisis. Since most artists living paycheck-to-paycheck were never reliant on Spotify’s payouts in the first place, these other avenues could shape a new path for how the industry comes out on the other side of this. It’s going to require radical, instant action from fans, labels, and governments to keep whatever remains of the music world afloat.