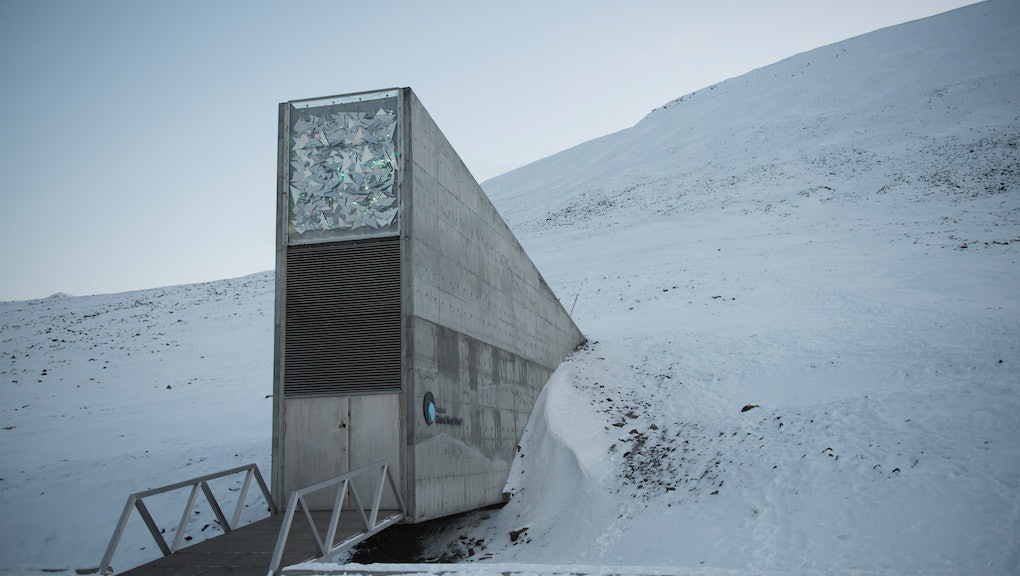 There's a 'doomsday vault' out in Norway, where nearly a million seeds have been stored in case of an apocalyptic event like nuclear war, irreversible climate change, or any other extreme disasters we can't foresee. It's called the Svalbard Global Seed Vault — a metal fortress, embedded 400 feet into a mountain, that lies on an island halfway between mainland Norway and the North Pole. This is where hundreds of thousands of seeds have been donated, preserved, and stored; in a cold vault that's buried in permafrost, where it can hopefully stay frozen for at least 200 years in the event of a power outage.

This is where the Cherokee Nation is storing nine of their traditional, heirloom seeds: Cherokee White Eagle Corn, Cherokee Long Greasy Beans, Cherokee Trail of Tears Beans, Cherokee Turkey Gizzard black and brown beans, Cherokee Candy Roaster Squash, and a few other corn varieties. The seeds are all culturally significant to the tribe and predate European settlement in North America.

The Cherokee Nation will be the first indigenous tribe in the U.S. to store their seeds in the vault.

Preserving these seeds is a significant step towards preserving the culture of the Cherokee Nation.

Storing the seeds is also important to the Oklahoma-based tribe due to the high risk of natural disasters in the area. "If we have a high-magnitude tornado," Gwin explained, "our crops that we've worked so hard to preserve could be wiped out at the stroke of a tornado."

The Svalbard Global Seed Vault is considered one of the most secure and remote seed banks in the world. Although there is concern about climate change causing the permafrost to melt, it's still important to many people as a place to safely store their seeds for future generations in case catastrophe strikes.

"The Cherokee Nation Seed Bank has always hoped to be able to deposit our traditional food crops into Svalbard one day," stated Feather Smith, cultural biologist for the Cherokee Nation, in a press release.

"This is a tremendous opportunity and honor for the tribe," added Gwin. "Additionally, knowing the Cherokee Nation's seeds will be forever protected and available to us, and us only, is a quite valuable thing indeed."