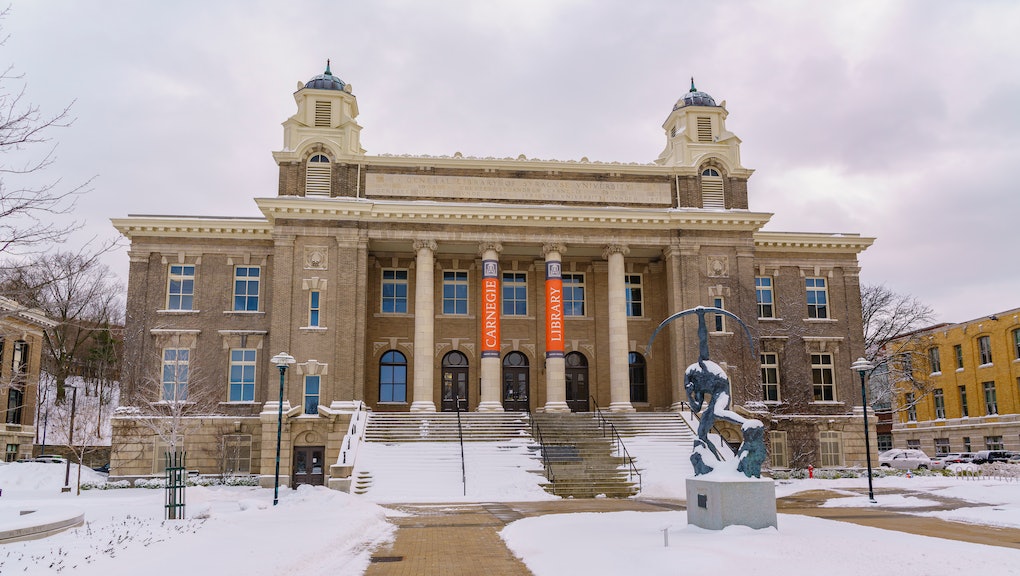 Syracuse University in upstate New York has been rocked by an escalating series of racist incidents that have ultimately prompted the involvement of the FBI and New York Gov. Andrew Cuomo. While racist provocation on college campuses is nothing new, the volume of back-to-back incidents and the means through which they’ve been communicated has led to an uproar, with students refusing to attend class and even leaving campus.

The incidents in question began two weeks ago, when students discovered racist graffiti targeting African Americans and Asians scrawled in a bathroom on campus. Shortly after, a swastika was discovered drawn in the snow near a residence hall. Then, last Friday, a Chinese student reported that he’d been called a racial slur while leaving his dorm; after that, an African-American student was called a “verbal racial epithet,” according to Kent Syverud, chancellor of the university, in an incident involving members of a fraternity.

Syverud’s response to the last episode was to suspend all fraternity activity for the rest of the semester. "While only one fraternity may have been involved in this particular incident, given recent history, all fraternities must come together with the university community to reflect upon how to prevent recurrence of such seriously troubling behavior," he said in a statement. He also announced that a “generous donor” had offered a $50,000 reward for any information leading to the arrest of whoever was responsible.

“It went from vandalism to students of color actively being harassed,” Syracuse freshman Jenna Swetland, who is Asian, told The Washington Post. “It’s getting worse.”

These incidents — reportedly 11 of them in total — caught Cuomo’s attention. On Nov. 11, he called for an investigation into the bathroom graffiti; on Tuesday, he suggested that an independent body should probe Syracuse’s ongoing hate incidents. He also threw doubt on Syverud’s ability to remedy the situation, saying that the incidents “have not been handled in a manner that reflects this state's aggressive opposition to such odious, reckless, reprehensible behavior. That these actions should happen on the campus of a leading New York university makes this situation even worse.”

The past few weeks have created a climate of tension and anger on campus. A group of students has been camping out in a campus building as part of a protest they’re calling #NotAgainSU. Others have left campus amid feelings of anxiety around the rash of racist activity. And early Tuesday morning, someone threw a match into this powder keg.

According to the Post, a group of students were studying in the library when they suddenly received an AirDrop notification that they’d been anonymously sent a document. The enclosed file contained the manifesto written by the man who attacked two mosques in Christchurch, New Zealand, in March. In the document, the man writes about the so-called Great Replacement, the racist and anti-immigrant conspiracy theory he used as justification for killing 51 people in a live-streamed mass shooting. The Post said the document was also posted on a Syracuse-affiliated web forum alongside the message, “We must secure the existence of our people a future for white children,” which invokes the infamous “14 words” neo-Nazi slogan.

The library incident caused panic because it underscored the previously only existentially known truth: The person or people spreading these hateful messages were closeby in the Syracuse community. AirDropping depends on Bluetooth proximity, so whoever sent the manifesto to the studying students had to have been physically in the vicinity of the library. Students left campus and skipped class, afraid of a mass shooting; professors also canceled classes.

“Syracuse University campus is looking extra empty this morning,” tweeted Josh Meyers, a student journalist on campus. “Students are scared for their own safety.”

Even Vice President Joe Biden, who has made combatting white nationalism a top priority of his 2020 presidential campaign, tweeted about events at Syracuse, noting that he received his law degree there. “We are truly in a battle for the soul of this nation, and it requires all of us to stand up together as a country against racism and bigotry. We must give hate no safe harbor.”

Whether it was the work of a troll, a true believer in white nationalist ideology, or both, the AirDrop incident terrified the campus. There’s nothing new about the content of these hateful messages, but there is a degree of technology-enabled viciousness at play at Syracuse that underscores the terrifying ease with which one person can now terrorize another. It’s another piece in the increasingly dystopian puzzle of modern digital life, where as soon as new technology emerges it's disturbingly misused; think China censoring pro-Hong Kong messages on TikTok while mass shooters livestream murder on Twitch.

Even if the perpetrator at Syracuse is eventually caught and expelled, their use of AirDrop to spread violent messages is a frightening example of information terrorism. Students at campuses around the country are already on edge due to seemingly constant mass shootings; meanwhile, college campuses are hotspots for white nationalist activism, as evidenced by the “groyper wars” at right-wing campus events across the country.

Syracuse’s problems portend an ugly future ahead for students. In a campus environment stained by fear and hatred, where mass shootings are almost a routine feature of life and white nationalism is a public force, mass panic can now be sparked by anyone at the push of a button.

More like this
Congrats to GOP Rep. Mo Brooks for tweeting his own passwords out to 100k followers
By Rafi Schwartz
Donald Trump's blogging days are over
By AJ Dellinger
Lara Trump's border solution is for people to "arm up and get guns and be ready"
By Rafi Schwartz
Stay up to date