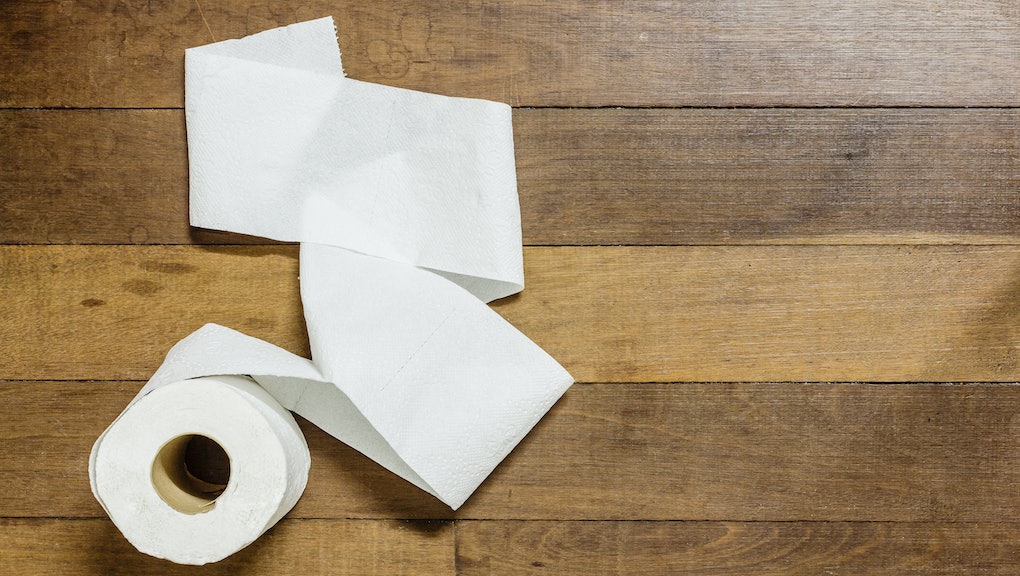 Talking about IBS with other people isn't easy, but it can make having the condition so much easier

As the classic children’s book reminds us, everybody poops, and if you’re one of 10-15% of adults in the U.S. with irritable bowel syndrome (IBS), then you definitely know that better than most. Mayo Clinic defines IBS is a “common disorder that affects the large intestine” that can be caused by a variety of things, including bacteria in the gut. For me — someone who's been living with IBS for the past two years — it’s the mood-killing condition that makes me have to go urgently, especially after I’ve had dairy, booze, or basically anything that’s fun to consume.

Now, there are a lot of things you learn to do when you have IBS, like knowing exactly where the bathroom is in any given place and becoming well-versed on every single probiotic on the market. Another thing you learn when you have IBS, or any other digestive health issue, is how to talk about it.

I’m not a particularly shy person (hell, I’m writing about my poo problems on the internet) and one of my dearest friends has Crohn’s Disease (a chronic inflammatory bowel disease that affects the lining of the digestive tract and results in decidedly unfun things like frequent diarrhea and severe cramps), so I already had someone in my life that I could be open with when symptoms began to flare up. She had been honest with me when we first started hanging out about the how having a stomach-related condition affects her social life, so once I got my diagnosis, I knew she’d be totally understanding.

Still, it took me a little while to be entirely upfront with most other people in my life about why I couldn’t eat certain things or go certain places at certain times. I’d usually give a vague “Sorry, I can’t make it” or would say I had to take a phone call somewhere else so that I could avoid the whole frenzied “I have IBS and this is about to turn into a problem” spiel.

I spoke to three experts about why it’s important for all of us to have a dialogue about digestive health issues, however, because in the famed words of Jurassic Park’s Dr. Ian Malcolm, “When you gotta go...you gotta go.”

You're better off being direct about it

Look, no matter how old you are or where you are in your life, talking about your poop problems can be seriously embarrassing. “I've had lots of patients tell me that they wish they had migraines or back pain or even cancer because those are ‘cleaner’ problems that aren't as taboo to talk about,” says Dr. Melissa Hunt, the author of Reclaim Your Life from IBS: A Scientifically Proven Plan for Relief without Restrictive Diets, a Philadelphia-based clinical psychologist, and faculty member at the University of Pennsylvania.

Additionally, since we live in a culture “which has a very ambivalent relationship with the body, as well as an avoidant relationship with vulnerability,” says San Francisco-based psychotherapist Marty L. Cooper, this can lead to shame and embarrassment, especially when it’s about something poop-related.

There are also legitimate fears when it comes to potential emergency situations. “The biggest fear of many people with chronic GI disorders is that they'll lose control of their bowels and actually have an accident,” says Dr. Hunt. “This fear causes a lot of avoidance of social situations, even if the person has never actually experienced an episode of incontinence.”

Shame is your worst enemy (aside from dairy)

The vicious cycle of shame and avoidance can lead to bigger issues that are directly linked to digestive issues. “In fact,” Dr. Hunt says, “Keeping your GI disorder secret is associated with experiencing more debilitating GI symptoms.”

If you avoid talking to people completely about your IBS, you’re more likely to make the problem that much worse, both emotionally and physically. “IBS is highly correlated with stress, and creating more stress isn’t going to help you get better,” explains Arizona-based mental health counselor and registered dietitian nutritionist Lisa Schmidt.

The stress, anxiety, and embarrassment combine to make people reluctant to reach out for support, which Cooper says “creates a kind of ongoing secret that one feels they have to protect.” And, as anyone with depression or anxiety can attest, that isolation is wildly unhelpful with making progress. (Depression is the reported as the most common psychiatric disorder in those with IBS and over 50 percent of patients who have IBS also have anxiety.)

I can speak to the effects of this reluctance to share personally: Whenever I find myself stressing or worrying about what havoc my IBS might wreak when I’m out at a restaurant or visiting a friend, it only compounds the problem. I start freaking out about what could happen, turning my stomach into a knot. Sometimes it does feel easier to just cancel plans and stay in.

But, as Dr. Hunt points out, “This can be a real problem in personal relationships, because other people often assume that you're just not that interested in being friends with them, or being close to them.”

How to talk shit with the people in your life

Even if you want to talk about IBS in order to maintain your relationships and free yourself of the burden of feeling embarrassed by something that’s so damn normal, you may not know exactly what to say and how to say it. Thankfully, there are ways to talk freely and openly about the condition, although what you say might depend on the situation.

“With [those] who are not as close [to you], only give an appropriate amount of information" that you feel comfortable with sharing," says Cooper. If it's a colleague or casual acquaintance, he says, you can tell them something as simple as “I have an ongoing medical issue that occasionally requires me to cancel plans last minute.”

Schmidt adds that when it comes to discussing concerns about something like your IBS interrupting a meeting or conference call, “Keep it short, matter of fact, and professional.” Simply tell the person that there's a possibility you will have to step away from the call or meeting for a bit.

Most people, she assures, will be cool with it and won’t pry or question you beyond that. In some cases, they may even commiserate and show support. “It’s liberating to have that conversation,” Schmidt assures. “It’s a very helpful thing to talk about.” (Remember, everybody poops.)

If you are talking to loved ones like partners, close friends, or family members, Cooper says you can (and should) be direct and unapologetic. Let’s say you’ve been invited to a dinner party at a friend's house, but you know there’s a very real possibility that your IBS could be a problematic plus one.

Schmidt suggests reaching out to the host soon after the invitation is sent so you’re not stressing out for a longer period of time than needed. You can tell them that you have a not-serious medical issue that sometimes doesn’t allow you to finish a meal without your digestive system being affected. If it’s an issue, Schmidt says to say you’re happy to take a rain check, or if they’re OK with it, ask if they can accommodate your diet.

In fact, Schmidt says disclosing your condition to friends and family is downright important when it comes to living with IBS. If you’ve been keeping it a secret and have had to cancel on people in your life, Dr. Hunt says you can say something as simple as “I know I've been kind of unreliable lately. I want to let you know that I've been having some chronic GI issues that act up from time to time and can make me uncomfortable, limit what or when I can eat, and sometimes send me rushing to the bathroom.”

You can conclude the conversation with: “I really value our friendship/ relationship and I wanted you to know that I'm going to do my best not to let this interfere, but there will be times I will simply need to step out of the concert/dinner for a bathroom break."

All the experts agree that so long as the person you confide in isn’t, ahem, shitty, they’ll be understanding and decent about it, and if anything, your openness and honesty will make your bond with them that much stronger.

While I probably overshare with many people at this point, it’s also made my life and my management of IBS so much easier. There’s something really freeing about being at a bar and telling a friend exactly why it’s time to close the tab. Not only do I not have to lie to who I’m hanging out with, I don’t have to sit there in a frenzied state wondering if I’ll make it in time. That ability to just be real about IBS has made it easier to live with, in every sense of the word.

More like this
The second vaccine shot is actually the star, new research shows
By Tracey Anne Duncan
How to embrace body acceptance without being ableist
By Melissa Pandika
Should I wear sunscreen indoors?
By Caroline Shannon-Karasik
Stay up to date