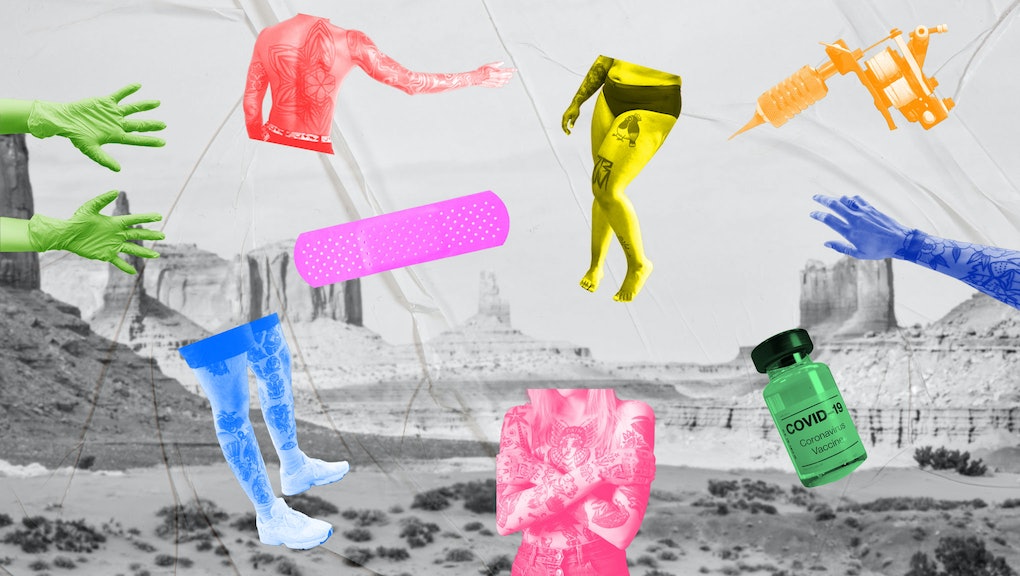 Tattoos and COVID-19 vaccine: How long do I need to wait?

Like many people, I’ve kept a mental list of all the things I want to do once I’ve been fully vaxxed. Near the top of said list — alongside the haircut to help me ditch the wooly mammoth look I’ve been sporting since last March — is getting a tattoo. A friend and I began making plans to get inked together after our second dose, which we both received at the end of April. But as we DMed each other Instagram posts by artists we liked, a question kept nagging me: How soon after my vaccination can I get a tattoo?

As an erstwhile lab rat who also has a handful of tattoos, I know that getting inked can trigger an immune response, and wondered whether experiencing it at the same time as the one spurred by the vaccine would be a good idea. To help me demystify this issue, I spoke with Shobha Swaminathan, an associate professor at the Rutgers New Jersey Medical School and medical director of the infectious diseases practice at University Hospital in Newark, New Jersey.

Let’s start with how tattoos and the COVID-19 vaccines affect your immune system. “A tattoo is essentially a foreign body or ink that’s injected into the person’s skin,” Swaminathan explains. Because your body doesn’t want this foreign ink hanging around, she says, it initiates an immune response, dispatching specialized cells to the tattoo site to target the pigment. COVID-19 vaccines also trigger an immune response that leads your body to produce cells that “remember” how to fight the virus that causes the disease, according to the CDC.

All of this raises the question — if you get tattoo at around the same time as a COVID-19 vaccine, will that alter the immune response prompted by the vaccine? Swaminathan says at this point, we just don’t know. But we do know that tattoo side effects can look like vaccine side effects, which raises another, more pressing question — if you get tatted and vaccinated at roughly the same time and experience side effects, how will you know what caused them?

Vaccine side effects like pain, soreness, and fatigue, as well as rarer ones like the blood clotting reported with the Johnson & Johnson vaccine, occurred within two weeks of injection, Swaminathan says. That’s why she suggests scheduling your tattoo appointment at least two weeks before or after your vaccine appointment, which can make it easier to tease apart whether any side effects you experience are due to the tattoo or the vaccine. She says this same rule of thumb applies to body piercings, which also elicit an immune response.

Why is it important to be able to parse out whether your side effects are tattoo- or vaccine-related? Firstly, a tattoo side effect could require treatment that a vaccine side effect doesn’t. “Typically, persistent redness, pain and swelling from a tattoo could represent a skin infection that may require antibiotics,” Swaminathan says. Dismissing these symptoms as vaccine side effects that’ll go away on their own could prevent or delay you from getting those antibiotics.

From a public health perspective, attributing what are actually tattoo side effects to the vaccine can contribute to misinformation, Swaminathan says, which can encourage vaccine hesitancy at a time when we need as many people as possible to get the jab, stat. Accurately taking note of vaccine-related side effects also allows researchers to track them on a global scale over time, she adds.

Swaminathan would personally opt for scheduling a tattoo appointment two weeks after a vaccine appointment. You can get a tattoo anytime. But again, we need to get as many people as vaccinated as possible for a number of reasons, which include bringing down the number of cases and, amid growing evidence that fully vaxxed people are less likely to transmit COVID-19, slowing the spread of the disease. Vaccinating more people can also help curb the emergence of scary variants. In short, prioritize getting vaccinated over getting tattooed.

When you head into your tattoo appointment, wear your mask, Swaminathan says, and make sure others in the tattoo parlor are masked, too. She points out that you might be indoors, in close quarters with the artist and other clients, whose immunization status you don’t know. Always get tattooed from reputable, licensed places to avoid the risk of bloodborne infections, she adds.

A tattoo is my way of commemorating a period in my life that has utterly and in some ways irrevocably changed me. But the pandemic isn't over yet, meaning everything, including getting inked, still requires more planning than usual, even now that I’m vaccinated.

More like this
Could fresh air be the key to ending the pandemic?
By Melissa Pandika
Vaccinated people won’t likely have long-term COVID symptoms, according to new research
By Tracey Anne Duncan
The plant-derived COVID vaccines of the future won't need refrigeration — and that's huge
By Melissa Pandika
Stay up to date