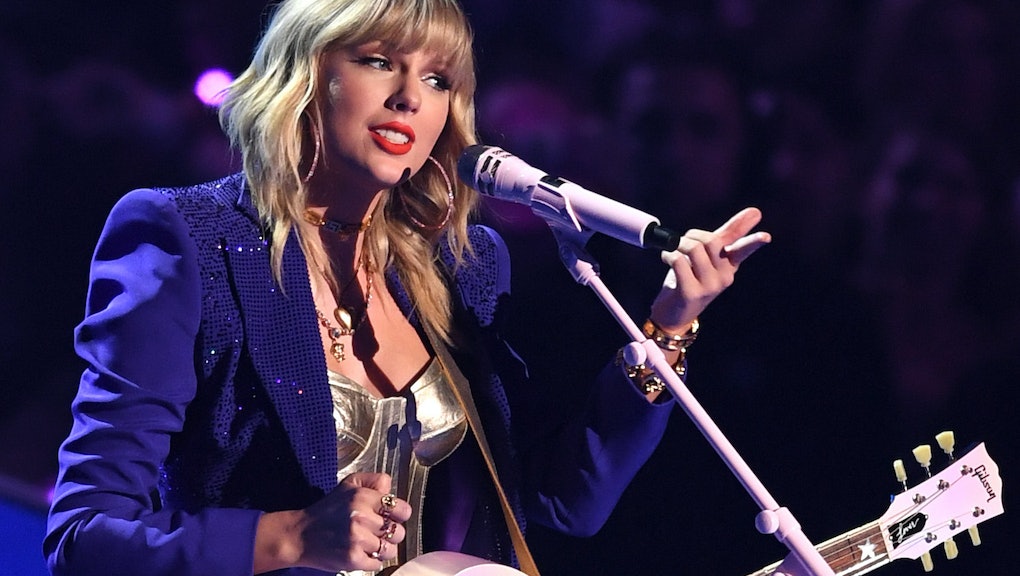 For years, Taylor Swift famously avoided any discussion of politics, maintaining a silence so total that it was eventually co-opted by white supremacists. But in a new interview with Rolling Stone, Swift built on her previous tentative steps toward a political coming-out in her most in-depth discussion of her views yet.

After Donald Trump won the presidency, progressives bemoaned Swift’s lack of activism. The singer finally broke her political silence during the 2018 midterms, endorsing Democratic candidate Phil Bredesden in his campaign for Senate in Tennessee — much to his surprise. Since then, she’s spoken more often about her left-leaning beliefs, and specifically about LGBTQ rights, as when she urged the audience from the stage at the MTV VMAs to sign a petition supporting the Equality Act, which prohibits discrimination based on gender identity or sexual orientation.

In the Rolling Stone interview, Swift addresses why she kept silent for so long — and specifically, why she declined to endorse Hillary Clinton in 2016. During the Obama presidency, the singer explained, she never felt the need to engage closely with politics “because the person I voted for had always won. We were in such an amazing time ... We were so excited to have this dignified person in the White House. My first election was voting for him when he made it into office, and then voting to re-elect him.”

When speaking of her much-maligned neutrality during the 2016 election, Swift further explained that her lack of an endorsement for Clinton had to do not with politics or policy, but rather with the backlash she faced earlier that year as a result of her dispute with Kanye West and Kim Kardashian. In particular, she talked about the personal toll the highly-public feud took on her at the time.

“It’s a very powerful thing when you legitimately feel like numbers have proven that pretty much everyone hates you. Like, quantifiably,” Swift told the magazine, adding that she worried that her endorsement might have negative consequences for Clinton. Now, though, she regrets not getting more involved, and she wants to make sure that nobody harbors any illusions about where she stands. Asked about the reports that a white supremacist website had claimed her as an icon of their cause, Swift said, “That’s just disgusting. There’s literally nothing worse than white supremacy. It’s repulsive. There should be no place for it.”

Brian Hiatt, the Rolling Stone writer who conducted the interview, told Mic that he wasn’t surprised that Swift gave him such detailed, passionate answers. “I knew she had given those subjects a lot of thought — and basically I'm never surprised when Taylor says something smart,” he said, adding, “I think as with a lot of people in America, she's realized that this is a time when silence is no longer an option.”

The interview didn’t exactly break new ground in terms of what Swift believes — she didn’t express specific views beyond support for Democrats and opposition to bigotry, which she’s been talking about for a while. But it did elucidate the kind of soul-searching she’s been doing over the past half-decade, as she’s transitioned from a young country singer to a mainstream pop superstar whom millions of young people look to for guidance. The fact that it took Swift years to get here is hardly surprising considering the harsh criticism she’s endured over the course of numerous perceived scandals throughout her career — many of which, in retrospect, seem wildly overblown. (Remember when she was accused of operating a “cult” because she, uh, had friends?)

And even now, after so many people demanded that she take sides in the culture war, her straightforward progressive activism still sends some into spasms of pearl-clutching doubt over her true motives. Amid this kind of scrutiny, can anyone really blame her for taking a while to find her voice?

Either way, she’s trying now. As another presidential election approaches, Swift is thinking about the “racist, horrific undertones now becoming overtones in our political climate,” she told Rolling Stone, and she wants to do something about it. In particular, she encouraged her fellow Democrats to “be more of a team,” contrasting the party’s fractious approach with Republicans’ strategy, where “if you’re wearing that red hat, you’re one of them.”

With all that’s at stake, Swift said she believes there’s no room for division among those opposed to bigotry. As she told Rolling Stone: “We need to just be like, “You’re a Democrat? Sick. Get in the car. We’re going to the mall.’”

More like this
The U.K.'s biggest asshole is crossing the pond to join the goblin army at Fox News
By Rafi Schwartz
I never want Tucker Carlson to stop talking about Nicki Minaj's cousin's friend's enormous balls
By Rafi Schwartz
Ronald Reagan's would-be assassin is about to get a full, unconditional release
By Rafi Schwartz
Stay up to date