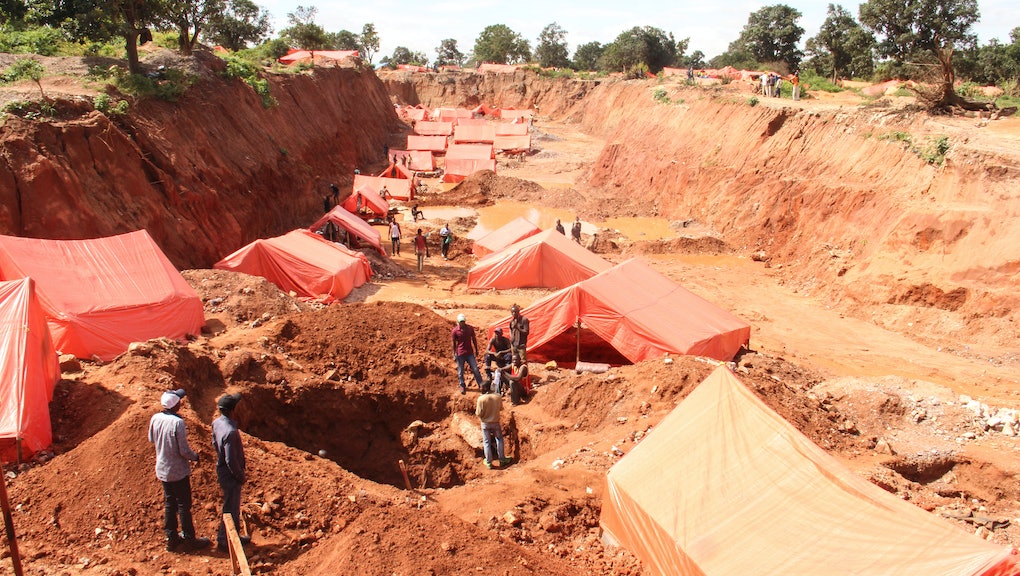 Inside your phone, your laptop, your computer is likely a rechargeable lithium-ion battery. And inside that battery is cobalt, a metallic element that is coveted for its magnetism, hardness, and ability to resist extreme heat and corrosion. Given the growing number of devices in the world, the demand for this element is at an all-time high — and the conditions for workers who are tasked with retrieving it can be deadly. Now, for the first time ever, technology firms that rely on lithium-ion batteries to power the devices they sell all over the world may be held to account for causalities in cobalt mines.

Earlier this week, the human rights organization International Rights Advocates filed a first-of-its-kind lawsuit on behalf of 14 Congolese families whose children were killed or severely injured while illegally working in cobalt mines. The legal action names Apple, Dell, Microsoft, Tesla, and Google's parent company, Alphabet as defendants, and marks one of the first legal attempts to hold companies accountable for the child labor that is utilized within their supply chain. Mic has reached out to the companies named in the lawsuit for comment. A spokesperson for Google responded, stating, "Child labor and endangerment is unacceptable and our Supplier Code of Conduct strictly prohibits this activity. We are committed to sourcing all materials ethically and eliminating child mining in global supply chains. As an active member of the Responsible Minerals Initiative, we work alongside our suppliers, other companies, and industry groups to drive efforts in and beyond the DRC." A representative from Apple told Mic, "Apple is deeply committed to the chain to the mine level and since 2016, we have published a full list of our identified cobalt refiners every year, 100 percent of which are participating in independent third party audits. If a refiner is unable or unwilling to meet our standards, they will be removed from our supply chain. We’ve removed 6 cobalt refiners in 2019.”

The class-action suit specifically claims that the tech giants "aided and abetted" a system that encouraged and in some cases even forced children into unsafe working conditions. International Rights Advocates believes the companies had "specific knowledge" of the fact that children work in cobalt mines but did nothing to stop that from happening despite commitments to do so — all in the name of ensuring their profit margins didn't shrink.

Every company named in the lawsuit claims to not utilize child labor in their respective supply chain. However, in 2014, the United Nations Children's Fund reported that there are an estimated 40,000 children working in mines in the Democratic Republic of the Congo (DRC), digging for metals like cobalt to be used in lithium-ion batteries. The Congo is not alone in this practice — the BBC reported on similarly lax practices that allowed children to mine for metals in Bolivia — but the country has become a hotbed of mining because of the presence of cobalt within its land. A CBS News report last year found that more than half of the world's supply of cobalt comes from mines in the DRC, and about 20 percent of that is mined by hand. Much of the mining is so-called "artisanal" mining, which happens outside of the scope of traditional mining companies. These operations often utilize the labor of children and do not adhere to any of the practices meant to ensure the safety of workers. CBS reported that children as young as 4 years old were found to be working in some of these artisanal mining operations.

These practices lead to miserable working conditions for those digging up the cobalt and other metals. According to the complaint filed by International Rights Advocates, many working the dangerous and physically exhausting jobs are paid as little as $2 per day. In exchange, they are exposed to life-threatening conditions on the regular. Earlier this year, a cobalt mine in the DRC collapsed, leaving as many as 43 dead and many others missing or injured. In some cases, children and others are worked to the point of exhaustion and even death.

Many tech companies have worked to try to push these illegal and dangerous practices out of their supply chain. Last year, Apple announced a plan to purchase cobalt directly from miners so it could keep a closer eye on the practices taking place in the mine and ensure that child labor is not being exploited to dig up cobalt. It was also the only company to comply with a CNN investigation that looked at the suppliers of cobalt that tech companies utilize. Still, most companies — Apple included — appear to be falling short of their own stated goals of removing child labor from their supply chain. Perhaps the legal action from International Rights Advocates will more meaningfully hold them to account.