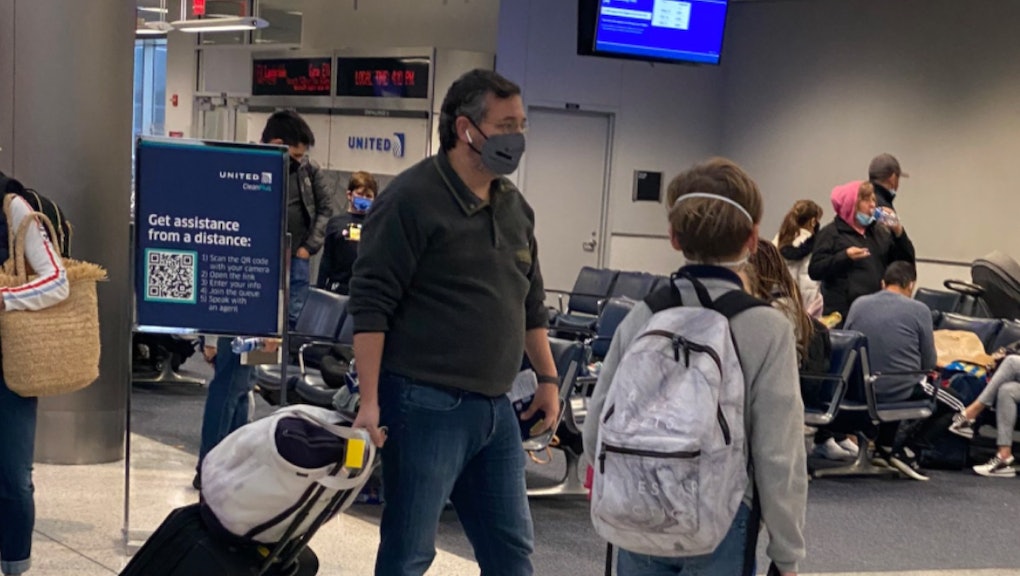 Ted Cruz decided to travel abroad, during a pandemic, while his state is being ravaged by a climate disaster

What is there to say about Texas Republican senator and sedition enthusiast Ted Cruz, beyond "wow, what an unrepentant piece of garbage!"? Truly, for someone whose entire political brand is "sure I'm a terrible person, but at least I'm debilitatingly awkward about it," it's hard to imagine Ted Cruz would find a way to outdo himself after instigating a literal riot on Capitol Hill last month. And yet!

In the midst of the climate change disaster that's ravaging his state and exposing how Texas Republicans have successfully stripped away the crucial social safety net protections that could have helped blunt the damage of this winter cataclysm, Cruz — per multiple citizen journalists, and finally a confirmation from Fox News itself — jetted off to Cancun, Mexico, on Wednesday for a little R-and-R with the fam.

Yeah, he headed off on a fucking beach vacation. While his state freezes to death. In a pandemic.

Look at this smug meat sack, just waiting for a flight like a normal human without any pressing catastrophes weighing on his mind.

Are you boiling over with rage yet? Have you ground your teeth into a fine powder? Does your forehead resemble a topographical map of the Amazon delta, thanks to the veins bulging through your skin?

If not, try this on for size: A Ted Cruz original from just two months ago, mocking Austin Mayor Steve Adler (D) for the unthinkable crime of ... absconding to Mexico ... during a moment of crisis. Now, wait a second here ...

Look. I know Cruz is an irredeemably terrible person with no regard for the people he represents, but holy crap, even I am genuinely shocked (and a little impressed) by just how shamelessly awful this is. And, to be clear, while Cruz is absolutely the villain here, he clearly felt comfortable publicly rounding up the fam and flying off to sunny Mexico during a bona fide crisis — and that's because he's spent the past eight years in the Senate facing absolutely zero consequences for being shamefully awful.

He clearly thinks he'll get away with this, too — or he did, until mid-Thursday morning, at which point it sure seems like Cruz had an abrupt change of heart (or, at least, a change of whatever withered chunk of lifeless meat occupies the chest cavity where his heart should be).

Given that Cruz isn't up for reelection until 2024, it seems as if ol' Ted might have an inkling that latest scandal — somehow more damning than inviting a murderous mob to raid the United States Capitol Building — is the sort of thing that could maybe somehow actually stick on his thus-far-Teflon tushy.

Will it? Only time will tell. But for now, with Texans literally starving and freezing to death, the fact that Cruz seemingly had to be internet-shamed into prying himself off a sandy beach and returning home to the state that elected him is the sort of thing that proves his fellow Republican ghoul Lindsey Graham right.

"If you killed Ted Cruz on the floor of the Senate, and the trial was in the Senate," the South Carolina senator famously intoned, "nobody would convict you."

More like this
Matt Gaetz's alleged sex party pal is officially cooperating with the feds
By Rafi Schwartz
Marjorie Taylor Greene and her team are just openly accosting people in Congress now
By Rafi Schwartz
Buckle up: The investigation into the Jan. 6 insurrection is just getting started
By Rafi Schwartz
Stay up to date