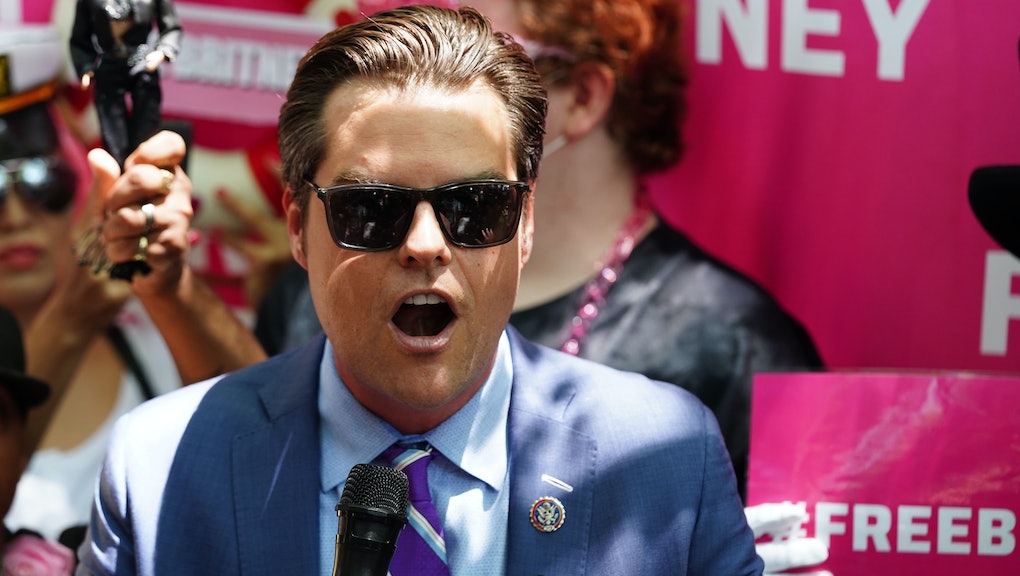 For a case that only stands to have one victor if she prevails, the fight to end Britney Spears's 13-year abusive conservatorship has the public interest in a frenzy. From what was originally a hashtag used to organize small protests of "five to ten" people, as L.A. organizers referenced of their first gatherings, now the fight is on Washington's doorstep, and the #FreeBritney America organization has been officially founded.

Spears's plight has drawn important attention to the misuse of conservatorships, making the legal battle a fascinating intersection of pop culture and politics. But with the public and celebrities en masse showing support for the pop icon, now problematic politicians are weighing in just for the good press, and it's gross.

It's hard to forget the events of 2020 in Washington, when lawmakers couldn't agree on how to help people during a global pandemic. During that time, Sen. Ted Cruz (R-Texas) was one of the most vocal anti-stimulus senators, and proudly blocked progress on infrastructure legislation and regulations that would prevent our worsening climate crisis.

But what does Ted Cruz absolutely fucking love? An easy PR blitz. I'd like to take this opportunity to remind everyone of one of my all time favorite things to exist on the internet, the Ted Cruz queso clip.

Yes, that is Cruz at a Texas cheese competition admitting that he likes to eat queso off of tortilla chips and let it dribble down his chin like the fucking lizard person that he is. And another thing Cruz has now admitted to, with the same tone as a man who will continue to make us endure his presidential bids, is wanting Britney free. He said on his podcast The Verdict With Ted Cruz (I guess someone needs to fill Rush Limbaugh's bloated shoes), "I'm squarely and unequivocally in the camp of Free Britney. I think this is freaking ridiculous what is happening to Britney Spears, and it needs to end."

This, of course, is coming from a man who just last September was trying to have abortion pills outlawed by the FDA, even in the case of life-threatening situations for the mother. The hypocrisy of a man wanting to free a woman from a conservatorship — where one of the abuses revealed in court is the fact that she has had sterilization forced upon her via an IUD — when he very much supports dangerous legislation that robs women of the freedom to control their own bodies, is proof that everything that comes out of his mouth is just an evil fart.

And then cue walking political disaster Rep. Matt Gaetz (R-Fla.), who apparently thinks that even though he's currently at the center of a sex trafficking investigation, someone might still want to see him show up at a Free Britney rally. Gaetz joined protesters outside a Los Angeles courthouse this week and got in front of reporters to say, "Britney's been abused by the media, she's been abused by a grifter father, and she has been abused by the American justice system." He added what was unfortunately a hit with the crowd because it's true: "There's a lot that still divides us, but one thing we can all agree on is that Jamie Spears is a dick."

But more infuriatingly, Gaetz is a similar offender to Cruz in that he is ardently anti-choice (they call it pro-life, but when women could die due to the laws they want to put in place, I refuse to get on board with that colloquially). He also said this, and I don't even know where to begin to unpack the racist and disgusting ideas this man espouses:

While ending the unfair and dangerous abuse of conservatorships is important work that legislators should legislate, the fact of the matter is that what men like Ted Cruz and Matt Gaetz want to do to women will do more nationwide harm (especially to poor women and women of color) than what a privileged woman like Spears is going through and getting extreme support to escape. While I also adamantly agree Britney Spears must be freed of her guardianship, the women that Cruz and Gaetz want to trap in a system of reproductive injustice will not have wealthy lawyers and cute PR moments on their side — and these disingenuous press moments can't hide that.

More like this
In a #FreeBritney era, will we treat Olivia Rodrigo differently?
By Brandon Yu
Matt Damon would like your forgiveness now
By Brandon Yu
Large adult son Andrew Giuliani won't stop talking about cheese for some reason
By Rafi Schwartz
Stay up to date