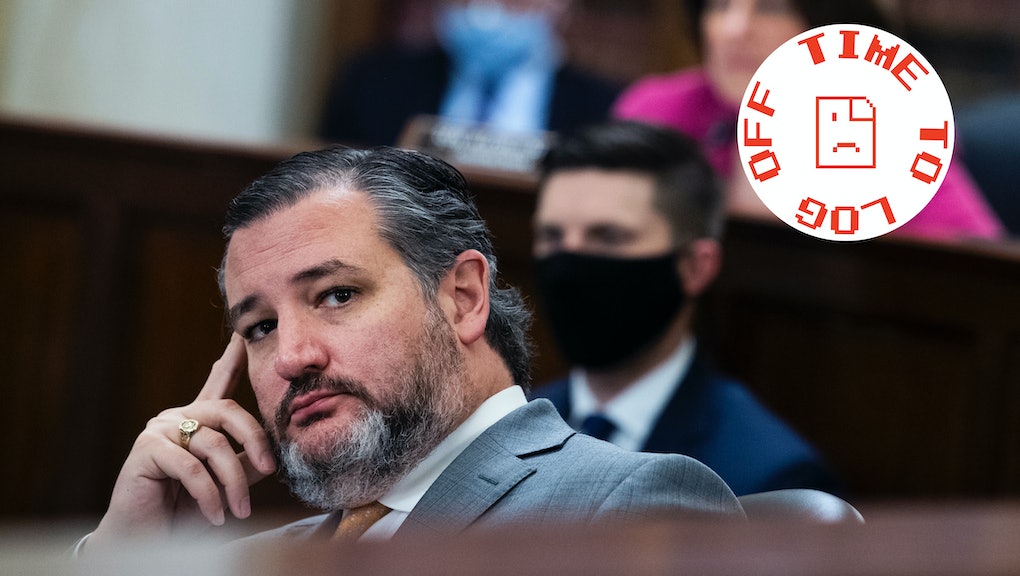 Ted Cruz, you dunce, you Eddie Munster-looking nincompoop, it's time to log off

Time to Log Off is a weekly series documenting the many ways our political figures show their whole asses online.

Let's get one thing clear right off the bat: Texas senator and sedition enthusiast Ted Cruz is very bad at being very online. He tries, god help him. He really does. But he just sucks at it. Remember when a "staffer" liked a hardcore porn video from his official Twitter account? Of course you do. One doesn't easily forget the trauma of being forced to imagine what sort of erotica Ted enjoys. Or what about the time he posted a video of himself very earnestly saying the pledge of allegiance in a manner which in no way whatsoever made him look like a twerpy grade schooler? And who could forget the time he tried to dunk on some random T-shirt owner, but accidentally showed that he creep-searches his own name online? What I'm saying here is that the man is an embarrassment for the terminally online community.

And yet, like the dedicated shitposter that he is, Ted simply refuses to log off. Which is how we get to this:

In his initial — and now deleted — tweet, Cruz shared the above video as an attempt to dunk on President Biden's handling of the American withdrawal from Afghanistan, writing: "This horrifying image encapsulates Joe Biden's Afghanistan catastrophe. The Taliban hanging a man from an American Black Hawk helicopter. Tragic. Unimaginable."

The problem, which he kinda-sorta acknowledged while still downplaying his culpability in his apology tweet, is that ... well, that's not what's happening in the video. Like, at all.

While Cruz is technically correct that the video does show a man dangling beneath what appears to be a U.S. helicopter, what's actually happening is far less malign than he'd have you believe. The hanging man in question isn't being executed by the Taliban, so much as he's wearing a safety harness while trying to mount their flag.

What's more, as freelance journalist Bilal Sarwary claimed in a separate tweet, the chopper pilot was in fact trained by the U.S. to fly the helicopter in the first place.

But, let's go back to Ted for a moment (I know, I know, just typing that made me feel dirty). In essence, his half-hearted mea culpa is as follows:

I tried to tweet a snuff film to score political points.

I got every part of it wrong.

Keep in mind, as well, that this man is a United States senator, with access to both military intelligence reports and an entire team of communications specialists. And yet, here he is, absolutely bungling it on both fronts. It'd be impressive if it weren't so ghoulishly craven and coming from a position of immeasurable influence and power. Unfortunately, that's exactly where Cruz is, which is a real shame for many, many reasons. So if he's not going to resign from office, and the people of Texas aren't going to vote him out, the very least he could do to make up for how awful he's been is admit that now, more than ever, it's time to log off.