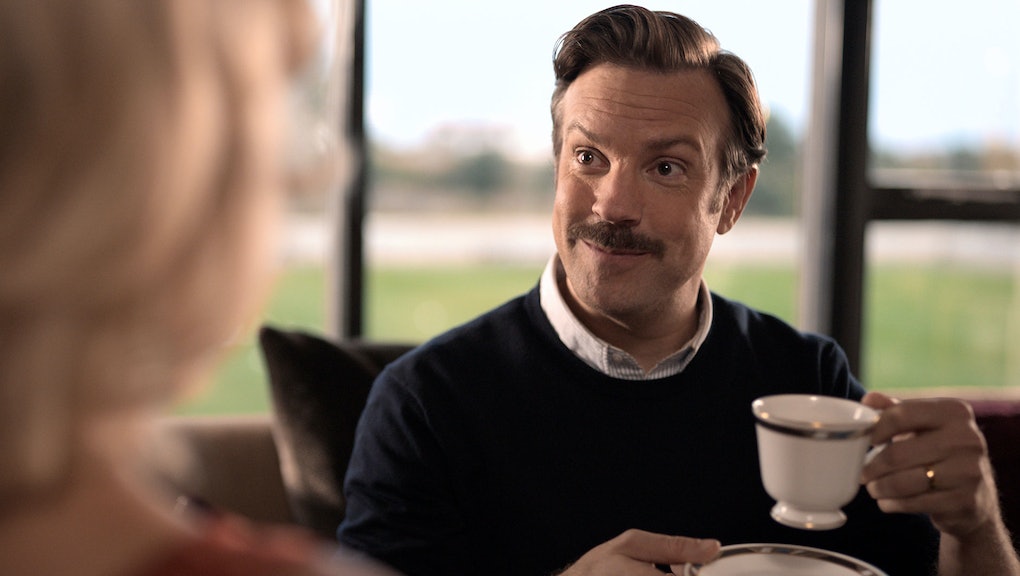 Ted Lasso wins a Peabody Award for killing us with kindness

It was a pretty good indication Ted Lasso was something special when Brené Brown, research professor and mental health guru, appointed herself president of the TLFC (Ted Lasso Fan Club). As the beloved Apple TV+ series warms up for season two, drop kicking onto our screens July 23, it's picking up even more prestigious accolades. On Monday, Ted Lasso won a Peabody Award for for "offering the perfect counter to the enduring prevalence of toxic masculinity, both on-screen and off, in a moment when the nation truly needs inspiring models of kindness."

The star and co-creator of Ted Lasso, Jason Sudeikis, has gently rebuffed the notion that his show became a mega-hit because 2020 genuinely sucked. But it's hard to argue with the fact that the optimistic, feel-good series arrived at a really auspicious time: last August, as the COVID-19 pandemic was stretching into its sixth month, society was reeling from police violence and racial injustice, and Donald Trump was still spitting lies and vitriol virtually unchecked from the nation's highest office.

The Peabody jury pointed out that Ted Lasso has "all the markings of a formulaic cornball dud. A seemingly homespun and loquacious American football coach from Kansas is hired to run a London 'football' team — soccer, of course, a sport about which he knows nothing," they said in a statement. "What this presumably Ugly American, fish-out-of-water tale offers instead is a charming dose of radical optimism."

"It turns out that more than simply a sports coach, Ted is remarkably good at honest communication with others, affecting change by being a deeply good human being, one with his own quiet anxieties and pain," the Peabody jury added. "Indeed, much of the personal transformations in the characters and their extended relationships occurs through the ripple effect of Ted's radiant optimism and intensely sincere, if folksy, good will."

The Peabody Awards have bee around since 1940 and honor the most powerful, enlightening and invigorating stories on television, radio and online. It's not the first prize Ted Lasso has picked up; Sudeikis won both a Golden Globe and a SAG Award for playing the titular coach. The actor recently told Entertainment Weekly that Lasso's saintly persona is "tough to live up to" in real life. But Sudeikis said witnessing the impact of his series has been "profound," adding: "Not a day goes by when I don't receive a message from someone talking about how the show affected them."

More like this
8 shows like 'Ted Lasso' to watch if you need more feel-good TV
By Brandon Yu
What could possibly explain Carrie Bradshaw shopping at Forever 21?
By Kara Weisenstein
Even 'Arthur' can't escape the cynical rules of modern entertainment
By Brandon Yu
Stay up to date