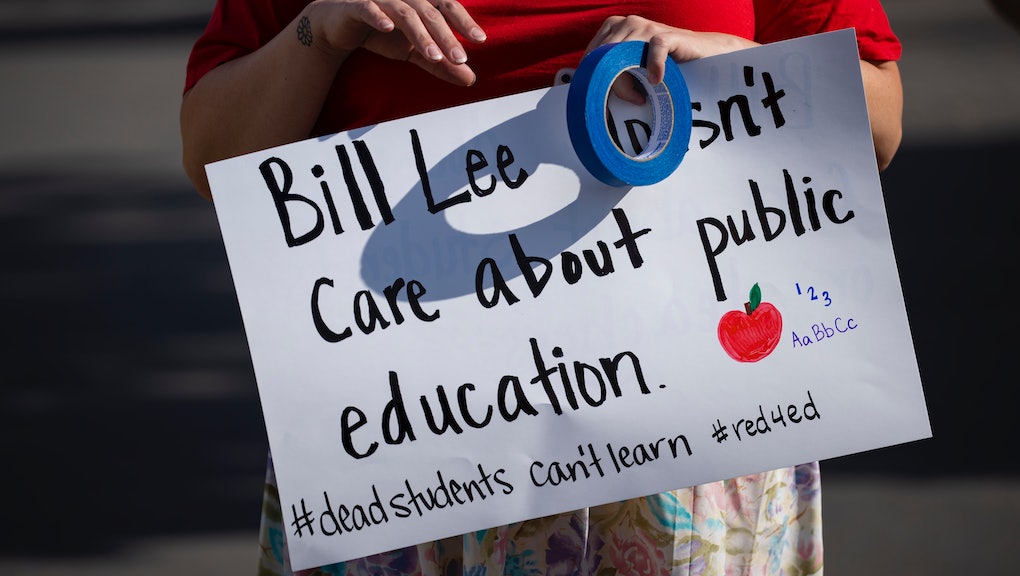 Being a public school teacher is a thankless enough job as is, without the prospect of millions of dollars worth of fines being levied against your school district because you had the audacity to teach the unimpeachable truth that the United States might not be a perfect capitalist utopia.

That, however, is the unappealing prospect facing educators in Tennessee, thanks to a new guidance released by the state's Department of Education last week. The proposal details potential penalties for teachers and schools that knowingly violate a recently passed law banning the teaching of so-called "critical race theory" (itself a very specific academic framework that has been co-opted as the latest meaningless buzzword for GOP culture warriors who are too chickenshit to just say "racism").

Per the rules issued by the DoE:

Those withholdings can add up to some serious funds, too. As the guidance states, knowingly violating the new law just once can result in the loss of "2% of annual state funds scheduled to be granted to the LEA or $1 million, whichever is less." Those numbers skyrocket to 10% of annual state funds, or $5 million if a school is found to have violated the law five or more times. On an individual level, teachers could have their licenses suspended or revoked.

And let's be clear here: The things that could get a school slapped with a sizable fine or other punishment are — to any reasonable person — extremely benign. Here, per the DoE, are the subjects and concepts officially declared verboten by the state of Tennessee:

a. One (1) race or sex is inherently superior to another race or sex;

b. An individual, by virtue of the individual’s race or sex, is inherently privileged, racist, sexist, or oppressive, whether consciously or subconsciously;

c. An individual should be discriminated against or receive adverse treatment because of the individual’s race or sex;

e. An individual, by virtue of the individual’s race or sex, bears responsibility for actions committed in the past by other members of the same race or sex;

f. An individual should feel discomfort, guilt, anguish, or another form of psychological distress solely because of the individual’s race or sex;

g. A meritocracy is inherently racist or sexist, or designed by a particular race or sex to oppress members of another race or sex;

h. This state or the United States is fundamentally or irredeemably racist or sexist;

i. Promoting or advocating the violent overthrow of the United States government;

k. Ascribing character traits, values, moral or ethical codes, privileges, or beliefs to a race or sex, or to an individual because of the individual’s race or sex;

l. The rule of law does not exist, but instead is series of power relationships and struggles among racial or other groups;

m. All Americans are not created equal and are not endowed by their Creator with certain unalienable rights, including, life, liberty, and the pursuit of happiness; or

n. Governments should deny to any person within the government’s jurisdiction the equal protection of the law.

By these metrics, teaching United States history becomes an anodyne exercise in sterile platitudes and cherry picked Hallmark sentimentality. Which is, I suppose, the point to this latest conservative push to police potential kindergarten thought crimes, whether by banning it outright or by turning the classroom into a panopticon of kiddie surveillance. And while Tennessee is far from the only GOP-controlled state to freak out over Critical Race Theory, the 1619 Project, or any other genuinely insightful exploration of America's deeply checkered past, it is very much at the cutting edge of that moral panic attack.

According to the Tennessean, residents now have until August 11 to offer their feedback and critiques of the new guidelines to the Board of Education.