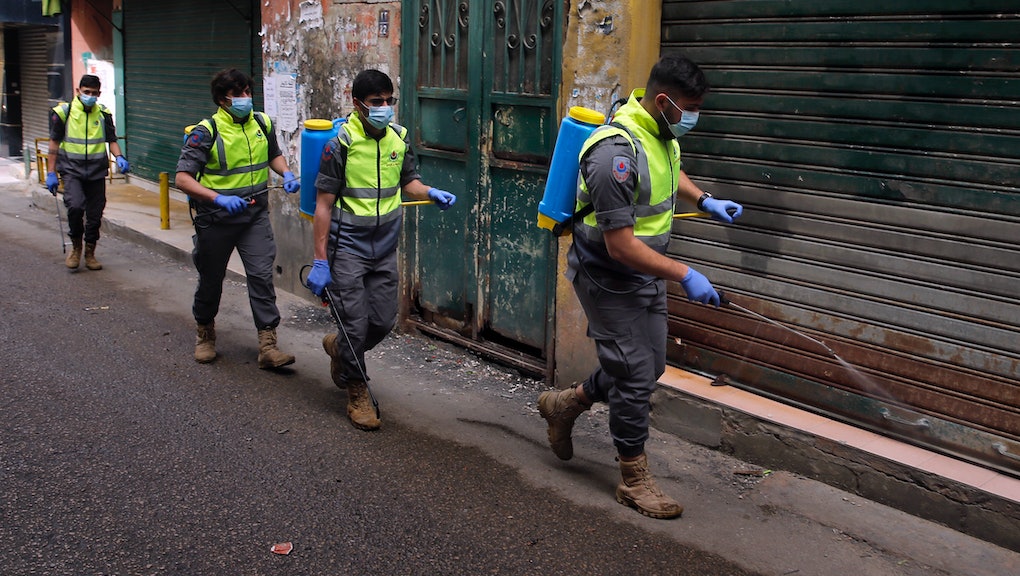 Terrorists, militants, and criminal gangs join the fight against coronavirus

The favelas of Rio de Janeiro are a toxic mix of tight quarters, few if any health services, and little clean water for residents to wash their hands.

In these conditions ripe for the spread of coronavirus, the Brazilian national government has yet to impose a curfew — but the criminal gangs who rule the favelas have.

Gang members have been driving around their communities announcing to residents: “We’re imposing a curfew because nobody is taking this seriously. Whoever is in the street screwing around or going for a walk will receive a corrective and serve as an example.”

This curfew is part of a growing phenomenon across the globe, where criminal gangs, insurgents, and terrorist groups are mounting efforts against the pandemic.

What are they doing?

In Lebanon, the militant group Hezbollah has mobilized 1,500 doctors, 3,000 nurses and paramedics, and 20,000 more activists to fight coronavirus.

“It is a real war that we must confront with the mindset of a warrior,” Sayyed Hashem Safieddine, the head of Hezbollah’s executive council, told a Reuters reporter. The group operates hospitals, where it is providing free testing and treatment for COVID-19. It is also renting out hotels to be used as quarantine facilities.

In Afghanistan, the Taliban has disseminated videos on disinfection and mobilized its fighters to hand out face masks and soap. Libyan rebel forces have imposed a curfew from 6 p.m. to 6 a.m. in an attempt to curb the spread of the virus.

Hamas, an Islamist group that rules the Gaza Strip in Israel, is building two massive quarantine facilities. A recent edition of a newsletter distributed by the Islamic State includes a number of directives to address the disease.

Why do they care?

As a scholar of armed-group behavior, the actions taken by all of these organizations are far from surprising. In many countries, criminal gangs, insurgents, and terrorist groups govern areas where the central government’s power is weak or nonexistent.

Some of these groups already provide social services, like medical care, education, and an organized way to resolve disputes — analogous to a rudimentary justice system.

A weak pandemic response from a formal government creates an opportunity for the violent group to earn legitimacy in the eyes of the public. Violent groups often take actions to gain legitimacy in order to gain support from civilians living under their rule as well as potential supporters abroad. Some groups create flags and currencies, and their response to the coronavirus could be a strategy in line with efforts like these.

Another potential reason for these groups’ efforts could be that many of them operate in areas where their family and friends live — so they naturally want to help keep their people safe and healthy.

While areas ruled by violent groups may be out of reach of the government, they are well within the reach of coronavirus. And the virus’s potential spread requires a response unbiased by perceptions of who has the right to rule a given population. In order to save the most lives, sectarian and political divisions must be placed aside in favor of working with any group with the capacity and willingness to put a stop to the virus.

Humanitarian organizations like the Red Cross and Médecins Sans Frontières have a long history of working with violent groups, viewing them as necessary partners for aid to reach civilians living under their control.

The Taliban, along with other violent organizations, has an official policy that requires aid organizations to register, but allows them to operate in Taliban territory. A Taliban spokesman recently promised that “if, God forbid, the outbreak happens in an area where we control the situation, then we can stop fighting in that area.” The group has also offered security guarantees to any aid organization seeking to assist victims of the virus or helping to stop its spread.

Yet relationships between humanitarian organizations and violent groups can be fraught, including governments blocking humanitarian groups’ access to rebel territory, militants failing to protect aid workers, and the fact that violent organizations don’t always use aid they way they promise to.

Despite these challenges, that so many violent groups are mobilizing to protect their people from this disease underlines the seriousness of the threat — and the urgency of collaboration between governments, humanitarian organizations and violent groups, especially in areas where normal government services don’t exist.

This article was originally published on The Conversation by Jori Breslawski at the University of Maryland. Read the original article here.