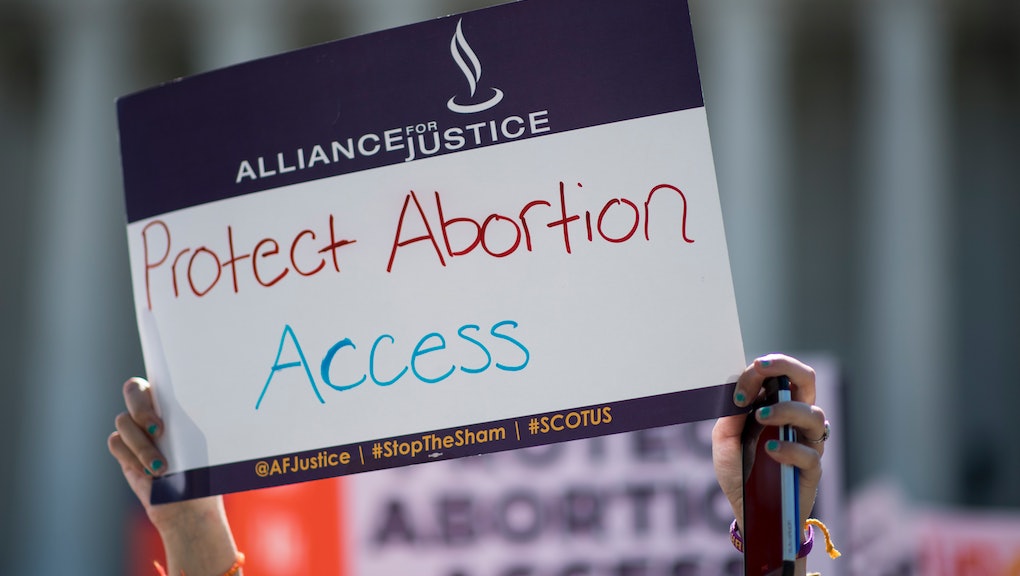 Texas Republican Gov. Greg Abbott this week signed one of the nation's most restrictive anti-abortion measures into law, placing his state at the epicenter of the ongoing conservative effort to curtail, and ultimately end, the ability for people to make their own reproductive health decisions.

The so-called "heartbeat bill" signed by Abbott on Wednesday amounts to a de facto total ban on pregnancy terminations by criminalizing abortions performed at or after six weeks into a pregnancy — just two weeks after a missed period, and well before many people would even be aware that they are pregnant.

During a crowded signing ceremony, Abbott claimed the new law "ensures that the life of every unborn child who has a heartbeat will be saved from the ravages of abortion." Later, he added: "In Texas, we work to save those lives."

While Texas is not the only state with a deeply restrictive anti-abortion "heartbeat" law on the books, it is the first to shift the onus of enforcement from law enforcement onto civilians, who are now able in Texas to file private lawsuits against doctors who perform abortions, as well as anyone else who assists in the process. While the new law does make exemptions for medical emergencies, it does not offer exceptions for victims of rape.

If unchanged, the law will likely result in a situation in which abortion providers, nurses, health care counselors, and even family members, can be sued for helping a person obtain an abortion. And even if those people ultimately win their lawsuit, the cumulative effect will be a massive logjam of costly and time-consuming legal battles that will unjustly drain resources and funds from patients.

In a statement blasting the new law, AVOW (formerly NARAL of Texas) was blunt:

The intent of the bill is clear: to avoid constitutional scrutiny by not allowing the state to enforce its own restriction and to destroy the infrastructure created by abortion funds and advocates that ensures even the most marginalized communities can access the care they need.

Speaking with the Texas Tribune, Amy Hagstrom Miller, the executive director of the abortion-providing clinic Whole Women's Health, estimated that 90% of her clients were more than six weeks pregnant when they came to the organization. "This culture of threats and accusations is designed to intimidate providers," she added.

Civil and reproductive rights groups have already vowed to challenge the new law, with Harris County, Texas, chief civil lawyer Christian D. Menefee telling The New York Times that he looks forward to the courts invalidating the rule. "But," he lamented, "it's embarrassing that we even got this far."

More like this
"Our society is really totally nuts": Newly revealed emails show how Fauci really felt during the pandemic
By Rafi Schwartz
Supreme Court justices' political leanings: A guide to the 2021 court
By Vanessa Taylor
Watch this Texas teen's valedictorian speech blasting her state's new anti-abortion law
By Rafi Schwartz
Stay up to date