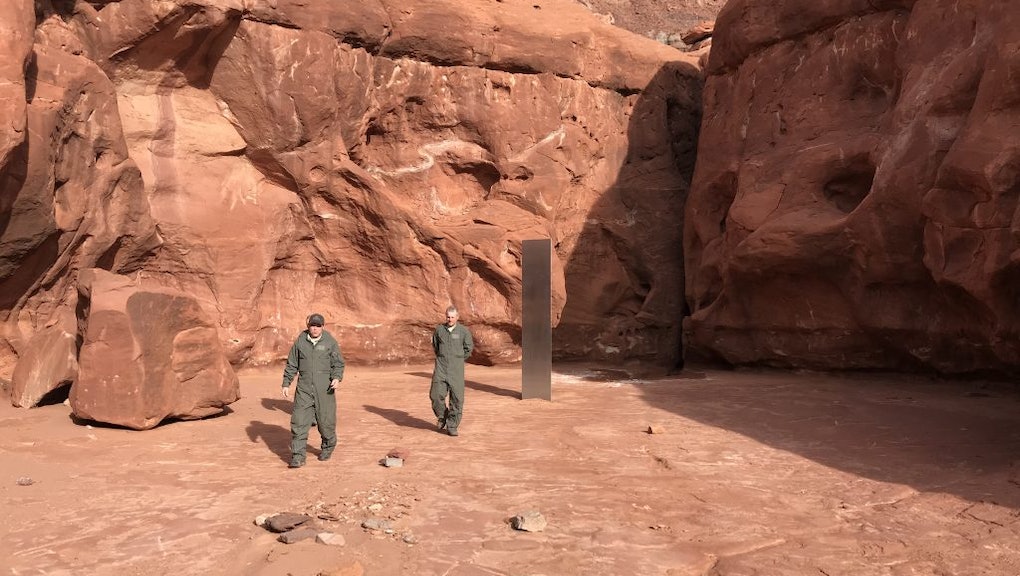 That mysterious monolith in Utah has vanished without a trace

Last week, the internet became enamored with a big, shiny, metal monolith discovered by authorities in the middle of the Utah desert. On Friday, the mysterious monument disappeared without a trace, fueling theories about what it was and where it’s gone.

The Utah Bureau of Land Management (BLM) confirmed the disappearance of the monolith on Friday but provided little detail beyond that. In a post on Facebook, the agency explained, "The BLM did not remove the structure which is considered private property. We do not investigate crimes involving private property which are handled by the local sheriff’s office."

Local law enforcement has yet to chime in on the development, so it appears for now that the monolith has left just as mysteriously as it arrived. Mic has reached out to the San Juan and Grand County Sheriff’s Offices for additional details but did not receive a response at the time of publication.

It's not clear when the metal structure first arrived in Utah, though Business Insider has reported that it can be seen on Google Maps dating back to 2015. but it was spotted from overhead by the Utah Department of Public Safety's Aero Bureau on November 18. Biologists from the department were flying by helicopter to count bighorn sheep in the region when they spotted the bizarre installment. Officials told the New York Times that the metallic pillar was between 10 to 12 feet tall and had been planted firmly into the ground, perhaps with a concrete cutting tool.

As soon as the structure was made public, rumors started swirling about its origins and how it ended up in the Utah desert. Some suggested it was a piece of art, perhaps from a sculptor like John McCracken, who was a fan of science fiction and had a history of leaving his art in remote locations in hopes of someone stumbling onto the creation. Others suggested it might be aliens because, well, it sure seems like something aliens would do. Law enforcement simply called it illegal, as the Utah Department of Public Safety said that "using, occupying, or developing the public lands or their resources without a required authorization is illegal, no matter what planet you are from.”

While the exact location of the monolith was never revealed by officials, people managed to find it and pictures and videos of the object started to flood social media. The fact that it was so easily discovered once its existence was known makes the disappearance all the more interesting. No one was around to see its removal? No one left a camera to keep an eye on it? The monolith brings us no answers, only questions.