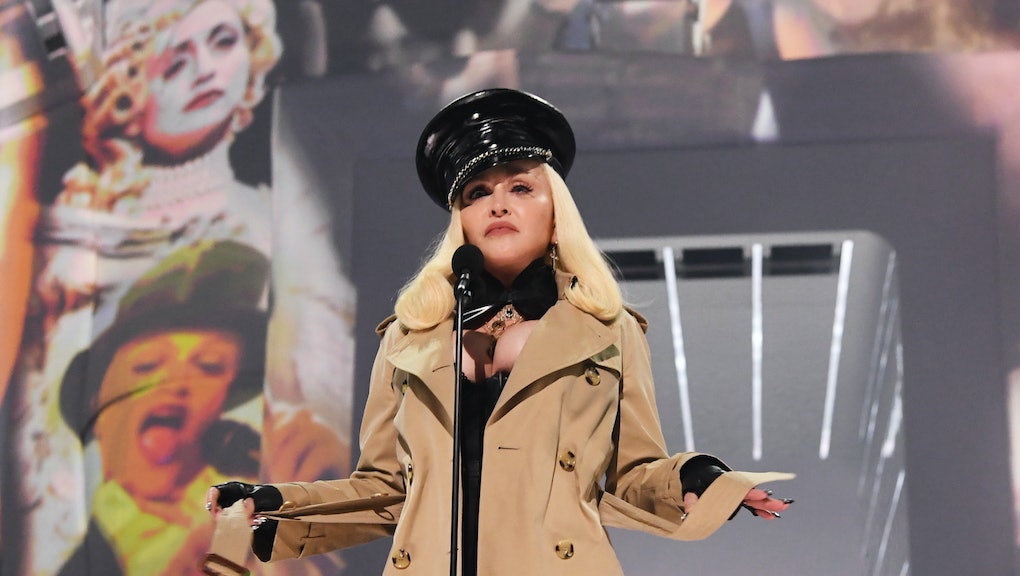 The news you might hear the most about last night’s VMAs is that Conor McGregor and Machine Gun Kelly got into a little bit of a spat. The nature of the incident is unknown, but the UFC champion appeared to have thrown his drink at the rapper-turned-rocker before the two were separated. It’s a funny bingo card celeb moment — and it’s also tragically a sign of the times for what used to be a cultural phenomenon.

In 2021, this is the best we get at the Video Music Awards. MTV’s flagship music awards show used to have everyone in a tizzy with each annual gathering and often felt like a flashpoint for the culture wars, but music is different now. Celebrity culture and fame are different. A world champion cage fighter, who is for some reason presenting Artist of the Year at a music show, tossing his whiskey at one of our least exciting (outside of dating Megan Fox) artists in what may or may not have been a manufactured moment to create buzz for that same artist’s performance closing the ceremony (why, for the love of all that is holy, did Machine Gun Kelly of all people close out the show?) — that’s about as tantalizing a moment as we can get from the VMAs.

In the past, the VMAs was a singular cultural event — for anyone remotely interested in pop culture, it was appointment television that would anoint instantly iconic moments every year, from Madonna’s kiss with Britney Spears and Christina Aguilera and Kanye’s infamous interruption of Taylor Swift to Lady Gaga’s meat dress and Lil Kim’s purple pasty. MTV knows this — they’re actually haunted by this fact. Madonna, the artist who is arguably most tied to the award show’s once outsize reputation for iconoclasm, was the surprise guest that rang in this year’s show. “And they said we wouldn’t last,” she said, before somewhat clumsily repeating herself over the applause. “But we’re still here motherfuckers.”

It was an opener meant as a distinctly MTV Middle Finger, but instead read ultimately as a clunky introduction that set the tone for a show that can only highlight its past for lack of a proper future. Madonna’s line and this year’s ceremony were written to celebrate and honor MTV’s 40th year on air, a milestone that was referenced throughout the show. It is a legacy worth celebrating, but it made the happenings of the night itself feel all the more dead. There was a slew of performances but few moments if any truly stood out, and the entire thing quickly began to drag.

The show, though, was doomed from the start, as the landscape that once made the VMAs such a moment has fundamentally shifted. The reality is that our relationship to celebrities and the chatter over their mishaps or beefs don’t ring the same way they do in a post-social media age. Lady Gaga stunned everyone when she wore an odorous meat dress in 2010. This year, the night’s host Doja Cat wore a literal chair on her head (that she eventually took off and sat on later on in the night), waddled around in a “worm” suit, and stood on multi-hued chicken feet heels. But what’s the point in talking about Doja Cat being weird, when you can watch her be weird on her own homemade Tiktoks, or in videos of her streaming on Twitch or appearing in questionable chatrooms?

Built into this shift, the pool of celebrity has become larger — and the definition of celebrity itself has changed — than it was less than ten years ago (it’s no coincidence there were more performances this year than ever, as Doja Cat proclaimed at the top of the show). There’s too much content, too many avenues to be a star, and if everyone can be a star — and we can all watch and interact with these stars’ daily behaviors — a room full of them shines just a little less bright, and the overall chatter about it all is a lot less loud. MTV itself seems to have accepted its fate as a now obsolete purveyor of what’s cool — it’s now just a channel that plays Ridiculousness on a loop everyday and throws two perfunctory awards shows a year.

The pace of this shift has been rapid. Just a decade ago, one might still hear about the gripe that MTV is no longer a channel that played or showcased music itself — now, nobody bothers with that argument, because arguing about the programming on a cable channel is like complaining about the songs they play on a radio station. Meanwhile, the VMAs was still a cultural force in the first half of the 2010s, only a handful of years ago. Take, for instance, the 2011 VMAs, as a viral Tiktok documented: Beyonce famously revealed her first ever baby bump after a show-stopping performance, Jay-Z and Kanye gave us a taste of Watch the Throne, Adele rang in her 21 era, a fresh-faced Bruno Mars performed a big tribute to Amy Winehouse, and Tyler, the Creator was anointed Best New Artist, bringing up his Odd Future crew and introducing the mainstream to a new way to embody hip-hop.

Granted, enough time has passed to simply look back at some of these shows that with rose-colored glasses. Nostalgia is enough to transform reality. But taking stock of last night’s show — can one imagine gasping or laughing or even remembering a single moment from the evening in ten years?

Of course, there is nothing inherently wrong about all this. The zeitgeist will always have undergo tectonic shifts and some traditions and events adapt or don’t. The VMAs just happens to be a casualty that ultimately didn’t — not entirely for fault of its own, but simply because the rules of fame and culture are fundamentally different now. It just means that we’ll no longer be reacting to what happened on MTV last night — we’ll just be scrolling past a headline about Machine Gun Kelly.