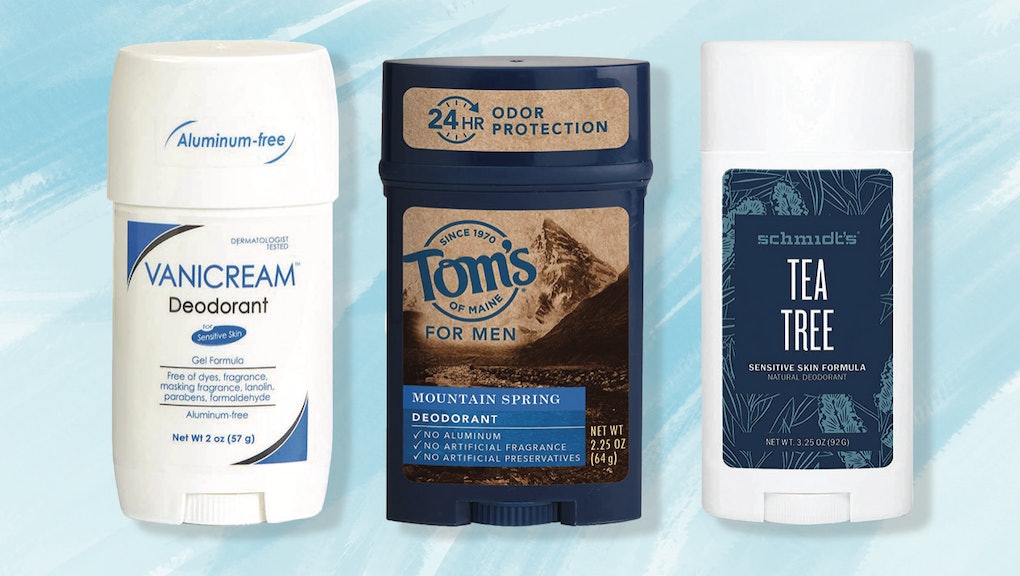 The 4 best deodorants for men with sensitive skin

If you have sensitive skin, a deodorant that seems to work well for everyone else can often leave you with itchy or stinging pits. When you’re shopping for the best deodorants for men with sensitive skin, look for formulas that skip potentially irritating ingredients like fragrance, aluminum, baking soda, and alcohol.

While they’re often packaged together in the same product, deodorants and antiperspirants don't serve the same purpose. Deodorants typically prevent your pits from getting smelly by eliminating the bacteria that contributes to odor, but they don’t keep you from sweating. They commonly include some kind of fragrance as well to keep things smelling fresh. Unfortunately, fragrance can cause irritation for sensitive skin, so you may want to choose a fragrance-free formula (not to be confused with "unscented" formulas, which believe it or not sometimes do contain fragrance).

Antiperspirants, on the other hand, aim to stop sweat at its source by using aluminum-based compounds to plug sweat ducts, which can be irritating for some people with sensitive skin. Many natural deodorants are formulated without aluminum, and some include sweat-absorbing ingredients, like arrow-root powder, which won't be as effective against sweat as aluminum-based antiperspirants, but might make you feel more comfortable.

Natural deodorants often contain baking soda too, which can also cause skin irritation, so you may want to steer clear of this ingredient if you’re going the natural route. Alcohol is another ingredient you may want to avoid in deodorant or antiperspirant, as it can make dry skin even dryer.

Of course, everyone's body chemistry is different, and a deodorant that works well for one person may irritate or leave another person with funky odor. That's why you should always do a patch test first before committing to a new product. If possible, you may even want to opt for a travel-sized version to start so you don't blow your budget or create excess waste while trying to find the right deodorant.

With that in mind, read on for four men's deodorants that work great for sensitive skin, according to reviewers on Amazon.

1. The deodorant with only 5 ingredients

If you suffer from a variety of skin sensitivities Vanicream's Aluminum-Free Deodorant has a simpler formula of only five ingredients. It's specifically formulated for sensitive skin and free of aluminum, alcohol, and baking soda. It's also free of fragrance, which means that despite helping to prevent odors from forming, it won't mask existing odors. So make sure to apply it to clean, dry skin for the best results. This deodorant is a clear gel stick, rather than a solid stick, which some Amazon reviewers didn't love. But overall, it's a popular choice on the site with hundreds of five-star ratings.

One reviewer says: “Finally no under arm rash! Thank you!”

2. The deodorant that absorbs sweat

Schmidt's Tea Tree Sensitive Skin Deodorant Stick is a gentle option made from plant-based ingredients, and it doesn't contain aluminum, alcohol, or baking soda. It won't prevent you from sweating, but its formula includes plant-based powders that can help absorb moisture to keep you dryer.

It also has tea tree oil (known for helping kill the bacteria that contributes to odors), plus coconut oil and shea butter (both known to be moisturizing). It isn't scented with artificial fragrances, but it's not unscented either — essential oils give it a fresh, natural fragrance.

One reviewer says: “Love this, it's natural and smells great. I have very sensitive skin and [tend] to react to most natural deodorants but haven’t with this one.”

Natural deodorants can be expensive, but Tom’s Long Lasting Wide Stick Deodorant is both budget-friendly (at about $4 per stick) and effective against odors. The primary odor-fighting ingredient in it is hops, making it a fun deodorant choice for beer-lovers. It also contains aloe and sunflower seed oil to soothe and moisturize skin.

This deodorant gets its fresh scent from natural ingredients rather than artificial fragrances, and it comes in three earthy variations: mountain spring, deep forest, and north woods. According to reviewers, the scent tends to fade as the day wears on, so you may want to occasionally reapply it.

One reviewer says: “It doesn't irritate my sensitive skin and never leaves any white streak on my clothing.”

If you suspect that artificial fragrance (not aluminum) is the cause of your skin's irritation, try Speed Stick's Power Unscented Antiperspirant Deodorant. The unscented, aluminum-based formula is free of artificial fragrance, according to the manufacturer, and it helps fight sweat and odor for up to 24 hours.

Reviewers noted that this combination antiperspirant and deodorant is truly scent-free as advertised, making it a great option for anyone with sensitive noses too. And, at this price, you won't regret stocking up.

One reviewer says: “Great [...] Keeps me dry without adding any scents! No rashes from this one.”

More like this
A mother and daughter have been charged with murder after performing a back alley butt lift
By Melissa Pandika
What is sploshing, the food fetish that's taking over TikTok?
By Melissa Pandika
This anxiety study is a really passive-aggressive reminder that wealth equals happiness
By Ian Kumamoto
Stay up to date