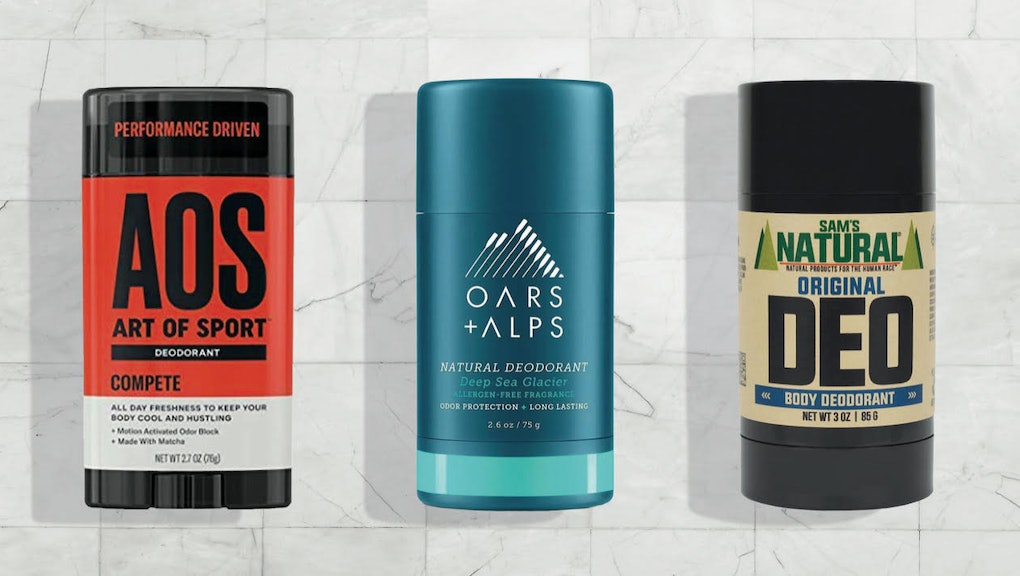 The 4 best natural deodorants for men

Whether you have sensitive skin or you simply want to limit the amount of chemicals you put in and on your body, natural deodorant can provide an excellent alternative to traditional sticks — though finding one that works for your pits can feel like an impossible task. The best natural deodorants for men use ingredients like baking soda, arrowroot powder, and cornstarch to absorb sweat and help control odor.

Before shopping around, it's helpful to understand the difference between deodorant and antiperspirant. The former, which is the focus of this article, simply neutralizes odor and absorbs perspiration, while the latter actually stops sweat at its source by blocking pores. In other words, natural deodorants won't actually prevent you from sweating in the first place.

Another thing worth noting is that there's no regulated definition of "natural" when it comes to skin care products. For the purposes of this list, "natural" refers to deodorants that don't use aluminum, parabens, or phthalates — the most common chemicals found in traditional deodorants.

Keep in mind that everyone's skin and body chemistry is different and there's no one-size-fits-all deodorant; an option that works flawlessly for one person could have no effect for another. Since natural deodorants can give some people rashes — especially ones that contain baking soda — it's always a good idea to do a small patch test first. Natural deodorants also frequently use coconut and palm oil, which can sometimes stain or discolor clothes. For that reason, you should follow the deodorant's application instructions closely, avoid applying more than needed, and give it a moment to dry before getting dressed.

Below is a list of the best natural deodorants on Amazon. While some are described as being specifically formulated for men, the only real difference is the scents, which tend to be musky and earthy rather than sweet and floral. All of them, however, are suitable for anyone with armpits.

With a scent that blends mahogany with subtle hints of vanilla, Sam's natural deodorant not only works to control sweat and odor, but it smells great, too. The popular deodorant, which boasts over 2,000 reviews on Amazon, is formulated with arrowroot powder and baking soda (a combo that absorbs moisture and neutralizes odor).

On top of that, it has coconut oil which is believed to kill bacteria and prevent fungal growth — though this does mean it could stain your shirts if you're not careful. Other ingredients include pumpkinseed oil, shea butter, rosemary, tea tree oil, and aloe vera. In addition to being free of aluminum, phthalates, and parabens, this deodorant also forgoes sulfates and dyes (two ingredients that some people can be sensitive to).

One reviewer says: "I was always the stinky kid. I tried every clinical strength deodorant on the market and nothing ever helped. [...] This is literally the best thing that ever happened to my [underarms]! I can put the product on in the morning and still the next morning there is no smell! For the first time in my life a feel confident!"

This aluminum-free natural deodorant features a blend of baking soda and tapioca starch to absorb moisture and reduce odor. It's also made with antimicrobial coconut oil and nourishing shea butter, giving it a subtle vanilla-coconut aroma. The smooth stick, which glides on easily and effortlessly, has a virtual cult following on Amazon where it's racked up thousands of five-star reviews. It's also free of parabens, sulfates, and phthalates.

One reviewer says: "It is the BEST natural deodorant I have ever used and I’m a SWEATER. I never stink, even after a long kickboxing or spin class. Plus it’s easy on my sensitive skin. Highly recommend!!"

3. The one for sensitive skin

If your armpits react negatively to baking soda, this is one of the best natural deodorants for sensitive skin. Rather than baking soda, which can cause skin irritations for some people, this formula relies on corn starch to soak up sweat and keep you dry. It also has aloe, palm, and alpine caribou moss. Reviewers noted that it glides on clear without feeling chalky, and it smells great, too.

One reviewer says: "I have very sensitive skin and was having trouble finding a deodorant that worked and did not cause me to break out. I have been using it for over a month, and I have had no issues, and it works!"

For athletes and extra heavy sweaters, this diesel clear stick ranks among the best natural deodorants on the market. In addition to moisture-absorbing arrowroot powder, it has matcha, citrus, and green pear, which lend it a fresh, energizing feel. It's free of aluminum, phthalates, and parabens, and it goes on clear without staining your shirts, according to dozens of reviewers.

Like the previous choice, it's also baking soda free; however, it's not fragrance-free so it may still irritate some sensitive skin. (Just note that this brand makes an almost identical-looking antiperspirant that does contain aluminum).

One reviewer says: "I've been using this deodorant exclusively for months, and it's still working great for me. No stains, no negative reactions to it. Still keeping me fresh all day even through exercise. One stick lasts a very, very long time too!"