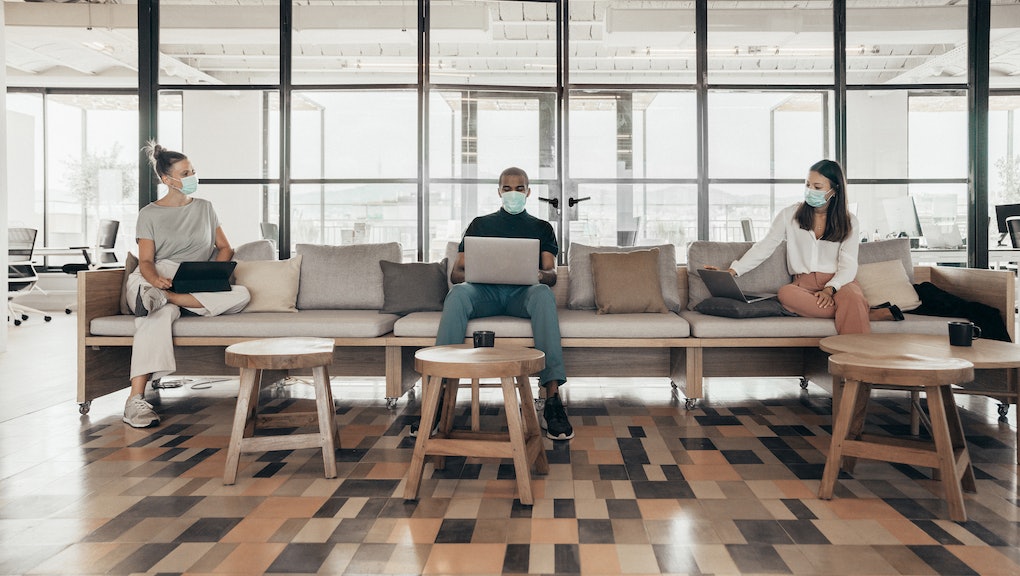 At this point in the pandemic, following the CDC guidelines to stay six feet away from those outside our households has become instinctual for many of us. But now, new research adds an extra layer of nuance to this recommendation. New findings suggest that the six-foot rule does does not offer as much protection from viral exposure in indoor spaces as widely thought, Insider reported.

In a study published online in the Proceedings of the National Academy of Sciences last week, MIT researchers Martin Bazant and John Bush developed a model to predict the length of time it would take for someone to be exposed to dangerous levels of the SARS-CoV-2 virus from an infected person entering an indoor space. The model assumes that the air in the room is well-mixed and accounts for the room’s size, the number of people it contains, whether they’re wearing masks, what they’re doing, and the type of ventilation.

Depending on these factors, Insider noted, the exposure level may still be high in some rooms, even if the people occupying them are more than six feet apart. "The distancing isn't helping you that much, and it's also giving you a false sense of security because you're as safe at six feet as you are at 60 feet if you're indoors,” Bazant, a professor of applied mathematics at MIT, told CNBC. “Everyone in that space is at roughly the same risk, actually.”

CNBC gave the example of an infected person wearing a mask and singing loudly in a room. Someone on the other side of the room isn’t more protected from the virus than someone six feet way from the infected person, the outlet explained, highlighting the fact that how long you stay in a room with an infected person plays a bigger role than how far you are from them. Bazant and Bush created a website that allows you to run their model by adjusting factors like age group and behavior to come up with guidelines to minimize transmission in different indoor spaces.

It’s important to note that the findings do not mean that “distance doesn’t matter,” indoors, as Zeynep Tufekci, an associate professor at the School of Information and Library Science at the University of North Carolina at Chapel Hill, pointed out on Twitter. Rather, she tweeted, they mean that particularly if you stay in a poorly-ventilated indoor space long enough, distance isn't completely protective.

Early on in the pandemic, the prevailing thought was that SARS-CoV-2 spread primarily through heavier droplets produced by sneezing, speaking, or breathing, Insider said, but evidence has pointed to the role of airborne transmission of lighter aerosol droplets. Bazant and Bush wrote in their paper that aerosol droplets remain suspended for long periods of time in rooms where the air is constantly mixing. Their paper focused on this mode of transmission.

Aerosol droplets can slowly fall to the ground in calm environments, Insider explained, but can stay aloft and mix throughout the room for extended lengths of time. The outlet pointed out that ventilation can remove them from the circulating air. Tufekci cited a tweet by Kimberly Prather, an atmospheric chemist at the University of California, San Diego, which explained that aerosol droplets can accumulate over time in rooms with poor ventilation, which explains why how long you spend in these spaces seems to be a more important factor to consider than how far you are from others when it comes to assessing exposure risk indoors.

The science of airflow dynamics also challenges existing rules for social distancing outdoors. “The infected air would be swept away and very unlikely to cause transmission,” Bazant told CNBC. “There are very few recorded instances of outdoor transmission.” Crowded outdoor spaces could pose more of a risk, but he noted that he’d feel comfortable as long as people stayed around three feet apart from each other, “even without masks, frankly.”

Hot Vax Summer might be upon us, but until enough of us get jabbed, you might want to interpret these findings as a sign to take advantage of the warm weather and hang with your squad outdoors as much as possible.

More like this
India's failed COVID response leaves young people scouring social media for oxygen
By Urmi Bhattacheryya
Remember the vaping crisis? Well, it hasn't gone anywhere
By Melissa Pandika
The CDC just announced the mask era is coming to an end (sort of)
By Rafi Schwartz
Stay up to date