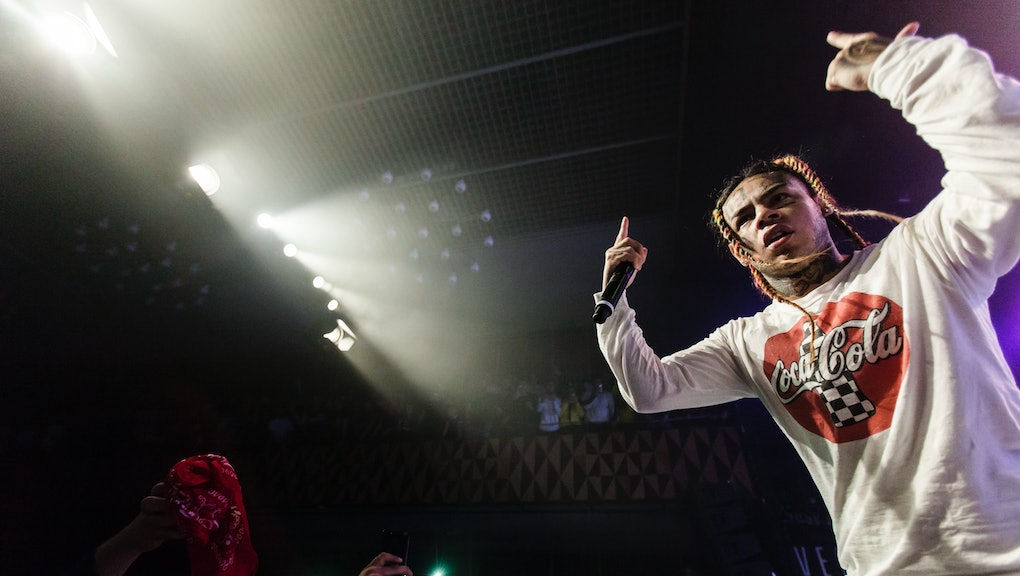 However antiquated the format, artists still really care about the Billboard charts. On Monday, Ariana Grande and Justin Bieber’s “Stuck With U” topped the Billboard Hot 100. Two artists you’d expect to find there without incident, especially when the song in question is a charity single to benefit the First Responders’ Children’s Foundation. It was each artists’ third no. 1 debut, which ties them with Mariah Carey and Drake.

Tekashi 6ix9ine, the Brooklyn rapper who was recently released earlier than expected from prison last month due to coronavirus concerns (he's asthmatic,) was incredibly fired up about the result. His first single following his release, “GOOBA,” finished at no. 3 on the charts ending May 18th. In the days leading up to the latest Hot 100 chart, 6ix9ine waxed conspiratorial on his Instagram, scrolling through apparent forecasting data on his phone that showed “Stuck With U” clocking a few spots behind “GOOBA” and the reigning champ, Doja Cat and Nicki Minaj’s “Say So,” at no. 5. “YOU’RE A LIE AND CORRUPT. YOU GOT CAUGHT CHEATING AND THE WORLD WILL KNOW,” he wrote about Billboard in one Instagram post.

The rapper with a disturbing legal history latches onto the claim that 60,000 units for “Stuck With U” were added at the eleventh hour, with 30,000 copies purchased from just six credit cards. 6ix9ine doesn’t have any corroborating evidence for this detail, although Billboard and Bieber would later acknowledge that 60,000 units came in on the final day of tracking, because that’s just how these things tend to work.

After the results were met with pushback on Monday, the Billboard staff published an article detailing the process behind calculating charts for this week and any other. The post tackled each of 6ix9ine’s claims about alleged manipulation, from the unverified forecast changes to new units added at the last minute. In short, Billboard doesn’t distribute or create chart forecasts throughout the week to labels or management companies — those are generated by third parties with access to sales data, however unreliable those might be.

Billboard also explains the change in “Stuck With U” sales in the last 24 hours. “The sales spike is likely referring to sales on Thursday, May 14—the final day of the tracking week—when signed “Stuck with U” singles were put up for sale in Grande and Bieber’s webstores,” writes Billboard. “A signed single or album is an accepted form of sales available to any artist and has been noted repeatedly within Billboard chart stories when such items have impacted the Hot 100.” The post notes that 6ix9ine did the exact same thing, by releasing a CD single/digital download on his webstore that day, they just weren’t signed copies. Billboard also verifies that all bulk purchases are audited by the company and Nielsen, so any sort of 6 card-30,000 single transactions would’ve been flagged.

In Grande’s Instagram post celebrating her third debut in the top spot, she also addressed 6ix9ine’s allegations. “My fans bought the song. JUSTIN’S fans bought the song. OUR fans bought this song (never more than four copies each, AS THE RULES STATE). they are ride or die motherfuckers and i thank god every day that i have them in my life,” she wrote. “Congratulations to all my talented ass peers in the top ten this week. even number 3.”

Bieber also entered the chat, writing a lengthy post on his Instagram story about the chart drama. He echoed many of Billboard’s claims about the last-minute 60,000 units and tried to draw some of the ire back his way. “If you gonna say her name make sure you say mine because it’s our song.”

6ix9ine wasn’t finished, of course, sharing a few more posts about the chart dispute and explaining that he wasn’t out to get Grande or Bieber, but Billboard. In the most recent video, he includes footage of his childhood home, contrasting his upbringing with footage of Grande’s starring roles on Nickelodeon. “YOU ARE VERY TALENTED AND BEAUTIFUL GOD BLESS YOU. But you will NEVER UNDERSTAND MY PAIN,” he writes in the caption. Something tells me it won’t be the last we hear about this!

6ix9ine correctly identifies a rigged game, if the specifics of his complaints tend to misfire. Stans stream singles on multiple devices throughout the day to juice numbers, and artists — like Grande, Bieber, and himself — routinely sell physical versions of these songs at the eleventh hour to give them a final push. The charts have been easily manipulated and not always reflected the most popular song in the country for about as long as they’ve existed. (Remember when “Gangnam Style” couldn’t hit no. 1 despite every indication that it should? Simpler times.) This time, at least, he just doesn’t seem to like who’s best figured out the manipulation.