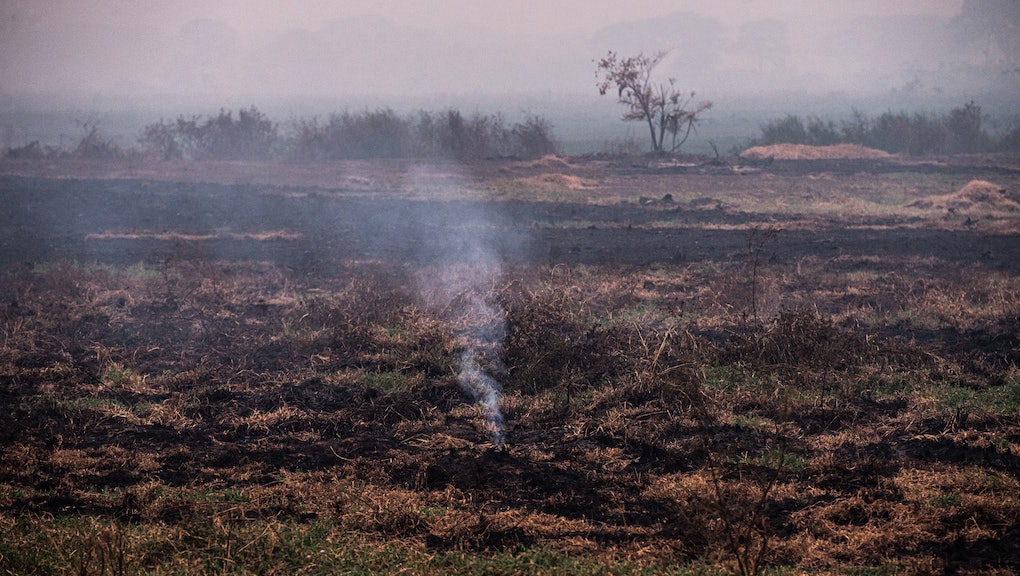 The Amazon is on the verge of becoming a savannah, a dire new study warns

Rising temperatures spurred by climate change have disrupted rainfall patterns in the Amazon to such an extent that 40 percent of the forest is on the cusp of becoming a savannah within decades. These findings, published in the journal Nature Communications on Monday, are especially shocking, as most predictions had assumed these changes would occur closer to the end of the century. Unless global leaders take action to prevent deforestation and the rise in temperatures, the report found, wildfires will burn down existing trees in the rainforest, and the lack of rain will prevent the forest from growing back.

This year, the Amazon rainforest burned from over 500 major wildfires intentionally set by miners, farmers, and ranchers looking to clear out land for themselves. Their actions are illegal and put indigenous lives at risk, but Brazil's far-right president, Jair Bolsonaro, has opted to open the rainforest to further development instead of putting a stop to deforestation. He has repeatedly shown open disdain toward conservation efforts, blamed indigenous tribes for fires and called them "burdens" on the country, and lashed out at global criticism of his policies.

This mindset doesn't bode well for the future of the Amazon rainforest. While other rainforests around the world can rely on the ocean for moisture, the Amazon primarily relies on its own tree canopy to trap moisture and create its own rainy weather. If humans continue to cut down trees, and the Earth continues to warm, the worsening conditions will make it harder for the region to grow back into a forest.

"The dynamics of tropical forests are interesting," the lead author of the study, Arie Staal, told Phys.org. "As forests grow and spread across a region, it affects rainfall — forests create their own rain because leaves give off water vapor, and this falls as rain further downwind. Rainfall means fewer fires leading to even more forests."

Based on the researchers' simulations, they were able to see what would happen if these forests shrunk instead of grew.

"As forests shrink, we get less rainfall downwind," observed Staal, "and this causes drying leading to more fire and forest loss: a vicious cycle."

This sensitivity to such rapid changes is what puts rainforests at risk of becoming savannahs — grassy plains sparsely populated with trees. Once a rainforest becomes a savannah, it's not likely to revert back.

The loss of the Amazon rainforest would obviously be devastating to Earth. It is home to a huge amount of biodiversity, including animal and plant species unique to the area, as well as indigenous peoples who depend on the forest to maintain their traditions. The rainforest also contributes to balancing global carbon levels, a natural system that might be in jeopardy if the forest no longer has the size or the trees to help.