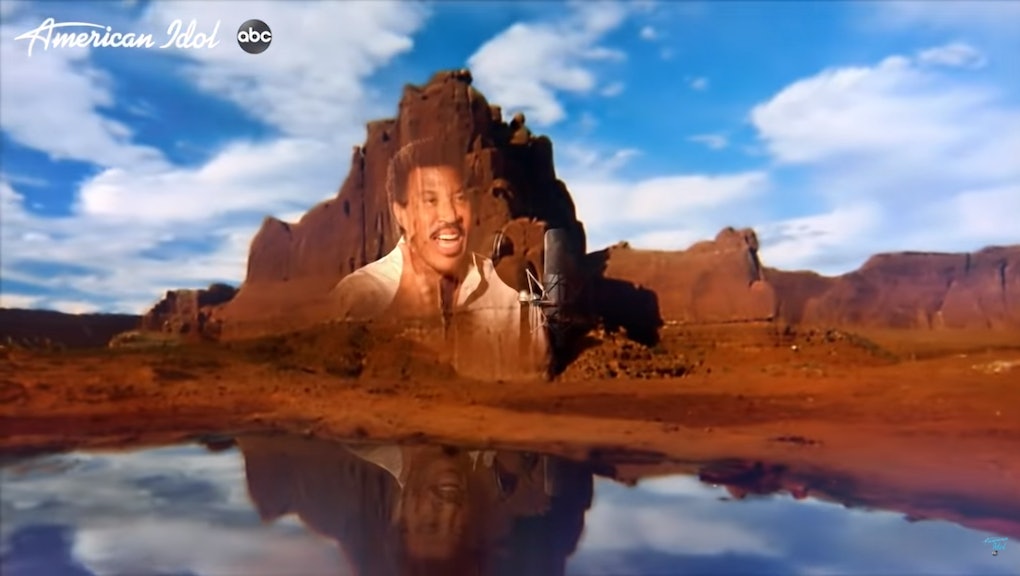 The 'American Idol' remote finale was a beautiful disaster

There was always potential for the American Idol remote season to go haywire, but I don’t think anyone anticipated how far its finale would fly off the rails. On Sunday night, the 21-year-old singer Just Sam became the 18th overall winner — and first winner to be crowned via webcam — in series history. Somehow, this was maybe the fifth most noteworthy thing to happen during the show’s final moments.

Near the end of the program, Ryan Seacrest was segueing from a performance by Cynthia Erivo, who was there to promote her new Aretha Franklin National Geographic series, Genius: Aretha, and something seemed very off. Seacrest’s left eye became noticeably swollen, as his speech grew increasingly delayed and stilted while talking about Erivo. Although fans on Twitter speculated a medical emergency, the consummate show-must-go-on TV guy continued with the results anyway. (On Monday morning’s Live with Kelly and Ryan, Kelly Ripa reportedly said that Seacrest had to miss the show after a late night at work on Idol.)

The results came with their own set of confusion. When Seacrest began to narrow down the contestants from five to a final two, he called the name of contestant Arthur Gunn as the first finalist. His family, all on camera with Gunn, appeared to start their celebration as if he’d been crowned the winner, popping champagne and firing off a confetti cannon. Seacrest tried to reign them in over the camera, before announcing Just Sam as the second finalist.

After Seacrest had announced Just Sam as the winner, Gunn and his family still looked to be celebrating on camera, while Just Sam basked in the shock, with her grandmother celebrating from an iPad she held on camera. Just Sam, who lives in Harlem and sang in subways before her Idol appearance, was quarantining in Los Angeles since the stay-at-home orders went into effect. It was an incredibly awkward climax, with the dueling celebrations, Seacrest attempting to interview Just Sam’s grandma through two sets of webcams, and the judges’ mostly detached reaction shots. The show’s voyage into the uncanny was just getting started.

After briefly talking with Just Sam and her grandmother, Seacrest swiftly wrapped things up and transitioned to a pre-taped performance of “We Are the World.” This isn’t your average telethon fare, though. You might remember that just last week, Dem establishment brainlord Lis Smith suggested that they project an enormous Joe Biden against the Grand Canyon — something like Travis Scott’s Fortnite takeover — for the Democratic National Convention. In less than a week’s turnaround time, American Idol’s finale actually did this, with the show’s judges, contestants, and prior winners garishly projected on recognizable American landmarks. The video eases you in, with Richie — who co-wrote the 1985 charity single with Michael Jackson — and Just Sam singing in front of a black backdrop. Okay, pretty normal, somber, at-home performance fare.

It quickly builds to a crescendo, with a number of recent contestants I definitely do not recognize embedded onto places like Grand Central Station, the Capitol building, and, jaw-droppingly, a US Naval Hospital Ship. You see some familiar faces — Jordin Sparks is here, as are Ruben Studdard and Fantasia — leading up to a truly psychedelic showcase for the judges. Luke Bryan and Katy Perry are suddenly animated trees, like plasticized, emoting Ents from The Lord of the Rings. All of this season’s finalists are eventually blasted onto jagged rock structures at the Grand Canyon, saving the best for last — Richie giving an emphatic thumbs up, who’s come to embrace his fate as a massive slab of rock.

I’ve sometimes been guilty of pandemic desensitization, getting lulled into a state of not appreciating how unstable and strange everything is right now. And then something like the American Idol finale comes along and snaps me right out of it.

More like this
The 8 best reality shows you're not watching, but should be
By Brandon Yu
What's next for the #FreeBritney movement's most devoted supporters?
By Jamie Lee Curtis Taete
The reason Simone Biles quit was more heartbreaking than we could've ever imagined
By Brandon Yu
Stay up to date