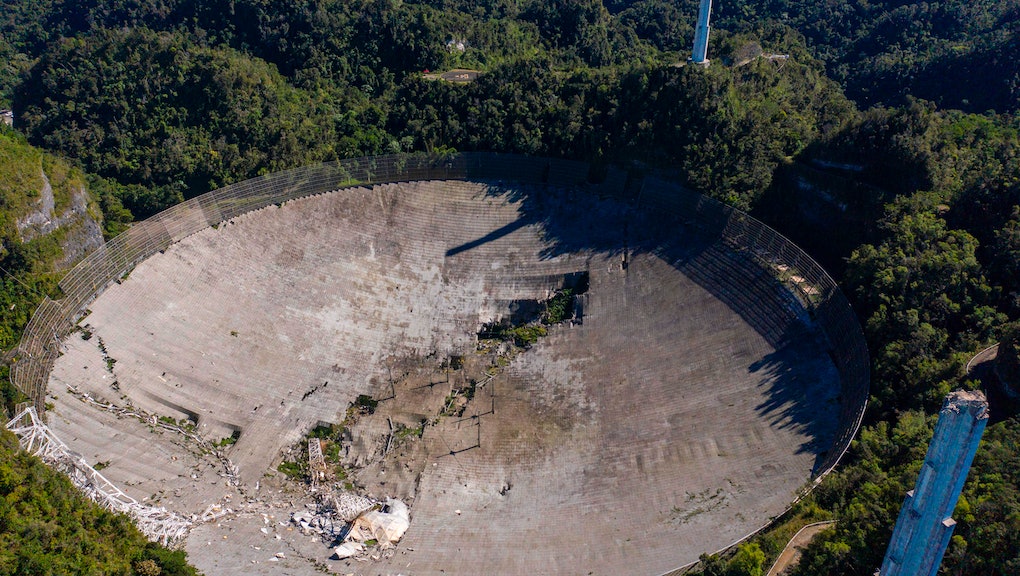 The Arecibo Observatory, which helped humanity search for aliens, has collapsed

Update 12/3: The National Science Foundation on Thursday released drone footage of the moment the observatory collapsed. It is exactly as shocking as you might imagine.

Puerto Rico's Arecibo Observatory was an invaluable tool for humankind. Since its opening in 1963, it enabled countless discoveries about space and the wider cosmos around us. Unfortunately, over the years the facility fell into disrepair and, after natural disasters like Hurricane Maria in 2017 and earthquakes in 2019 and 2020, recovery funds were slow to materialize. Finally, on Tuesday morning, the suspended platform that was held above the observatory by cables collapsed. The 900-ton platform fell over 450 feet into the radio dish below. No injuries were reported.

The event marks a heartbreaking end for both the scientific community and Puerto Ricans.

To put it simply, the observatory was used to help scientists better understand what we see in outer space. It was instrumental in studies that found evidence of ice on Mercury, observed asymmetrical neutron stars, and searched for new planets around stars outside of our solar system. Most notably was the observatory's use in trying to communicate with aliens back in 1974.

The structure itself held a bit of star power, too. It popped up as locations in movies like Golden Eye, Contact, and Species.

Arecibo endured decades of underfunding that ultimately impacted its overall condition. When Hurricane Maria came through in 2017, one of the cables holding the platform snapped off, punching a hole into the radio dish. Funds for repair lagged, but engineers had hoped to eventually fix it.

Then, a second cable broke.

When the second cable broke in early November, engineers realized the situation was irreparably dire. It had gotten to the point where it was too dangerous to send people up to repair the cables.

Within the month, the National Science Foundation, the organization that owns the facility, made the decision to decommission and demolish it before it could collapse. The decision was met with pushback from the local and scientific communities, who wanted to see the building saved.

In the end, gravity made the final decision.

The scientific and cultural significance of the Arecibo Observatory won't be forgotten.

"As someone who was inspired as a child by the observatory to reach for the stars, this is devastating and heartbreaking," planetary scientist Edgard Rivera-Valentin told National Geographic when news of its demolition emerged in November. "I've seen how the observatory to this day continues to inspire my island."

When the platform collapsed, Rivera-Valentin reacted on Twitter, saying they were "heart broken, sad, in mourning, and crying," while adding they "really hate[s] this year."

It's a sentiment too many communities can relate to.